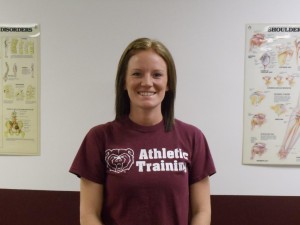 Spenser explains that now as President, she is excited to make efforts to increase the involvement of students within District V and also to help develop more fun and educational opportunities for students at the district meeting.

When asked about the actions that led Spenser to her new role as President, she explains that there have been a number of ways she has been involved with the District V council to this point.  She explains that last academic year, Amber Wilson, SMAT 2012 alumni and former council member on the District 5 Student Leadership Council Board encouraged Spenser to apply for a position.  In the Fall of 2012, Deeken applied for and as elected to serve as one of the two secretaries for the 2012-2013 school year.  During this time, she participated in monthly District conference calls and had a large part in planning the student section of the District meeting in Tulsa.  As this term neared an end, she felt that her experience, along with her enthusiasm would enable her to be a great President! 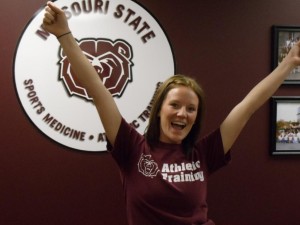 Spenser is excited about beginning her term as President and states “I am looking forward to working with the new council members and making this an enjoyable year!”

The Sports Medicine and Athletic Training Department congratulates Spenser Deeken on her achievement and looks forward to seeing her in action as the new President!   She will be replacing Stephanie Swartzwelder, 2013 SMAT graduate who has made significant contributions in her term and represented District 5 Student Leadership Council very well.