When I started to searching about Vietnam and places to go, I find out there are lots of Chinese characters in some traditional buildings, like this one. 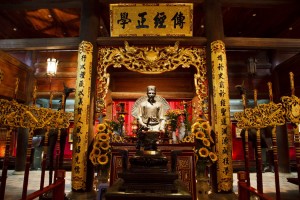 Thus, I started to research more about the connections between Vietnam and China.

The bilateral relations between Vietnam and China have been turbulent, despite their common socialist background. I’m not going to talk about the political issues or situations here because I don’t know much about it. However, I do want to talk about the culture since that’s the main reason I’m going there.

Vietnam’s culture has developed from the indigenous culture, which is an East Mountain Culture,  with wet agriculture because of its climate. Some national elements were influenced by Chinese culture. For example, its traditional political system and philosophy were influenced by Confucianism and Taoism.

It is so fascinating that we have so many similarities that makes me feel comfortable going. Also, there are a lot of differences between us, which makes this adventure exiting.

By the way, this is a really good website to find out about traveling stuffs.