the Cu Chi tunnels Is not only to provid underground shelter, But also served a key role during combat operations, including as a base for Communist attacks against nearby Saigon.

The tunnels were dug with simple tools and bare hands during the French occupation in the 1940s, and further expanded during the Vietnam War in the 1960s to provide refuge and a defensive advantage over the American soldiers. 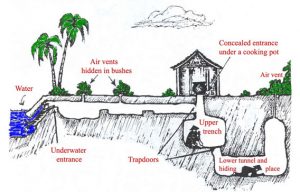