Hello! It’s nice to meet everyone! My name is Brittany and I am going to KCP International Language School through Missouri State University for Japanese Language and Culture Credit. I have an Individualized Major in Japanese Language and TESOL. I will be in Tokyo, Japan from October 6th – June 20th 2015. I hope I can share my adventures with you!

To start things off, our first culture trip was to Meiji Jingu Shrine and Harajuku’s Takeshita Dori street! Let me share some photos from each location! 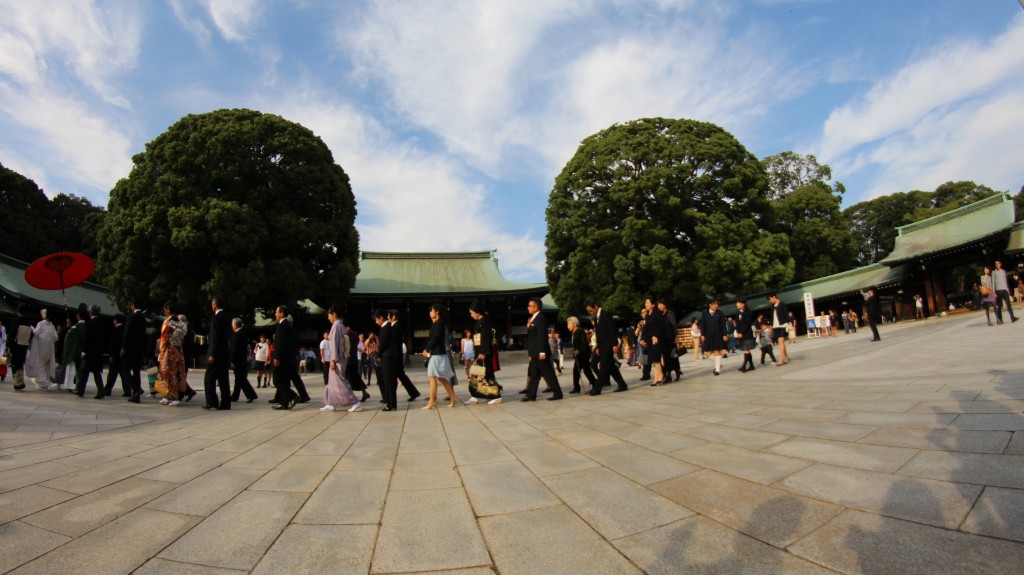 There were many traditional weddings taking place that day. 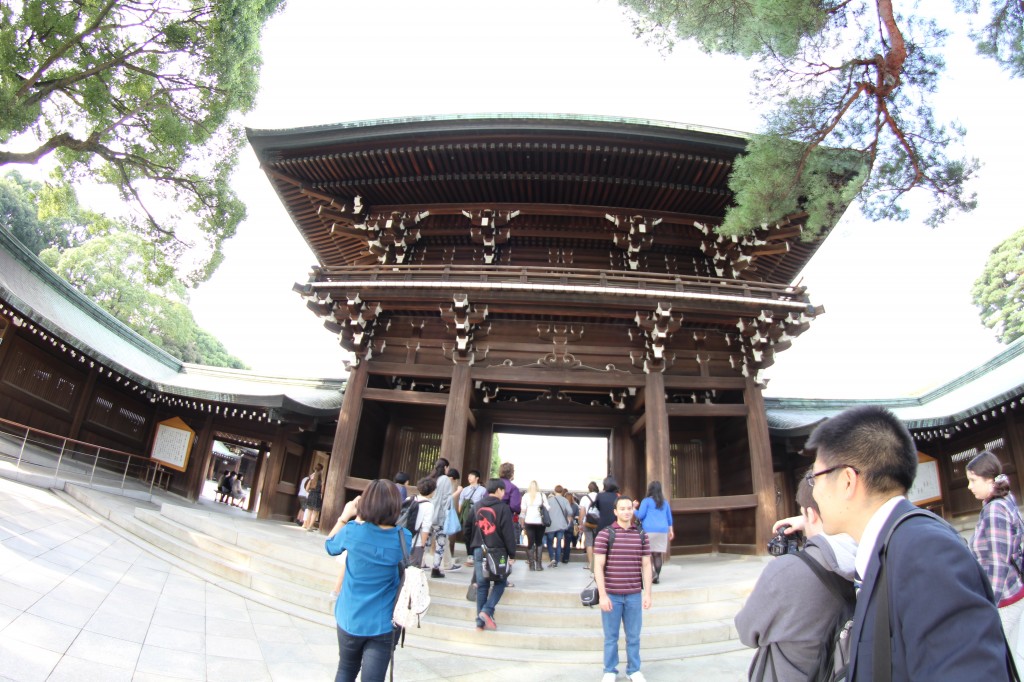 Entrance to the shrine. 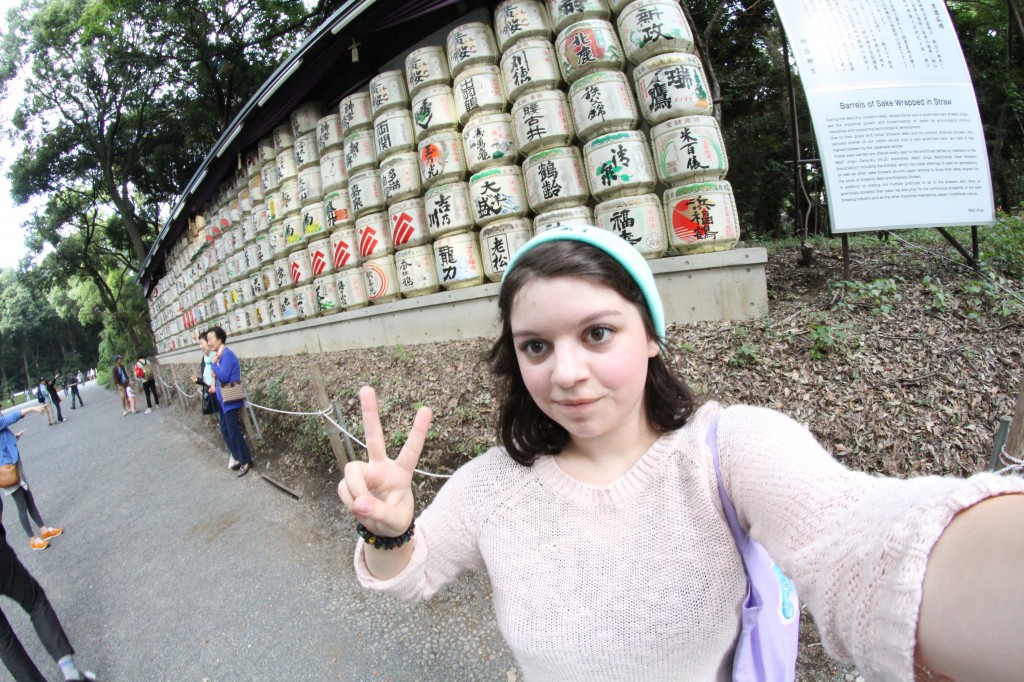 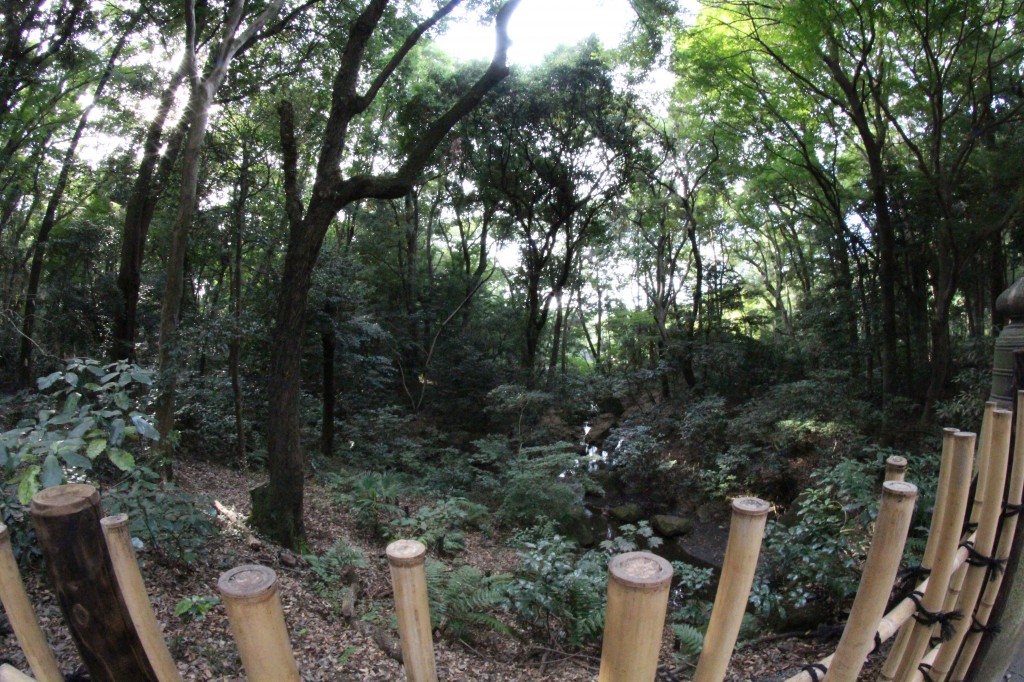 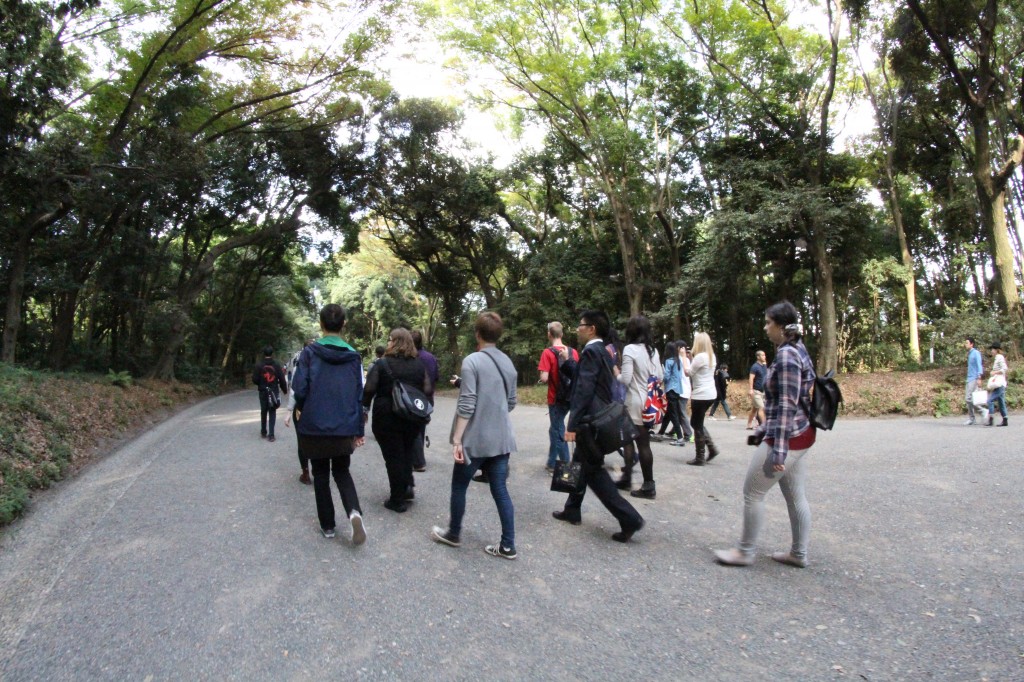 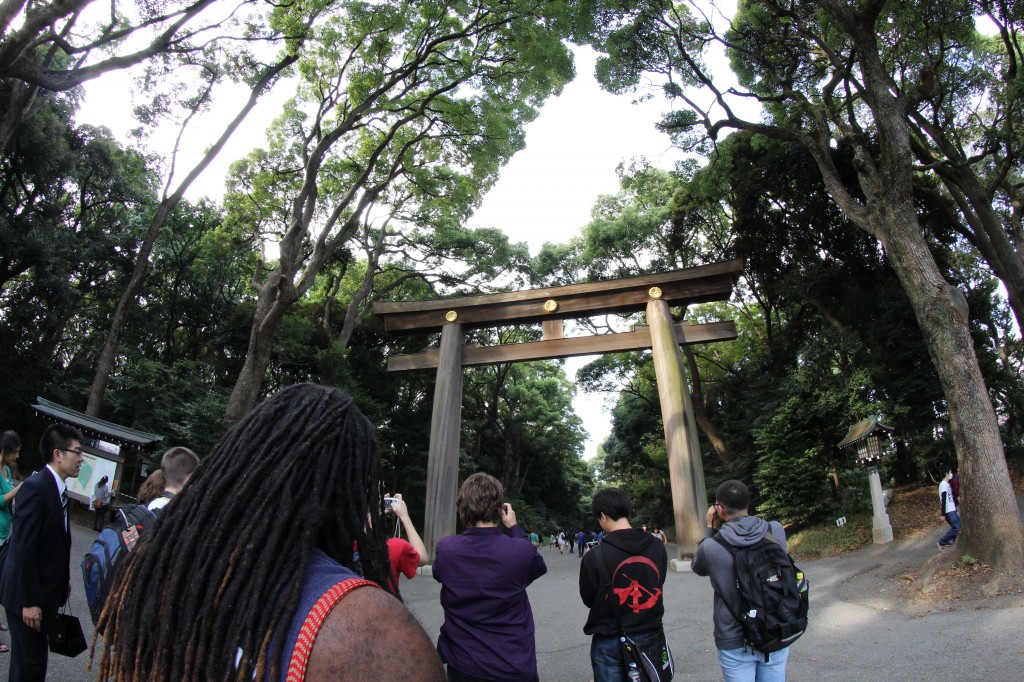 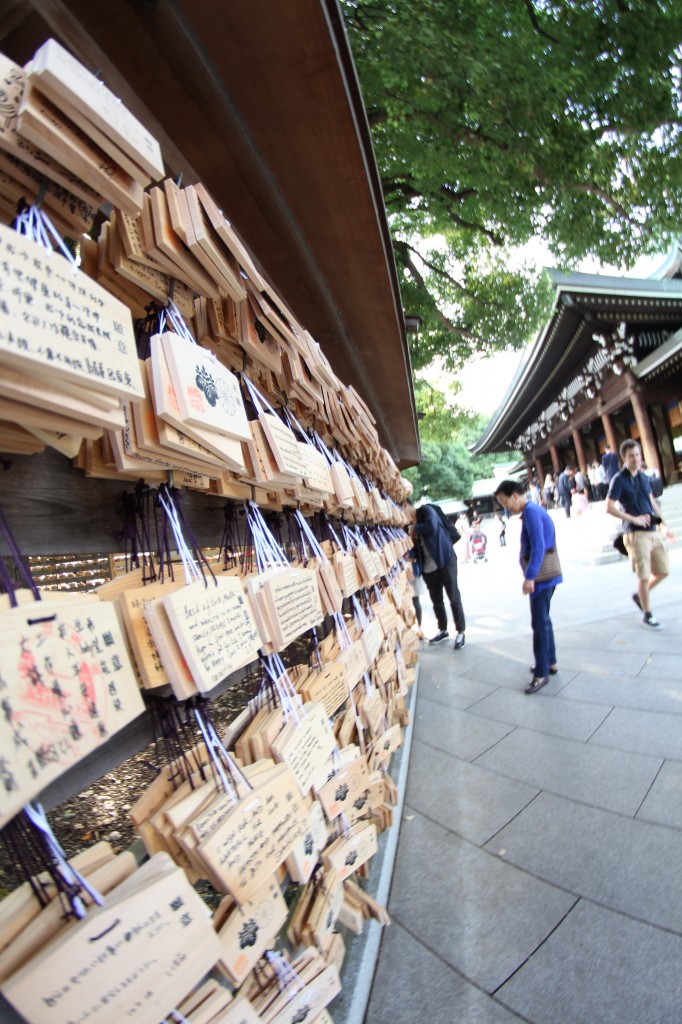 Ema Votive Tablets. Write your wishes to the gods! 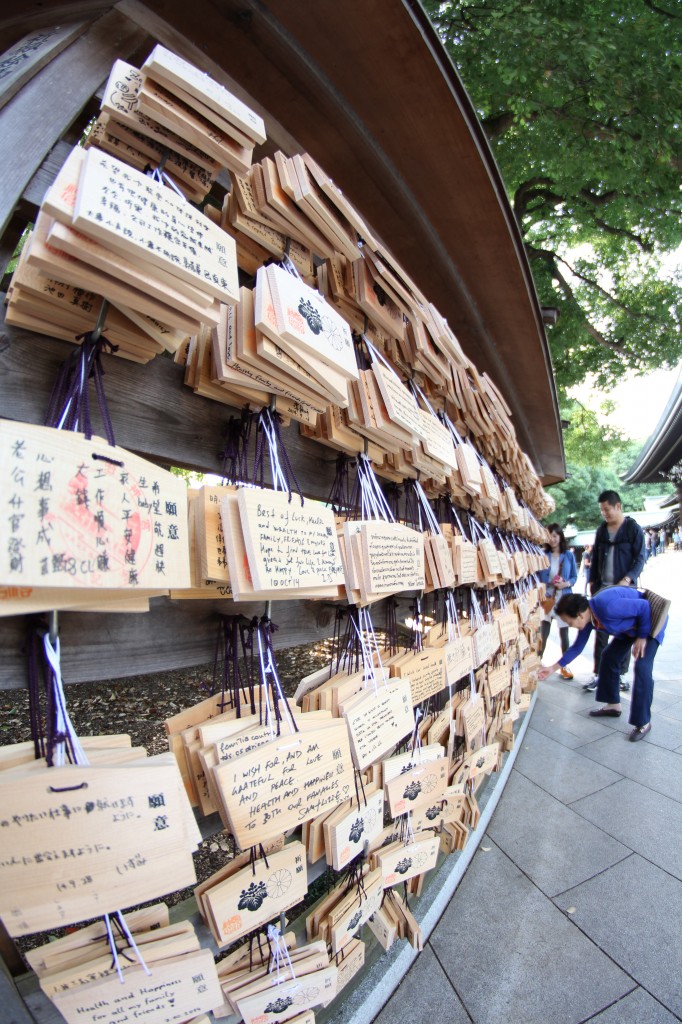 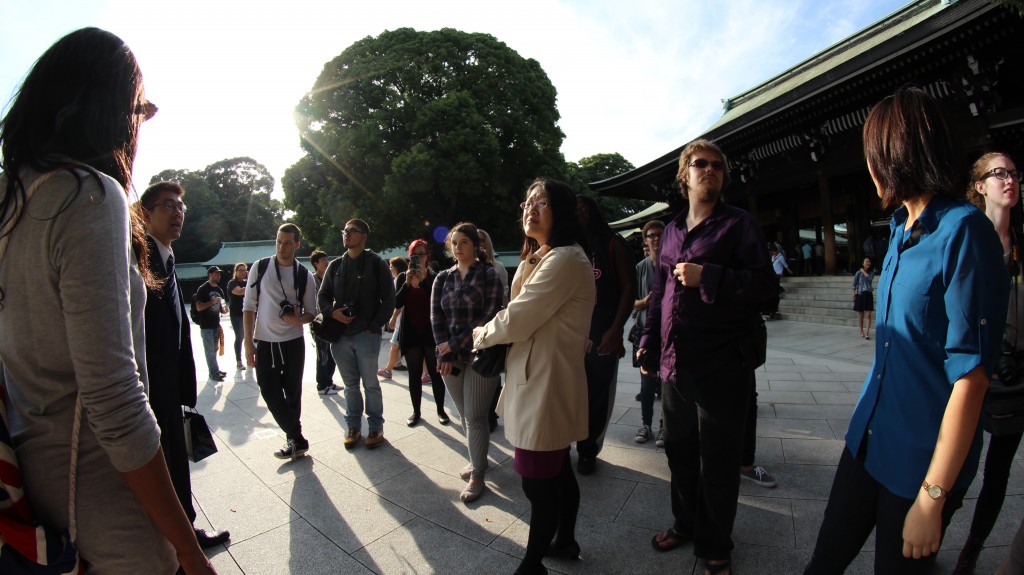 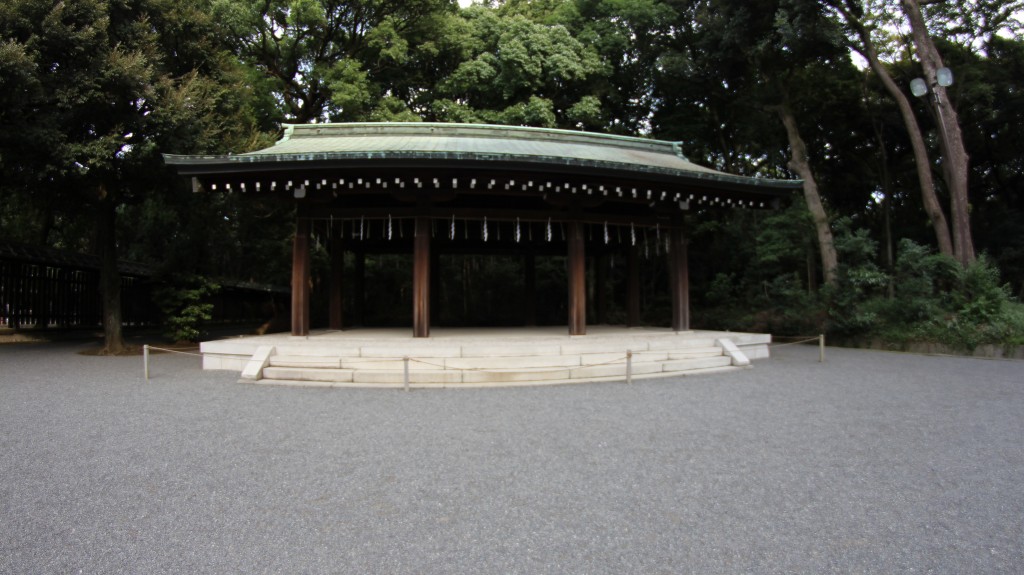 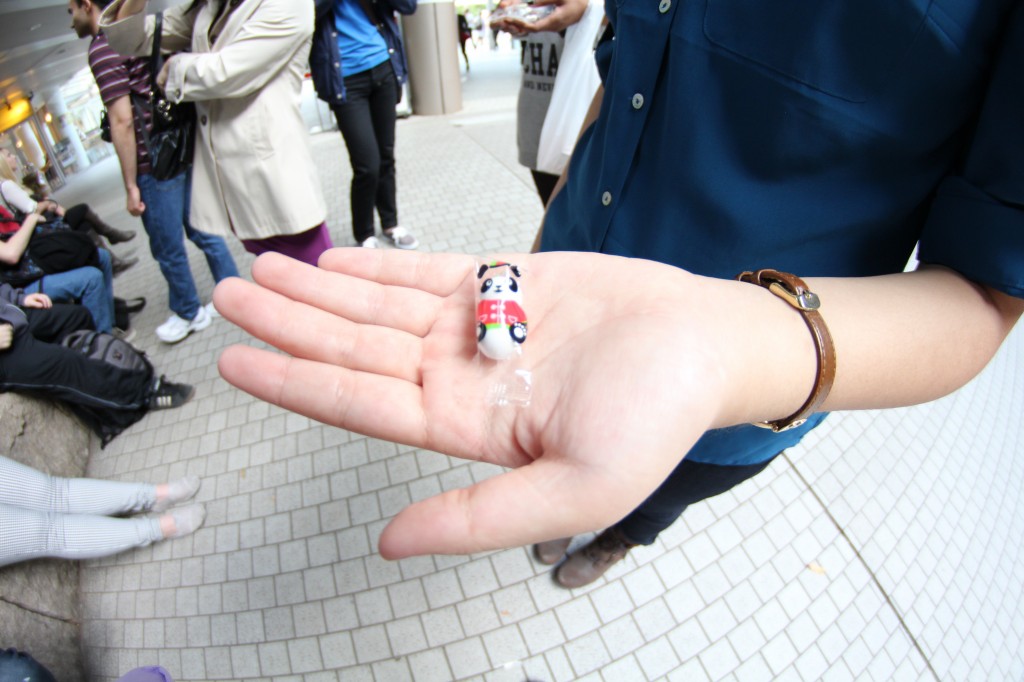 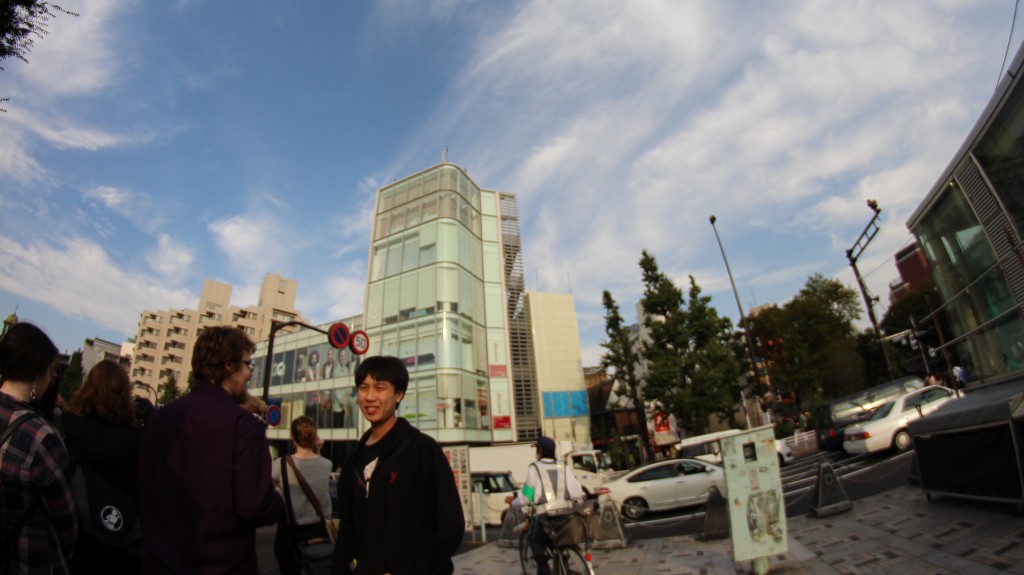 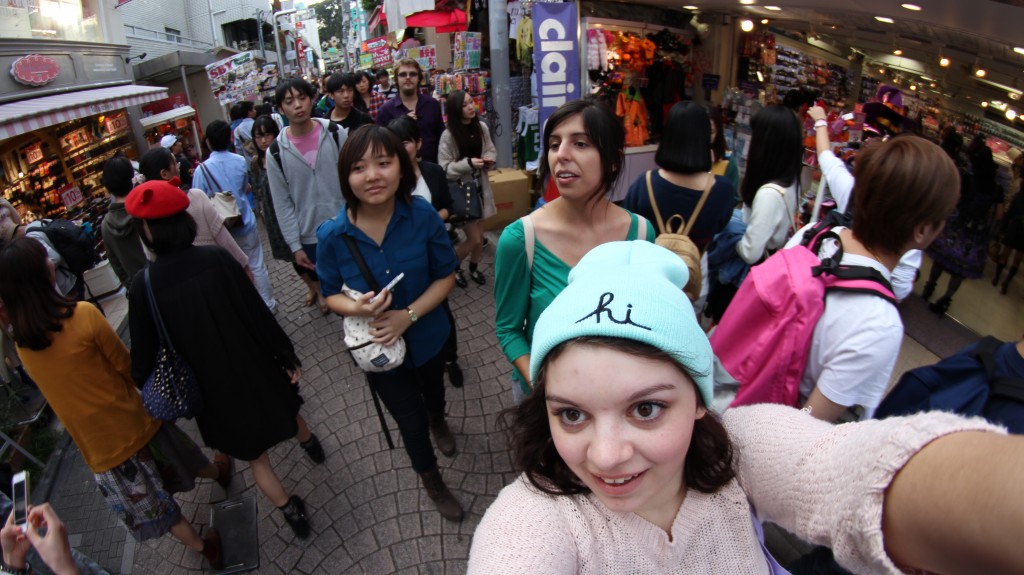 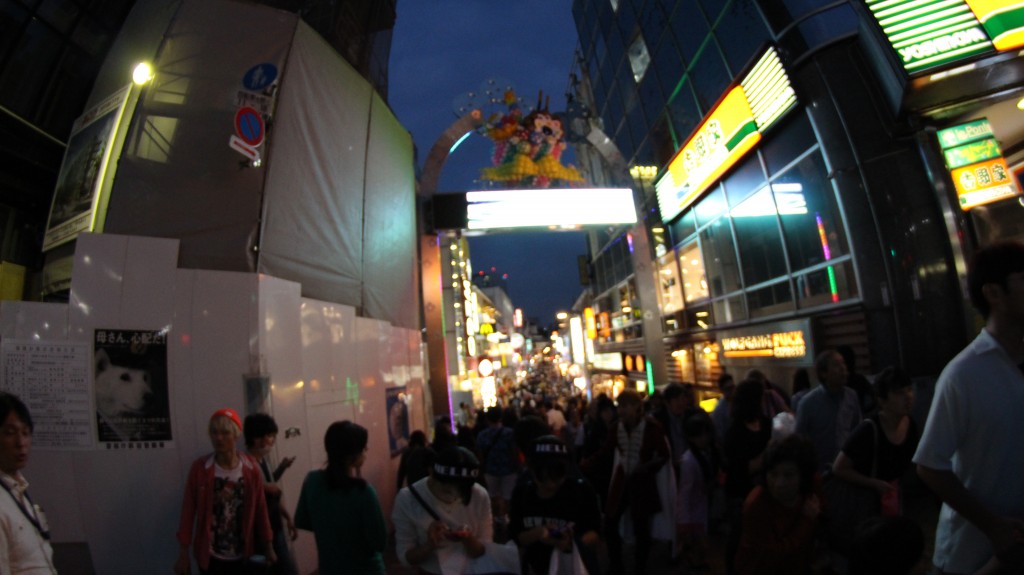 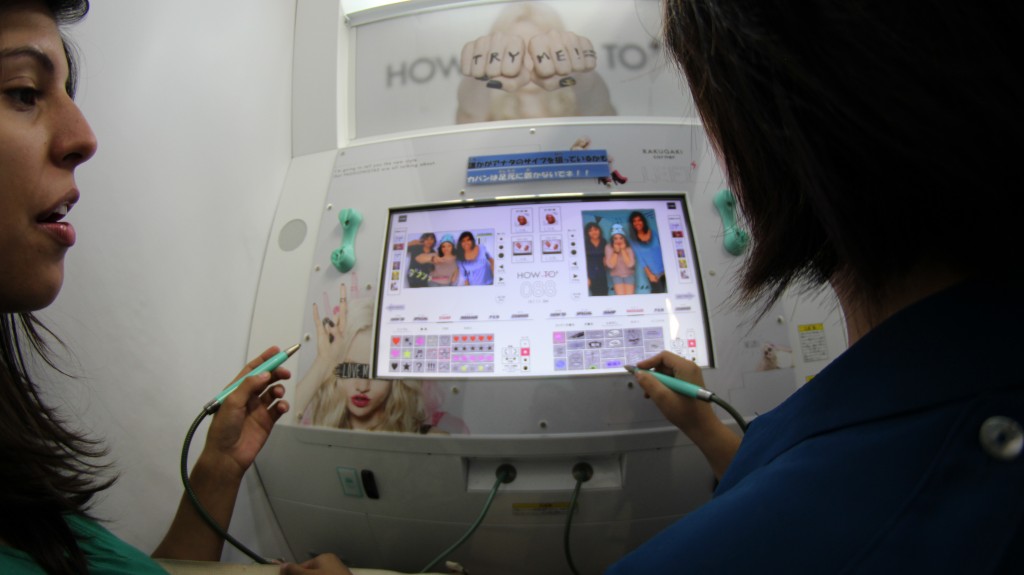 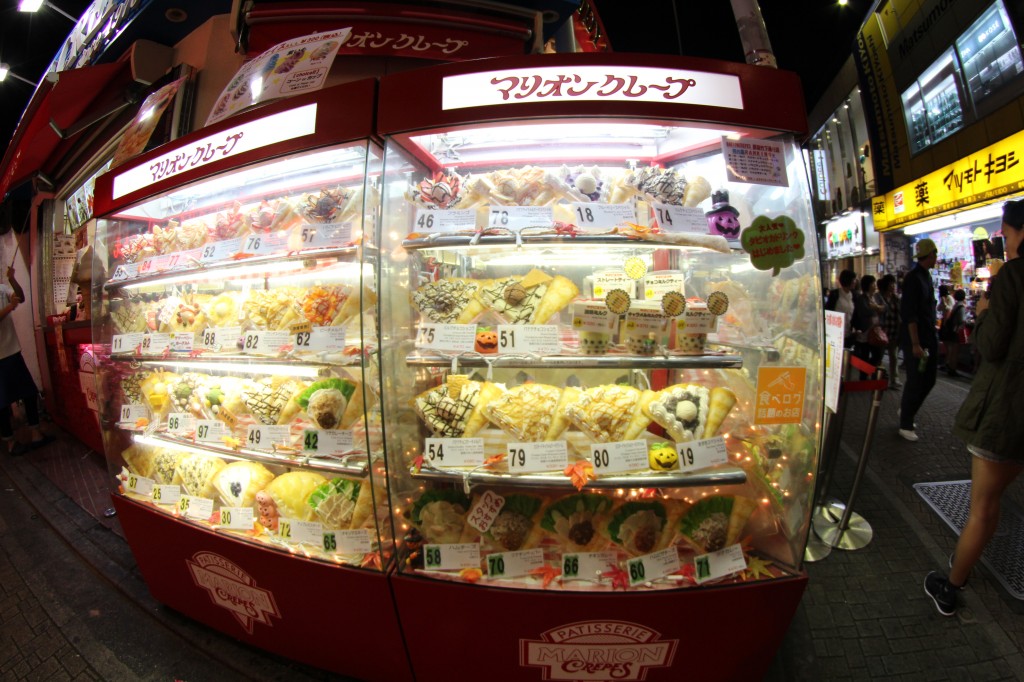 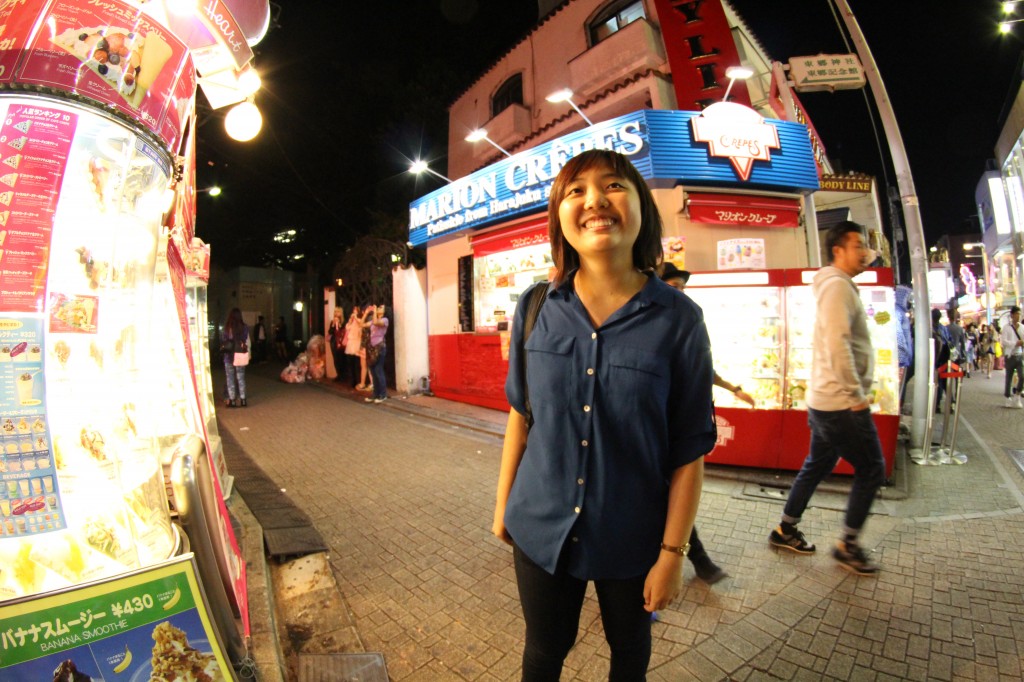 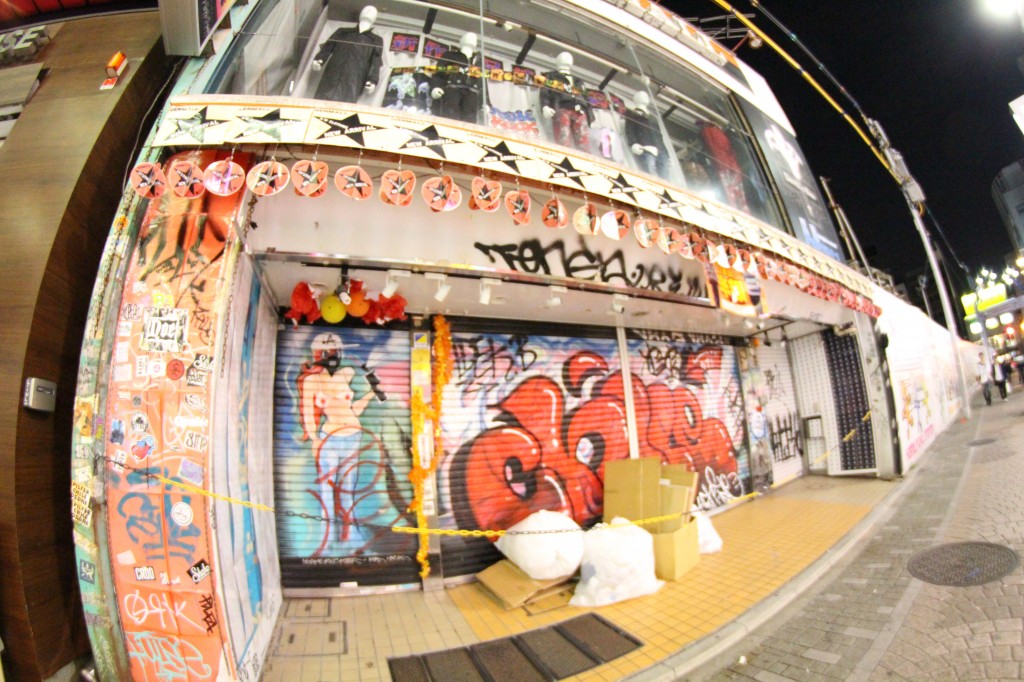 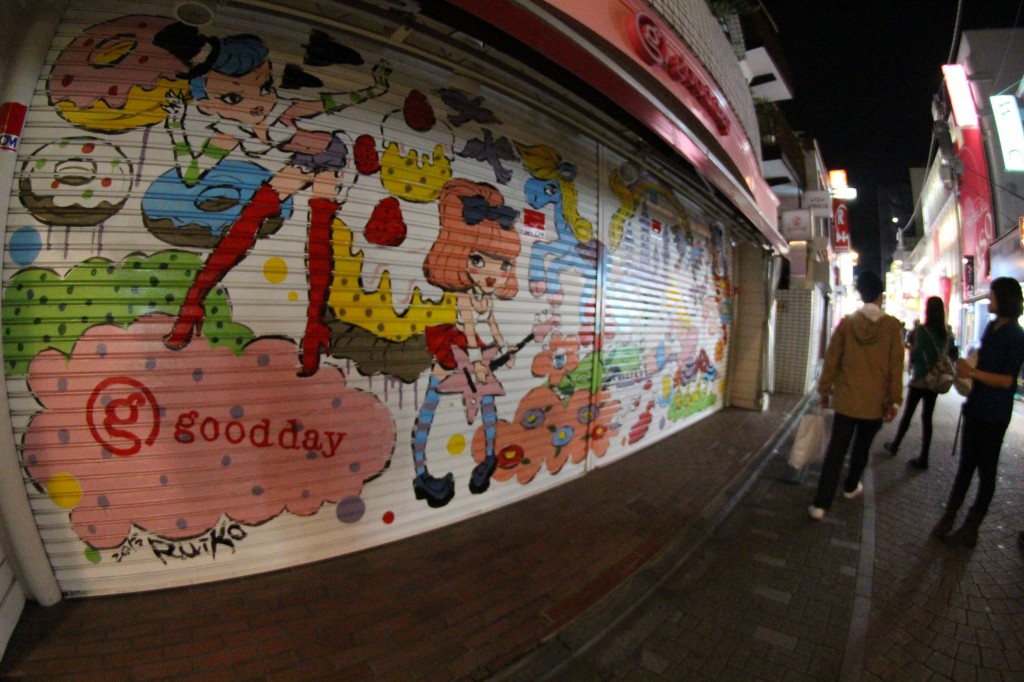 We went to Meiji Jingu Shrine. It’s one thing to study this in your classroom in America and see photos. Its a totally different thing to actually be there. We stepped off the train and walked to Harajuku. The Shrine is just a short walk from there. Everyone had their cameras out before we even saw it.

This shrine is a peaceful oasis in the midst of a booming, modern fashion district. While at the shrine, the dull roar of the city melted away as we walked on the long gravely path to the shrine’s entrance. I remembered what I had studied in America, how this shrine houses the largest wooden Torii gate in Japan. Seeing it in person was outstanding. It was so beautiful. We all walked to the left, bowed, and then began our walk to the shrine. I’ll let the video do most of the talking here, as I can’t even describe how beautiful it was. Keep an eye out for things you’ll learn in Dr. Berkwitz’s Chinese and Japanese Religion class. I was able to appreciate the shrine more because of what I learned in his class.

Remember that album in the 90’s from Gwen Stephani? “Harajuku girls you’ve got some wicked style….”. I was just a wee lass when that had come out, but ever since then, I’ve been curious as to what she was talking about. Saturday October 11, 2014 I found out. Our school took a culture class trip to Harajuku and Takeshita Dori street (sounds like kindergarten, but we are all 19-30 ish). I nearly cried when I saw it. You see photos of it in magazines, and videos of the endless outfits and fashion, seeing it in person however is an entirely different story. I don’t think I put my camera away the entire time we were there. I’m such a girl.

The whole street was colored with the rainbow, and peppered with girls and guys dressed in clothes that expressed themselves. I felt like, in a country that prides itself in how conservative it is, and how orderly and clean things are, this area is an oasis for young people searching for their voice. Imagine a mall that’s outside in your home country. For me, in America, we have closed malls for the most part. Big buildings, with lots of shops and kiosks. Takeshita Dori has open shops, shop girls yelling about their latest clothes, and discounts, and food. Head inside a small door, you could find yourself in a big shop. Head into a basement full of purikura machines, and you’ll find young couples, girlfriends, sometimes boyfriends cramming themselves into purikura booths to make memories. And you’ll most definitely always see somebody dressed in a way you want to dress.

Before we went to Harajuku, I told my new friends that even if I didn’t have money and we didn’t do anything else, we HAD to do purikura together. Its a rite of passage! I feel like no friendship is real until you take photobooth photos together! 2 of the 3 girls had never done it before, one of those three being me. So we paid our 400 yen, took some goofy photos, and then drew silly photos and put stickers on them. We all got copies, and I felt so happy I could cry. When you work really hard for something, and your dream finally comes true, it’s very overwhelming.

I hope you feel the happy energy from my video, and it makes you smile! I want everyone to have this experience sometime in their lives.