The famous Molière comedy “Tartuffe” premieres tonight in Craig Hall’s Coger Theatre, promising an evening of laughs and excellent performances, but the costumes will be reason enough to attend.

Starting before winter break, the costume shop has worked tirelessly to create unique and interesting costumes and wigs for the play. Costume shop manager Katie McMahon describes how her team created the looks seen on stage.

What costumes can we expect to see?
The costumes for this production are stylized versions of period clothes. I did a lot of research into what people would have worn in the 1670’s and then tweaked what I found to make it appropriate for our version of “Tartuffe.” There are a lot of bright colors and exaggerated silhouettes.

Wigs
The wigs for this production are made out of paper — a nod to the wigs that would be seen in a museum exhibit. Our director wanted the audience to feel like they had stumbled upon an exhibit of 17th century life in a gallery, rather than feel like they were watching a realistic day in someone’s life. We are playing around a lot with what is real and what is a facade. These wigs also allowed me to coordinate hair color with the costume. 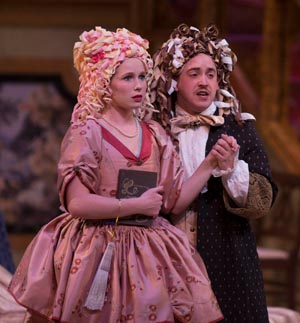 What went into making these costumes?
The process for making costumes for a large period show is a long one! I started working on designing and building costumes for “Tartuffe” before winter break.

Design
After I got a handle on what people were wearing, I took the director’s concept statement into consideration and started to create rough designs for each character — age, personality traits, relationships to other characters. I take my rough drafts to a production meeting and make sure that the director and other designers feel like my designs are in sync with what the entire production is trying to achieve.

After I have the go-ahead from everyone, I start working on final designs. I shop for fabric, get actor’s measurements and start patterning the garments. I work with so many wonderful people who help out with this stage of the process.

Patterning
Once we have patterns, we fit the actors into an early version of their garment, made out of cheap fabric. We use this mock-up fitting to perfect our fit and to create a new pattern. From here, we start working in the real fabric and create the garments you will see on stage.

Final alterations
Because this is a period show, we simply don’t have costumes in stock to use. About 90 percent of what you will see on stage is made by our costume shop in the last couple months. What we don’t make, we buy or pull from stock and alter to make it period-appropriate. After we have the real garment finished, the actors come back into the shop for another fitting, where we do any final alterations.

It is a long process, but is so different for every production. We are never working on the same thing for more than a couple months!

Directed by associate professor Sara Brummel, the comedy follows Tartuffe, a charlatan with false piety and ulterior motives. His manipulation of Orgon and his mother Madame Pernelle underlined the bourgeois values and religious hypocrisy of the 17th Century. The play’s premiere in 1664 drew ire from King Louis XIV and the Archbishop of Paris, but Molière defended his work, noting that the juxtaposition of opposites — good and bad, right and wrong, wisdom and folly, truth and falsehood, the rational and the unreasonable — is at the comedy’s heart.