Our students here in the Theatre and Dance department are always working hard and challenging themselves to be their best. To take a look at some of our students and their journeys here at Missouri State, we’re starting a new Student Spotlight series. We’ll be featuring students across all programs in the T&D department, and our very first Student Spotlight shines on Kestrel Jurkiwicz-Miles, a sophomore BFA Design and Tech Theatre major whose focus is in Costume Design.

Kestrel has always loved costumes, and they have been an integral part of his love for theatre. His designs have already been featured in two mainstage productions at Missouri State- Amélie and bare– in which, he explains how deeply seated in research and planning his designs are. For example, he gives insight to the process and inspiration that gave life to his costumes in bare:

“I was struck by the focus on religion and religious iconography, from the saints in the opening number to all the references to the Bible. From that, my visual concept became looking at a lot of portraits, mostly paintings or stained glass windows, from which I selected my color palettes and chose certain figures to represent the characters. Many baroque portaits of St. Celilia, for which their school is named, show her in red and yellow with blue accents, so that became the color palette for the school uniforms. Likewise, after reading the script, I saw that both Sr. Chantelle and Claire serve as mother figures in the story, and so I would base both off of the Virgin Mary! In fact, those characters’ outfits are almost direct color inverses of each other, which some people might notice.” 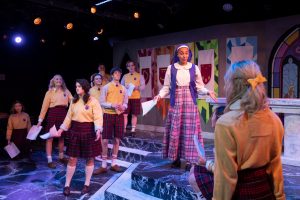 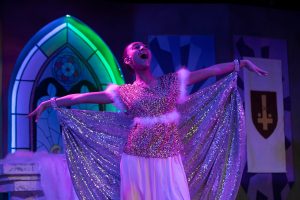 While he loves being the costume designer for bare, he concedes that working on Amélie may be his favorite show he’s been involved with thus far, explaining, “I think in the long run, assistant costume designing Amélie left a big impact on me- after all, it’s not often you get the chance to make a giant goldfish costume!” In addition, he has shows that he would love to see in his future. He reveals the shows he would love to work on someday are Chicago or Spring Awakening and explains, “I love those shows and have clear ideas as to what I would want to do.” While he’s not entirely sure what the immediate future might bring, he is interested in the possibility of pursuing costume design in grad school after he finishes his degree here at Missouri State. 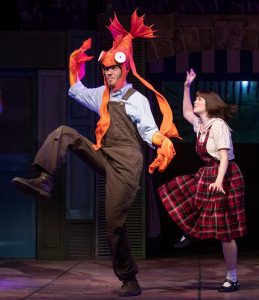 In addition to all the wonderful work he’s done within the department, Kestrel is also the secretary of the student-run production company on campus, Tabula Rasa, as well as the president of Scholars House Hall Council. But Kestrel says his favorite part of being here at Missouri State is “all the awesome people (he’s) met!” MSU’s Theatre and Dance department has some of the best and brightest students on campus, and Kestrel definitely agrees: “The design and tech program is full of creative minds and I love being surrounded by them!!” We can’t wait to see what else Kestrel does in his time at Missouri State, and we’re sure that it’s going to be great. 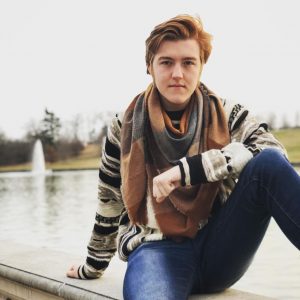