Welcome back to our Student Spotlight here on the blog! This week, we’re featuring Abigail Jensen, a B.A. Theatre/English double major that’s been paving her way here in the department. Abigail was already involved with UCYA last year when she starred as the titular role in Still Life with Iris. This year, she’s taking student work into her own hands as she collaborates again with UCYA and Tabula Rasa to produce an original play. Abigail explains the plot of the show and what inspired her to put pen to paper: “It focuses on a group of best friends, particularly Natalie, a college student who falls in love and discovers a new part of herself. I wanted to tell a pretty down to earth story based in reality but with elements of classic romantic stories, like in film and even opera! I wanted to let these sweet, romantic tropes be told without the past problematic implications and in a fresh way!” Student work has been an important part of Abigail’s collegiate experience, even stating that it’s been her favorite experience so far here at Missouri State. She explains, “I love doing student work because it’s a super collaborative way to apply what we study! Also, I love forming and being a part of little communities!” This has made her collaboration with student organizations a stepping stone as she tries to navigate her plans for her future career.

“I love doing student work because it’s a super collaborative way to apply what we study! I love forming and being a part of little communities!”

Having a double major in Theatre and English is not something you hear everyday and especially not an easy task to take on. Discussing what encouraged her to pursue these paths, Abigail describes her journey in both theatre and writing saying, “The first profession I ever wanted to be… was a writer. I would write scripts and make my friends perform them with me at recess and the same thing with my cousins at Thanksgiving. Since then, I began to become invested in acting and almost abandoned writing because I did not think I was good enough at it.” She expresses how her path has evolved since being at Missouri State and how that path became clearer the more immersed in classes she became: “I started college in theatre with intentions to add a second major, but I was not sure about English until I was in a poetry class, and I rediscovered my passion for creative writing! Now, I’m excited to study the two disciplines I love most!” It’s easy to see that we’ve only seen the beginning of what Abigail Jensen can do here in our department.

As someone still so early in their college career, Abigail is a natural exemplification for those who want to see their own work produced. For anyone who’s interested in writing for the stage but aren’t sure where to start, Abigail has this simple advice for you: “It does not have to be anything profound; mine isn’t! Just write what you want!”

Be sure to see Abigail Jensen’s production of My Sunshine on November 16th and 17th. Stay up-to-date on times and location for My Sunshine and the other shows part of UCYA and Tabula Rasa’s Backlit Season through their Facebook pages. We can’t wait to see what else is in store for Abigail during her time at Missouri State. 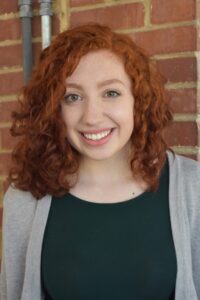