This weekend is UCYA and Tabula Rasa’s second show of their Fall Backlit Season, Constellations! The play follows Roland, a beekeeper, and Marianne, a cosmologist through their romantic relationship. Their story is told through different universes and different possibilities for their relationship. The director, Shane Everett, and the two co-stars, Simon Osler and Kathy Busch, have been hard at work tackling this complex show.

Shane Everett fell in love with the script for Constellations from the first time he read it, and that first reading immediately inspired him to get it produced here at Missouri State. He explains, “I first picked up the play this past summer as part of a couple other plays I had planned to read over the summer. I had planned to read Constellations over a week during that time. Then, I read it in one night. The entire story and the originality of how the play goes about telling that story was just so breathtaking. I just knew from the moment I finished the play that I wanted to see it staged, and I wanted to direct the play.” The show consists of different universes that affect Marianne and Roland’s lives from their first meeting to their first date and more life changing moments. Shane shares that his favorite universe for our couple: “I really enjoy the last two as it really reiterates what these characters have been through and poses the question to the audience about whether or not the relationship between these two is worth it or not.” These questions are posed through Simon Osler and Kathy Busch’s portrayals of their characters in the play.

Simon Osler plays Roland in Constellations, a beekeeper living in London. Simon describes Roland as “a kind soul but can be a bit oblivious sometimes,” and says he loves that “Roland is truly a kind person who tries his hardest to be the best he can, even through the difficulties the characters face.” As mentioned, the script is very complex and can be a challenge as an actor. Simon describes one of his challenges as the gravity of the show itself: “It’s a very heavy and difficult show, so getting to a place in our rehearsals where I thought I was doing justice to the text was a personal challenge, but I’m definitely very proud of how far we have come.”

Kathy Busch plays Marianne in Constellations, who conducts research at Cambridge University in theoretical early universe cosmology. Kathy describes Marianne as “scary intelligent, so when a tragedy later in the show renders her unable to speak fluently, it’s the worst possible challenge for her.” Much of the structure revolves around Marianne’s work, and Kathy explains her theories on the universe: “Basically, her work focuses on the idea of a multiverse, where various parallels futures coexist, and the decisions we make determine which future we end up having.” Some challenges that she faced during the rehearsal process revolved around those universes that are depicted throughout Constellations: “So, because the show focuses on the idea of a multiverse, there are some elements that repeat themselves with slight variations. So, as simple as it sounds, keeping the scenes straight can be really difficult!” Despite the challenges, Kathy has been very excited to share this story with the community.

The process has been great for all involved, and they expressed their favorite aspects of working on the show. Simon shares, “My favorite part of the process has been getting to know not only my co-star better, but also fully creating and having the freedom to make this character who I think he is, thanks to our wonderful director.” Kathy similarly has enjoyed being able to express herself more as a performer and challenge herself in new ways: “I actually use sign language in one scene, and I do the entire show in a dialect. I had no prior experience with either of these skills, so it was so much fun to learn!” Constellations is a beautiful show, and director Shane Everett hopes that the audience is able to experience the impact the two characters have had on each other’s lives. He says, “Though it may end in tragedy, the experiences and relationships that are forged through out our lives are worthwhile and important in defining who we are.”

Constellations runs this Saturday and Sunday at 7:30 at Q Enoteca. Be sure to check out this powerful piece of theatre and support student work! 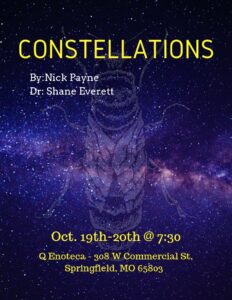 “We have all the time we’ve always had. You’ll still have all our time.”