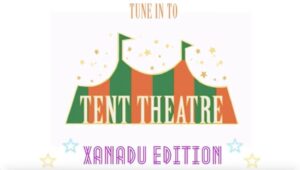 The ‘Tune In To Tent Part 1: Xanadu Edition’ of our special, virtual, three-part video series of summer 2020 has officially been released! The video series is in accommodation for the three productions of Tent Theatre’s 58th season that have been postponed, but will be popping up under the tent in summer 2021. Each features inspiring words from Tent Theatre Producer Joe Price and Artistic Director Sarah Wiggin, behind-the-scenes looks from production members like Xanadu Choreographer Sarah Wilcoxon, musical sneak-peeks from cast members, and special guest stars like M.S.U. alumni and member of Broadway’s original Xanadu cast Kyle Dean Massey. All of it is brought together and hosted by Tent Company Member Emma Keifer.

This week’s edition opened with hopeful and reassuring messages from Tent Theatre Producer Joe Price, featured to the right, and the Artistic Director Sarah Wiggin. Joe Price started by expressing his wishes to see all the incredible patrons and sponsors under the tent, but is excited to give everyone “a little taste” of the magic that comes from each production. He also thanked our generous sponsors KTXR, Meyer Communication Ethel Curbow, AMAX Realty, Brad and Carmen Stokes. Sarah Wiggin welcomed everyone to the 58th season and happily announced all to come in the special programming, including the teasers for the next season. She also, of course, gave her renowned curtain speech reminding audiences to “turn off all electronic devices, except the one you’re watching on,” and that “recording of any kind is prohibited.”

The host of Tent Theatre’s video-series Emma Keifer came on and introduced the first teaser, and her favorite song from Xanadu, “Evil Woman” by Electric Light Orchestra. It featured Tent Company Members Jenna Leavitt and Jodi Synder as Muses Calliope and Melpomene, respectively. They truly rocked their 70’s-style performance with high scrunchies, jean jackets, and fun, funky energy! They were followed by kind words from a variety of company members over what they’re looking forward to in Tent Theatre’s next season.

The next teaser introduced by Host Emma Keifer was “Suddenly” by John Farrar featuring Tent Company Members Aline O’Neill and Zach Greer as Kira and Sonny, respectively. A captured moment from this timeless and romantic duet can be see on the side as Sonny longingly looks towards his partner Kira. Aline and Zach did such a spectacular performance with such a pure and warm feeling. They were followed with production company members Costume Designer Samantha Morrow, Choreographer Sarah Wilcoxon, and Scenic Designer Michelle Harvey explaining the great time they each had designing their production aspects, overcoming scripted challenges, and what each used as inspiration for this classical and disco-themed show.

The ‘Tune In To Tent Part 1: Xanadu Edition’ was also joined by the special guest star Kyle Dean Massey! Kyle is an alumni from Missouri State University’s Theatre and Dance Department as a graduate from the B.F.A. Musical Theatre program and has several Broadway credits including his debut in the original opening of Xanadu. He recounted his experiences in the unique and lengthy audition process as well as his wonderful and hilarious time as the Muse of Comedy who ironically danced more than the Muse of Dance! He also told about one of his favorite experiences of quoting a scene with actor Whoopi Goldberg from the 1992 Sister Act accidentally directly in front of her at the Tony Awards. He closed with a short performance of his original Xanadu audition song “Let’s Hear it For the Boy” by Deniece Williams.

All of this and more is still available to see here https://www.youtube.com/watch?v=2v5PDOxb2LI&feature=youtu.be&fbclid=IwAR2nyP0qndPWa19eQa0eexNOZOkT1JKW3Q01nsfVhcyALLw-O5NbNqtkGWk or through the link available on the Tent Theatre Facebook Page. Tune back in July 16th and 23rd at 7:30pm for the release of parts 2 and 3 of ‘Tune In To Tent’ the Moon Over Buffalo and The Producers editions.