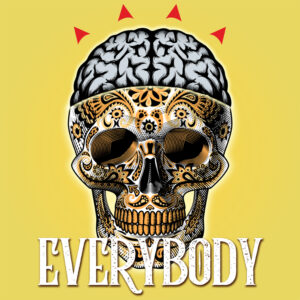 DIRECTED BY
KYLE A. THOMAS

I. Here Beginneth A Treatise On How Someone Or Something- God?- Sendeth Death To Summon Every Creature To Come And Account For Their Lives In The World, Presented In The Manner Of A Morality Play
II. The Summoning
III. “And That’s When I Woke Up…”
IV. A Chorus
V. Friendship
VI. “This Is A Dream?”
VII. A Chorus
VIII. Family
IX. “I’m Sorry I Just Have To Say Something”
X. A Chorus
XI. Stuff
XII. “You Know What? Fuck You!”
XIII. La Danse Macabre
XIV. The Journey
There will be no intermission.

Sooner or later, Death comes for everybody. In this contemporary reimagining of the 15th century morality play “The Summoning of Everyman,” the symbolic Everybody — a representative of all humankind — must give an accounting of their life to The Almighty before they can journey to the great beyond. In defending their life, Everybody calls upon personified concepts such as Friendship, Kinship, Stuff, Mind, Senses, Beauty, Strength, Evil, and Love. In a unique twist, roles are assigned to the cast by means of a random lottery at each performance, so the actors must memorize the entire script and be prepared to play any role. Prepare to ponder the meaning of existence as Everybody provides a fresh and witty perspective on life’s greatest mystery!

Everybody by Branden Jacobs-Jenkins is a modern adaptation of the 15th-century morality play Everyman. This performance allows each person to interpret death and the allegorical characters from every individual’s experiences. This play begins with “God” tasking Death to find someone who will be able to recount the way that they have lived their life. Death searches the audience for several Somebodies and selects one to take on the role of Everybody who will be taken by Death. Everybody, fearing the unknown of the afterlife and not having a proper way to recount their life experiences, begs Death to have someone to join them on this journey. Death agrees to this if Everybody can find someone willing to go along. Everybody meets the personifications of Friendship, Kinship, Cousin, and Stuff and asks them to die with them so that they can recount Everybody’s life accomplishments. They decide that they fear death more than their own loyalty to Everybody and leave them to die alone. It is only when Everybody meets Love that they can accept the unknown and fulfill Death’s wishes.

WHO’S WHO IN THE COMPANY

Kennedy Brown (Death) St. Louis, MO. Kennedy is a junior BFA Acting major. She was most recently seen in the Missouri State University productions of Argonautika as Idmon and Andromeda, Ghostly Trinkets as Female Ghost, and Mostellaria as Philematium. Kennedy also has credits with STAGES STL Academy as New Wave Girl in the production of Heathers: High School Edition and Catherine in the production of Pippin. At Parkway West Dramatics, she was seen as Marcy Park in the production of The 25th Annual Putnam County Spelling Bee.

Alyssa Gaul (Somebody) Shawnee, KS. Alyssa is a junior BFA Acting major. Her credits with Missouri State University include Luciana in The Comedy of Errors, Phineus/Amycus in Argonautika, and Simo in Mostellaria. Alyssa’s credits with Evangel University Films includes Afterburn and Inheritance.

Hailey Hance (Somebody) Waynesville, MO. Hailey is a senior BS Theatre Studies major. She has credits with Missouri State University as Aphrodite in Argonautika, Starla Flefferton in The Clinic, Mom/Miss Overlook in Still Life With Iris, Mum in Parliament Square, and Monkey in The Jungle Book. Hailey also has credits with Springfield Contemporary Theatre as Singer in SCT Sings: B’way Rock. With Theatre on the Square, she was seen as Louise in Fox on the Fairway, and Maggie in Gifted. Hailey is a recipient of the Theatre Regents and In-School Players Scholarships through Missouri State, and the Albie Frizzle Memorial Scholarship through Pulaski Fine Arts Association.

Steven Horn (Somebody) Kansas City, MO. Steven is a senior BFA Acting major. At Missouri State University, he was seen as Leonard Grossman in These Shining Lives, Fabian in Twelfth Night, and Assistant Director for Cats. With Tabula Rasa, Steven was seen as Pastor Greg in Hand to God. He also has credits as Director of Dog Sees God with Grab the World, and Assistant Director of Seminar with Eyes Up Productions. Steven is a recipient of the Mike McElhaney Shakespeare Award through Missouri State, and the UMB Scholarship through UMB.

Callandra Hudak (Somebody) St. Louis, MO. Callandra is a senior BFA Acting major. She has credits with Missouri State University as Dryope in Argonautika and Irma Kronkite in Picnic. Beyond Missouri State, Callandra was seen as Video Girl in the band Citizen’s Music Video for Blue Sunday produced by Locke and Stache, Amy Remmie in Castleway Road and Lilith in Misbehavior both with the MSU Film Department. She is a recipient of the Theatre Regents Scholarship through Missouri State.

Abigail Jensen (Girl) St. Louis, MO. Abigail is a junior Theatre major and Creative Writing major. Her previous credits with Missouri State University include Phaniscus in Mostellaria, Lucretia Borgia in Because I Am Your Queen, and Ensemble in Degas, C’est Moi. Abigail also has credits with Tabula Rasa as Playwright/Director for My Sunshine, with the University Coalition of Young Artists as Iris in Still Life with Iris, and with MSU Electronic Arts as Brooklyn in Ridgeport Ruins. She is a recipient of the Board of Governors and Theatre Regents Scholarships as well as the Joseph & Helen Martino Trust Scholarship.

Elijah Nash (Somebody) Kansas City, MO. Elijah is a freshman BFA Musical Theatre major. Has was seen with Inspired Purpose as Joseph Pulitzer in Newsies and “Light of the World” Soloist in Godspell. Elijah was also seen with Liberty High School Theatre as Crooks in Of Mice and Men. He is a recipient of the A+ Scholarship through Missouri State University.

Josie Ramsdell (Love) Milford, NE. Josie is a sophomore BFA Acting major. She has credits with Missouri State University as James in My Sunshine and Jean in Miss Julie. Josie is a recipient of the Provost Scholarship through Missouri State.

Shayna Rives (U/S) Ringwood, NJ. Shayna is a sophomore BFA Musical Theatre major. At Missouri State University, she was seen as Ayah in The Secret Garden and Ensemble in Oklahoma! in Concert. At Lakeland Regional High School, Shayna played Meredith in Five Woman Wearing the Same Dress and Velma Kelly in Chicago: High School Edition. At Broadway Workshops, she was seen as Ensemble in Sister Act.

Dillon Savage (U/S) Fort Worth, TX. Dillon is a junior BFA Musical Theatre major. He was recently seen at Missouri State University as Dr. Pinch in The Comedy of Errors, Doody in Grease, and Alan in bare: A Pop Opera. Dillon has also performed with Springfield Little Theatre as Jamie Wellerstein in The Last Five Years, Springfield Contemporary Theatre as Soloist in Side by Side by Sondheim, and Spectra Theatre Co. as Melchior Gabor in Spring Awakening.

Liam Smith (God/Usher/Understanding) Plano, TX. Liam is a freshman BFA Musical Theatre major. He was recently seen as Robert in the production of Proof at Plano West Senior High.

Darby Vincent (U/S) Springfield, MO. Darby is a sophomore BFA Musical Theatre major. At Missouri State University, she was seen as a Universal Swing in The Secret Garden and Ensemble in Oklahoma! in Concert. Darby was also seen as Barrett in Fugitive Songs and Rosa Bud in The Mystery of Edwin Drood both with Springfield Contemporary Theatre, and Katherine Plumber in Newsies with Landers Theatre. She is a recipient of the Board of Governors Scholarship through Missouri State, and the Youthfest Talent Scholarship through Landers Theatre.

Jacob Curless (Dramaturg) Blue Springs, MO. Jacob is a BS Theatre major. He has credits with Missouri State University as Kip in Wonder of the World, Spot Operator in Heathers: The Musical, and Marketing Director for Tabula Rasa Student Productions.

Lauren Fahrner (Assistant Production Manager). Lauren is a senior BFA Design, Technology, and Stage Management major. Her previous credits with Missouri State University include Stage Manager for The Wolves, The Rimers of Eldritch, Picnic, and These Shining Lives. Lauren also served as Stage Manager for Tent Theatre’s production of The Mousetrap. She is a recipient of the Board of Governors Scholarship from Missouri State.

DeLaney Henley (Assistant Director) Springdale, AR. DeLaney is a senior BA Theatre major with a History minor. At Missouri State University, she was seen as Queen Mary of Scotts in Because I Am Your Queen, and Player 1 of 3 in Too Much Light Makes the Baby Go Blind.

Julia Makarsky (Assistant Stage Manager) St. Louis, MO. Julia is a junior BA Theatre major. Her credits with Tabula Rasa at Missouri State University include Carole Luftig in The Clinic, Stage Manager in Miss Julie, and is their official Social Media Coordinator. Julia is a recipient of the Board of Governors and Theatre Regents Scholarships through Missouri State.

Jeremiah Middleton (Sound) Parsons, KS. Jeremiah is a freshman BFA Design, Technology, and Stage Management major. His credits with LCHS include Sound Designer and Sounder Operator in Catch Me if You Can, Sound Designer and Master Electrician in Kodachrome, and Vice Principal Panch in Putnam County Spelling Bee. Jeremiah is a member of the Dean’s List through Missouri State University.

Cole Trumble (Properties) Grain Valley, MO. Cole is a senior BFA Design, Technology, and Stage Management major. His previous credits with Missouri State University include Props Master for The Secret Garden, Crimes of the Heart, and bare: A Pop Opera, and Scenic Designer for The Wolves. Cole also has credits with Utah Festival Opera and Musical Theatre as Assistant Props Master for The Marriage of Figaro, and Props Artisan for Mary Poppins and Bravo, Caruso!. He is a recipient of the Presidential Scholarship and received 5th place at the Vicki Stanton Public Speaking Showcase through Missouri State.

The photographing, sound or video recording of any performance or the possession of any device for such recording inside the theatre without written permission of the management is prohibited by law.

To request an accommodation due to a disability, please contact the Theatre and Dance Department at least one week in advance.

For the courtesy of all audience members and performers, cellular phones must be silenced during the show. Please be mindful that inadvertent noise and excessive movement can be disruptive to the theatrical experience.

Accredited Institutional Member of the National Association of Schools of Theatre.