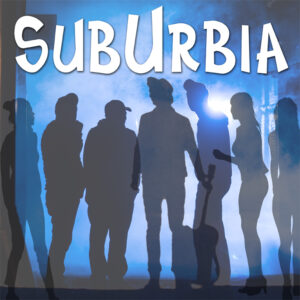 Scenes from SubUrbia: A classroom project.
Years after their high school graduation, a group of 20-something friends still gather nightly in the parking lot of a local gas station in their suburban hometown of Burnfield, New Jersey, to eat pizza, drink beer, and relive their high school glory days. Set in the 1990’s, SubUrbia captures the frustrations of a generation struggling to salvage the American dream.

WHO’S WHO IN THE COMPANY

Elizabeth Bunker (Erica) Plano, TX. Elizabeth is a freshman BFA Musical Theatre major. At Plano West Senior High School, she holds credits as Elle Woods in Legally Blonde, Suzanna in Becky Shaw, and Louise/Gypsy Rose Lee in Gypsy. Elizabeth is a recipient of the Board of Governors Scholarship through Missouri State University.

Cameron Eli DePriest (Tim) Marshfield, MO. Cameron is a senior BFA Musical Theatre major. His previous credits at Missouri State University include Hercules in Argonautika, and Dancer in the 2020 and 2021 Spring Dance Concerts. Cameron also has credits with Springfield Little Theatre as Chad in All Shook Up!, with Springfield Contemporary Theatre as Goat in The Robber Bridegroom, and with Marshfield Community Theatre as Director/Choreographer for Seussical.

Hanna Lee Eisenbath (U/S Sooze) St. Charles, MO. Hanna is a BFA Acting major. At Missouri State University, she was seen as Athena in Argonautika, and Emilia/Abbess in The Comedy of Errors. Hanna also has credits with Spectra Theatre Co. as Ensemble/Soloist in Head Over Heels, and with Tennessee Williams Theatre Festival as Hilda in The Night of the Iguana.

Hayden Hart (Buff) Fort Worth, TX. Hayden is a junior BFA Musical Theatre major. He was recently seen at Missouri State University as Archibald Craven in The Secret Garden, Curly in Oklahoma! in Concert, and Old Deuteronomy in Cats. Hayden was also seen with Casa Manana as Mr. Stevens in Carrie, and Sweeney Todd in Sweeney Todd.

McKenna Harvey (U/S Erica) Shawnee, KS. McKenna is a junior BFA Musical Theatre major. She has credits with several productions at Missouri State University, including The Secret Garden as Mrs. Medlock, Oklahoma! in Concert as Vivian, Cats as a Swing, and Sightlines: Spring Dance Concert as Dancer. McKenna also has credits with the productions of Into the Woods as Cinderella, and Beauty and the Beast as Silly Girl with Summit Theatre Group. With Christian Youth Theatre, she was seen as Fiona in Shrek The Musical. McKenna won 1st Place Musical Theatre Treble through Ozark NATS, and 2nd Place Musical Theatre Treble through Central NATS.

Seth Hughes (Jeff) Overland Park, KS. Seth is a junior BFA Acting major. His recent credits with Missouri State University include Barnette Lloyd in Crimes of the Heart, and Alan in Picnic. Seth also has credits with Pencil Shavings Productions as Dr. Chasuble in The Importance of Being Earnest. He is a recipient of the Kathleen Turner Award through Missouri State.

Wyatt Lysenko (Pony) New Canaan, CT. Wyatt is a sophomore BFA Musical Theatre major. He was recently seen as Lieutenant Wright in the Missouri State University production of The Secret Garden. At New Canaan High School, Wyatt appeared as Emmett Forrest in Legally Blonde, Billy Crocker in Anything Goes, and Harry Haubenstock in Letters to Sala.

Skye Palmer (Bee Bee) San Antonio, TX. Skye is a junior BFA Musical Theatre major. Her Missouri State credits include ensemble in bare: A Pop Opera and Oklahoma! World Premiere in Concert. Skye is working on the production of her debut EP, Saved by Venus. She was a 2nd place finalist for the Las Casas foundation in San Antonio, TX. Her previous theatre credits also include the Mistress in Evita and Hunyak in Chicago.

Lisa Sandoli (Sooze) Fair Haven, NJ. Lisa is a sophomore BFA Musical Theatre major. She holds credits with Missouri State University as Swing in the 2020 Fall Dance Concert and Ensemble in Oklahoma! World Premiere in concert. Lisa also has credits with Rumson Fair Haven Regional High School as Morticia in The Addams Family and Lily in The Secret Garden. She is the 2020 Second Place Regionals winner for the National Association of Teachers of Singing, and is the winner of Best Featured Actress in a Musical at the Bucks County Competition for her role in The Secret Garden.

Adam DeBacker (Assistant Properties Master) Springfield, MO. Adam is a junior BS Theatre major with an emphasis in Design, Technology, and Stage Management. He recently worked Light Crew in Picnic, and Set Construction in Cats and The Comedy of Errors at Missouri State University. Adam was also Follow Spot in Springfield Little Theatre’s 2020 season along with working Light Board for their production of All Shook Up and Madagascar. He also has credits as Deck Crew in the SLT productions of Frozen and The 39 Steps. He is a recipient of the Theatre Regents and Academic Transfer Scholarships through Missouri State, and the Brandon Gruber Scholarship for the Arts through National Down Syndrome Society.

Lauren Fahrner (Assistant Production Manager). Lauren is a senior BFA Design, Technology, and Stage Management major. Her previous credits from Missouri State University include Stage Manager for The Wolves, The Rimers of Eldritch, Picnic, and These Shining Lives. Lauren also served as Stage Manager for Tent Theatre’s production of The Mousetrap. She is a recipient of the Board of Governors Scholarship through Missouri State.

Zoe Rico-Beaubien (Scenic Designer) Grapevine, TX. Zoe is a freshman BS Theatre major. With Chosen Productions, she has credits as Artistic Director of Legendary: A New Adventure, and Artistic Director/Producer of The Chosen Ones. With Grapevine High School, Zoe has credits as Student Director of Big Fish. She is a recipient of the Out-of-State Tuition Waiver through Missouri State University, Book Stipend through Bears L.E.A.D., and is a 12 Star Honor Thespian through International Thespian Society.

Accredited Institutional Member of the National Association of Schools of Theatre.