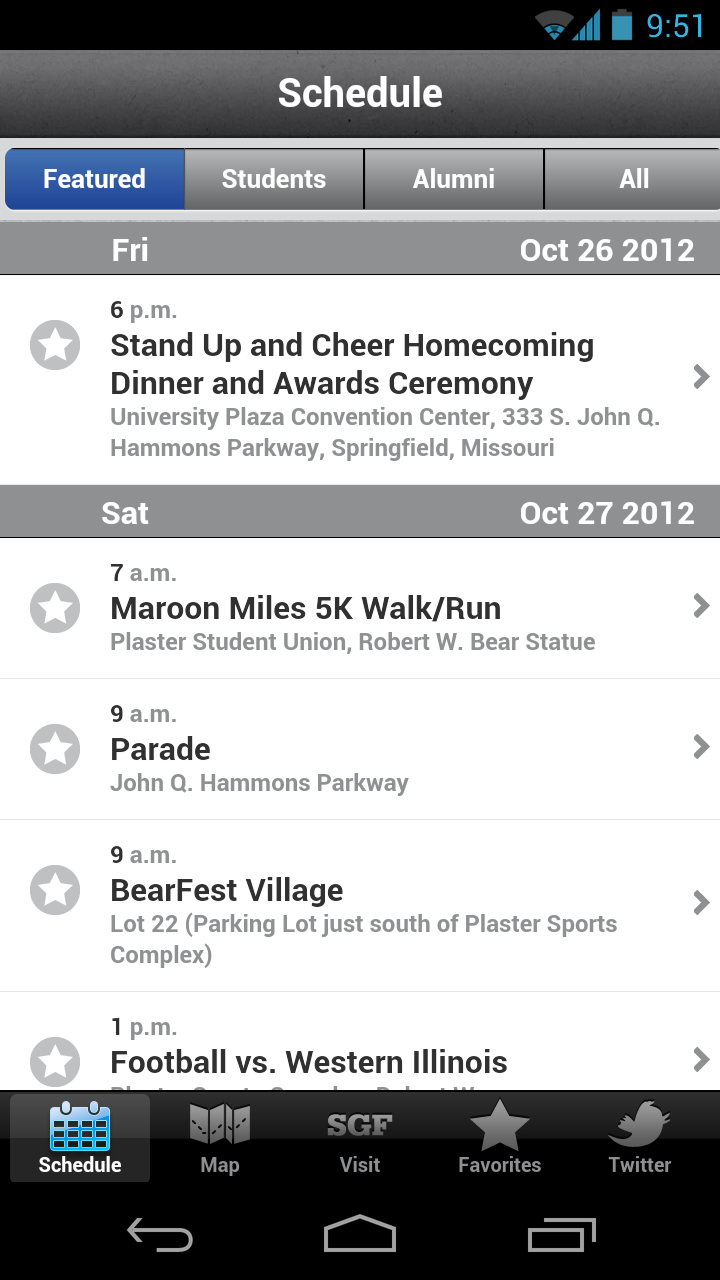 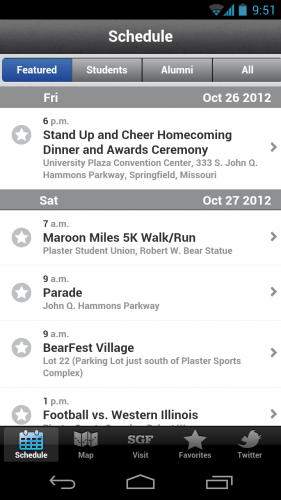 In support of homecoming 2012 activities, we developed a mobile application for iOS and Android devices. The application featured: 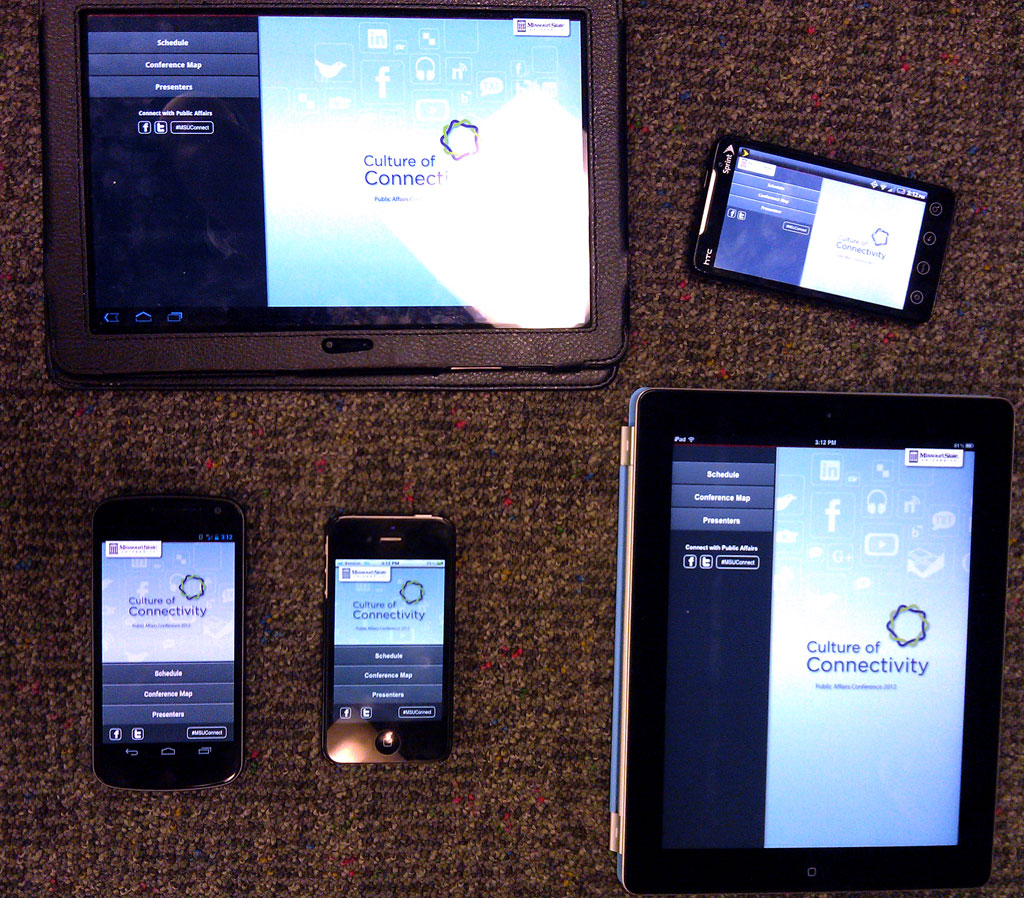 We made brief foray into the world of mobile applications a few years ago. Since then, we’ve been busy concentrating on upgrading our site design and infrastructure. However we have been wanting to return to producing mobile versions of high-level sites. Rather than tackle of of the big questions we have about our homepage, we decided to start on a much more limited scope: the 2012 Public Affairs Conference.

Conference apps provide a clear user experience and have a decidedly small set of tasks that everyone attending does in some fashion. After using several different apps while attending our own conferences, we were able to select the experience that was the best fit for our conference. And while the list of features wanted in the app was overwhelming, we decided to keep it simple and concentrate on the three main ones:

With the list of mobile devices and tablets growing by the day, we decided to stick with the original strategy and produce an HTML5 site with a native code wrapper. The good news is the situation has vastly improved for this technique.

I made heavy use of the Google Closure-tools (library, templates and the compiler). They are all designed to work well together and the dead code removal of the compiler allowed me to use many features of the library without increasing my final size with unused code.

The features of the app were discussed with our designer, Lindsay Thomack, as well as finding apps that did similar things. Lindsay then built the design taking into account different size devices as well as handling landscape vs. portrait view. I then implemented the app and posted it.

Today is my first day back on the job after a 4 1/2 month leave to hike the Continental Divide Trail. Crazy as this sounds, it is my third major trail to hike. I’ve always kept an online journal when hiking, but in the past I had to mail or email journal entries to someone else for posting. Pictures took even longer as I had to mail camera memory cards back and forth. Technology finally has gotten to the place where I was able to completely post and manage my blog and pictures while hiking.

First the solution had to be light. I’m an ultralight hiker so weight is a big deal. Maybe that’s an understatement; weight is almost everything. I’m concerned about fractions of an ounce. So the solution can’t be a satellite phone, laptop, tablet or anything that weighs more than a small paper notebook and pencil. That really makes it tough. Also, while I don’t post every day, I need to be able to post from towns without requiring a full computer hookup either.

I switched to using Word Press to power my blog. I developed a custom theme that lets me use geotagged posts to show my current location on a map. I created a category for each of my hikes and used a specific template for each category to customize which map displayed. The hardest part was going back to all my old posts and geotagging the location. That took a bit. With the location attached to a post, now followers can match up what I’m talking about to both a specific area of the country as well as my overall progress on the hike. Really cool.

I also wanted people to follow along on Facebook. While I might personally think Facebook is evil, I had to recognize that the rest of the world lives by it. I keep my Facebook profile pretty locked down so that wasn’t going to be very helpful. Instead I created a Facebook page as an athlete using my trail name. Perfect! Now people could like the page and I didn’t have to approve the request.

Text based blog entries are one thing, but how to manage the pictures? I already had a lot of my personal photos on Flickr, so naturally I wanted to keep my hike photos there as well. I simply created a set for each hike. For the blog home page, I used JQuery to pull in the latest photos from my Continental Divide Trail set as a rotating slideshow on the homepage.

I have carried a cell phone on all my hikes. So now my cell phone became multi-use gear and also was my journal entry device. Thankfully, smartphone keyboards and auto prediction have come a long way and the typing was tolerable. I use an Android phone which has a native Word Press application. Handily, the Word Press application for the phone will automatically geotag the post. All I had to do was put the post in the correct category.

Photos are a different matter. Most of the time the trail took me through the middle of nowhere (by design). Even in town I was lucky to have cell service, much less a 3g connection. However in every town I was able to find WiFi somewhere. That’s great because uploading a 2Mb photo over a slow data connection is just painful. There are several Flickr related applications for Android phones but the one I had the best luck with was Flickroid. The big hurdle became getting the pictures off of my camera onto my phone. Thankfully most Android phones use mini-SD cards for external storage and so does my camera. I simply rebooted my phone with the camera memory card installed and had access to all the photos.

In addition to Facebook, I used Foursquare to check in to the towns as I went. I would check in as soon as I arrived while my blog entries and photos usually had to wait until later in the day to get posted. I used the private RSS feeds for Foursquare to feed them into Facebook as a status update. My followers really like the quick status update just so they could see that I was making progress. I also fed both the blog entries and Foursquare into twitter so people could also follow along there.

The biggest downfall of all of the social media was that I had to monitor comments everywhere. You could comment on the blog itself, Facebook or Foursquare.