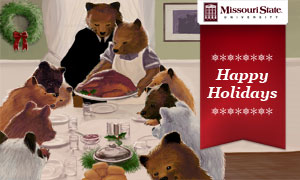 Congratulations to Kelly Johnson, student web designer from the office of Web and new media, who was selected as University Relations Student Employee of the Month.

Kelly was recognized for her outstanding illustrative work on three projects: 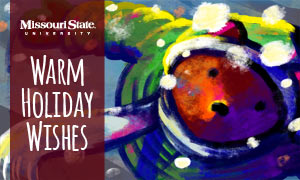 Kelly took time to thoughtfully research imagery and themes appropriate to the Missouri State brand and engaging to a wide audience that includes students, faculty, staff and alumni. On both occasions Kelly developed several concepts, one of which was selected by the President (with high accolades) for use as the primary illustration in his yearly holiday email to the University community. The artwork was further utilized on the homepage and across Missouri State’s social media channels over the holiday break.

The office of web and new media periodically uses pop-culture “holidays” to engage students on social media. Kelly aided in these efforts by developing a striking series of three images that combined recognizable imagery from Missouri State with that of the original Star Wars movie trilogy to celebrate May 4, 2012. The result was one of the highest liked and shared series of posts in the history of the Missouri State Facebook account.

Kelly worked in tandem with new media producer Brad Mitchell to design graphic elements and storyboard a commercial spot that utilized a script developed by University Communications to succinctly—and creatively—convey the public affairs mission to a broad television audience as well as those in attendance during the 2012–2013 basketball season.

Please help me congratulate Kelly on this much deserved recognition.

Congratulations to Kyle Falconer, Web Works student developer from the office of Web and new media, who was selected as University Relations Student Employee of the Month.

Kyle was recognized for his work in implementing two projects:

He not only worked diligently to implement the designs but helped finalize an internal framework which Web and new media can reuse for future mobile applications. Kyle also performed extensive testing to ensure the same experience across a wide variety of mobile devices and tablets.

Please help me congratulate Kyle on this much deserved recognition. 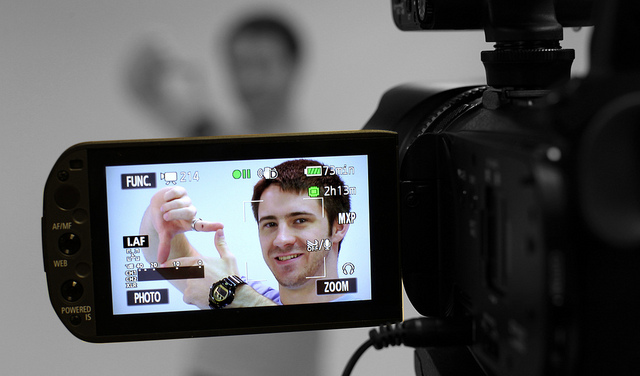 Congratulations to Tyler Beck, student videographer from the office of web and new media, who was selected as University Relations Student Employee of the Month for March/April, 2012.

Tyler was recognized for his work filming and editing two recent video projects:

Please help me congratulate Tyler on this much deserved recognition. 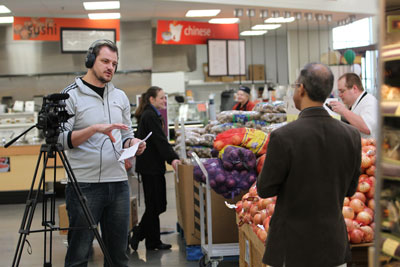 Congratulations to Adam Wagner, student videographer from the office of web and new media, who was selected as University Relations Student Employee of the Month for November, 2011.

Adam was recognized for his work for filming and editing two high-level video projects on a very tight deadline:

Please help me congratulate Adam on this much deserved recognition. 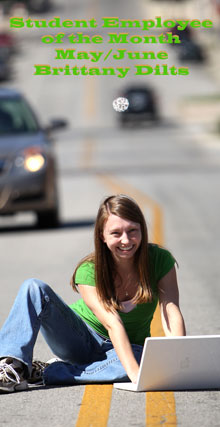 Congratulations to Brittany Dilts, web help desk student worker from the office of web and new media, who was selected as University Relations Student Employee of the Month.

Brittany was recognized for her work in implementing the University policy library. She was able to synthesize handwritten notes from multiple contacts into a standardized, online collection of 500+ policies. Her leadership and attention to detail provided quality control and proactively resolved many problems.

Please help me congratulate Brittany on this much deserved recognition.