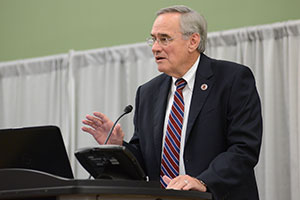 He is the second recipient of this award.

A leading force for 20+ years

Elliott has led Missouri State’s agriculture programs since 1980, balancing his responsibilities as a member of the teaching faculty and overseer of off-campus facilities with those of his administrative role. He also advises undergraduate and graduate students, as well as student organizations within the Darr School of Agriculture.

He is committed to growing opportunities for Missouri agriculture students as well as producers. In 2012, he traveled to Russia with the USDA Foreign Agriculture Service and Missouri agriculture leaders in an effort to develop and grow partnerships among educators and employers. He also continues to be involved in partnerships to grow Missouri State’s research farms and facilities, as well as to strengthen the already outstanding genetics within the University’s livestock.

“The men and women educating the next generation of Missouri agriculture are essential to the continued success of our state and our nation,” said Fordyce. “It is key that we recognize those who serve as a strong voice for the future of Missouri agriculture, especially those whose deep commitment, spanning nearly four decades, reaches throughout our industry.”

Elliot is a member of Missouri’s Agricultural Leaders of Tomorrow (ALOT) organization, and was honored with the group’s Missouri Agriculture Leader of the Year award in 2006.