Craig Hartenberger finds working in his field both challenging and rewarding. Since graduating in May of 2013 with his 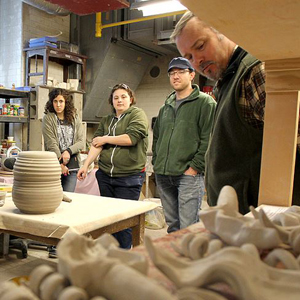 BFA in Art Ceramics degree, Craig has been engaged in a number of important art related activities.

Most recently he has been working as an assistant for Danish artist Nina Hole, who is internationally known for her site specific Fire Sculptures. These are combination performance art pieces and permanent outdoor sculptures. Craig is one of three assistants who helps Nina construct and then finish the fired forms. In the past year and a half, he has helped construct Fire Sculptures in North Carolina, Japan, and this past June, in Dusseldorf, Germany.

In addition to his work on the Fire Sculptures, Craig was an Invited Resident Artist at Guldagergaard International Ceramic Research Center in Skaelskor, Denmark, for five weeks in the spring of 2014. During this residency, he showed his artwork in two art exhibitions in Skaelskor and Copenhagen, and led a wood-fired anagama kiln workshop at the ICRC.

Craig also authored an article about the highly regarding Indiana studio artist Dick Lehman. This article can be found in The Studio Potter, Volume 41, No. 2, Summer/Fall 2013 issue. He also recently had his artwork published in the German –based art journal Neue Keramik March/ April 2013 issue, in an article on the Swedish “Wood-fired Landscapes International Symposium” which he attended in 2012. His future plans involve graduate level studies where he would pursue his Master of Fine Arts degree.

Additional information on Craig’s professional activities can be found on his blog.