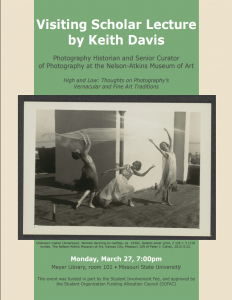 Keith Davis by far the best known historian of photography and writer living, and we are fortunate to have the amazing collection he’s built at the Nelson-Atkins as a near resource for our students. He’s authored the most important history of photography books as well as many books about photography. A very modestly written bio follows:

Keith F. Davis
Senior Curator, Photography
Keith F. Davis is Senior Curator of Photography at the Nelson-Atkins and also serves as an advisor to the Hall Family Foundation. He received a master’s degree in 1979 in art history from the University of New Mexico, Albuquerque. After a research internship at the International Museum of Photography at George Eastman House, Rochester, New York, 1978-79, he became Curator of the Fine Art Collections, Hallmark Cards, Inc. Upon the gift to the museum of the Hallmark Photographic Collection, in December 2005, Davis became the Nelson-Atkins’s founding curator of photography.
Since 1979, he has curated some 80 exhibitions, many of which have been toured to leading museums across the United States and, internationally, from Sydney, Australia, to Lausanne, Switzerland. In addition to teaching and lecturing widely on the history of photography, he is the author of nearly twenty catalogues and books, including An American Century of Photography, From Dry-Plate to Digital: The Hallmark Photographic Collection, 2nd edition (Abrams, 1999); The Origins of American Photography, From Daguerreotype to Dry-Plate, 1839-1885 (HFF/NAMA/Yale, 2007); and The Photographs of Homer Page: The Guggenheim Work, New York 1949-50(HFF/NAMA/Yale, 2009). His various awards include a Fellowship from the National Endowment for the Humanities (1986-87) for his work on the Civil-War era photographer George N. Barnard. He was honored to be featured in James Stourton’s Great Collectors of Our Time: Art Collecting Since 1945 (Scala, 2007).