The Missouri State Art+Design Department is pleased to announce designers Radovan Jenko and Sasha Vidakovic will be visiting Brick City and holding public lectures in conjunction with exhibitions of their work. 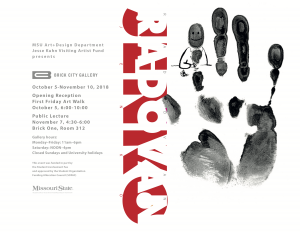 Radovan Jenko will be opening an exhibit of his work during the FFAW October with a reception at the Brick City Gallery, from 6:00-10:00PM. A public lecture is scheduled November 7th, 4:30-6:00PM in BRICK ONE, Room 312.

Jenko was born in 1955 in Slovenia. He lives in Ljubljana, where he works as a graphic designer and illustrator and teaches visual communications and illustration. In 1981, Jenko obtained a master’s degree in poster art under Professor Henryk Tomaszewski, as well as painting under Professor Teresa Pagowska.

From 1981-86, Jenko worked as an art director and designer for the Aero Design Studio. In 1991, he took up a teaching position at the Academy of Fine Arts and Design in University of Ljubljana, where he is currently a professor of Visual Communications and Illustration. Jenko is  also a co-founder of the Brumen Foundation, an institution that seeks to encourage high-quality visual communications. Since 2003, the Foundation has organized the Slovenian Biennial of Visual Communications. In 2009, Jenko established the International Poster Festival Ljubljana and has since served as its art director. 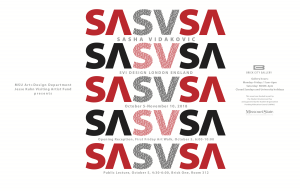 Sasha Vidakovicwill be opening an exhibit of his work during the FFAW October with a reception at the Brick City Gallery, from 6:00-10:00PM. A public lecture is scheduled October 5th, 4:30-6:00PM in BRICK ONE, Room 312.

Vidakovic is from Sarajevo, Bosnia and Herzegovina where he studied at the Academy of Fine Arts. He arrived in London in the summer of 1991 and from then on, worked with important design and branding agencies such as Interbrand, Enterprise IG, Conran Design Group amongst others. In 2002 his career took him to Milan where he was appointed as the Creative Director for Landor Associates for Italy and a member of Landor European Board for over three years. Returning to London, he established SVIDesign, an independent brand and design studio which applies a strategic and analytical approach to reach creative design solutions that last.

With 25 years of experience in the field of visual communication and branding, Sasha has created communication strategies, identity programs, packaging, environmental graphics, as well as books, brochures and catalogues, for clients ranging from big global brands to small businesses and individuals across the world. His clients list includes, amongst others: Harrods, Victoria Beckham, Rosewood hotels, Feragammo, Zegna, WWF, Alfa Romeo, Novo Nordisk, Azimut|Benetti yachts, Macmillan publishers, Volvo, Ideal Standard, Frescobol Carioca, P&G and many others.
Beside professional activities, Sasha pursues personal engagements as a member of CSD, ICOGRADA and ULUPUBIH where he occasionally gave lectures and workshops. He also designs and publishes posters as a personal response to world issues. Sasha’s work has appeared and won awards in design publications and various international poster exhibitions. He has sat on a number of judging panels for design awards (Graphis, Drum, D&AD, Design Week etc.) and was elected Fellow of the Royal Society of Arts and advisor and ambassador of Belgrade Design Week and Sarajevo Green Design Festival. Sasha is also a visiting lecturer at Condé Nast College of Fashion, London and European Institute of Design IED, Milan, Italy.