1) Tell us about  yourself. My name is Amanda Sullivan. I am a first semester senior majoring in journalism with a minor in Spanish. I’m from a small town north of Kansas City, Missouri, called Platte City. I grew up there for most of my life but did move around the state a lot early in my life. I have a little brother — little is relative. He’s almost 13 and almost as tall as me. I try to remind him he’s the younger sibling as often as I can, though, don’t worry. 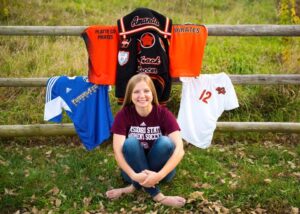 2) You seem to have a love for sports. Did you play sports in high school and/or college? What developed your love of sports? What is your favorite sport? I’ve been incredibly active from a young age. My mom started me in dance because that’s what she did, but I fell in love with soccer by the time I was 6. I tried as many sports as I could when I was young, including softball, volleyball and running. In high school, I played soccer and ran track. I also ran cross country my senior year as a way to recover from an ACL tear I suffered my junior year. My track coaches in high school were my biggest motivators when it came to being the best athlete I could be. I still credit them with my work ethic and need to be perfect — which can be a blessing and a curse.

I played one year of soccer here at Missouri State, but I had to medically retire after my freshman year because of complications from my ACL reconstruction surgery. I still spend a lot of time with my former teammates, and I live in the same building as most of the team still.

I have an appreciation for all sports but have come to love reporting on basketball. It’s funny because I never liked basketball as a kid, but I love watching it and breaking it down for my job. I will forever love playing and watching soccer. Football became a sport I loved to photograph in high school. I also grew to love taking photos at wrestling matches. In short, I appreciate all sports but some (like hockey and tennis) I prefer to watch for entertainment.

3) What has been the hardest thing about being a sports reporter in a world that has been dominated by men? I’ve been incredibly fortunate in my time as a female sports reporter. I credit that to the professionals I’m around everyday. Wyatt Wheeler of the News-Leader and Matt Vereen of KOLR10 have been nothing but encouraging and helpful in my time. They are absolutely not the only ones but I’m around them the most. I have had some tough experiences. I still find myself struggling to gain credibility with some people, especially with being a student along with being a female. I’ve had an advantage because some of the athletes I’ve covered knew I was a collegiate athlete, so they knew that I knew what they were going through when it came to practice, class, travel, etc. I also know that I struggle with dressing professionally but not too feminine in order to seem more credible. That’s probably been the biggest struggle — knowing who I am but balancing it with being credible.

4) What are your career goals? Where do you see yourself in 5 years? I used to have a lot of specific goals for my future. I’ve always been a planner. But as I’ve gotten more into the business, I know that it’s impossible to plan for the future. My dream job, though, has me covering soccer or basketball. I’d prefer to cover the college level, I think, but if I had the chance to cover professional teams, I’d do it in a heart beat. I can tell you that in five years, I’ll be preparing for my brother to graduate high school — and that’s something I’m absolutely not ready for.

5) How did you get involved in the Standard? Have you always had an interest in writing? I joined The Standard in January of 2018. I started as a reporter trainee and quickly became a part of the staff as a photographer at the same time. My editor-in-chief at the time, Alec McChesney, brought me on as a sports reporter shortly after — again, I was still going through training. I was named sports editor after a crazy series of events, and I’ve been in that position ever since. I’ve made some of my closest friends working at The Standard, and I couldn’t be happier. I’ve actually known I wanted to be a journalist since I was in eighth grade. I worked for the yearbook, taking photos and designing really basic pages. But I loved going to sporting events to take photos of my classmates. I also had a passion for writing realistic fiction in my English class that year. I owe so much of my love for writing to my eighth grade English teacher Mrs. Miller.

6) What is the greatest story you have covered? Why? This is so hard. I will always have a special place in my heart for a story I wrote about international recruiting done by the associate head coach of the men’s soccer team. I loved talking to people from all over the world. However, I think going to Ames, Iowa, and then Chicago for the Lady Bears’ Sweet 16 run was so memorable. I knew several of the players from competing against them in high school or I had class with them. Plus, The Standard’s photo editor, Kaitlyn Stratman, and myself went to Chicago and back in 47 hours by train and car, so that was an outside factor of making that trip memorable.

7) What is your favorite Missouri State tradition? Why? As a sports reporter, I see a lot of athletes and sporting events. I think every game or match I’ve covered, I’ve seen an athlete there. I don’t know it that’s technically a tradition, but I see it as one. When I played soccer, we went to other see the other athletes compete and three years later, it’s still something I see happening consistently. It’s neat to see a group of people support each other like that.

8) What is one piece of advice you would give to students? I always recommend that people try something new. For me, it was writing about basketball. I honestly knew very little about the sport beforehand. It can be way more drastic for some. Join a club or organization. Meet people. It’s such a great campus community, so people should be a part of it.

One thing I will add is that I love my job at The Standard. The opportunity to cover Division I sports is unreal. It’s had its ups and downs, but I love the chance to travel, report, study and learn from incredible professors and professionals. I am forever thankful for my decision to play soccer here. It set me up for an incredible college experience.