Collectively, turtles are among the most endangered vertebrate groups on the planet, according to Dr. Day Ligon, associate professor of biology at Missouri State.

Ligon was recently in Belize studying a turtle species of especially great conservation concern, the critically endangered Central American River Turtle. It Is locally known as the Hicatee.

“The range of Hicatee includes parts of Mexico and Guatemala, as well as Belize,” Ligon said. “Populations have mostly been decimated across much of the species’ range, but Belize stands as the last stronghold for saving the species from extinction.”

Hicatee are a culturally important food source in Belize, which has led to the decline of the species. However, the extent of the species’ decline has not been quantified. Ligon set out to test the feasibility of estimating population sizes, a prerequisite for assessing future decline or recovery. 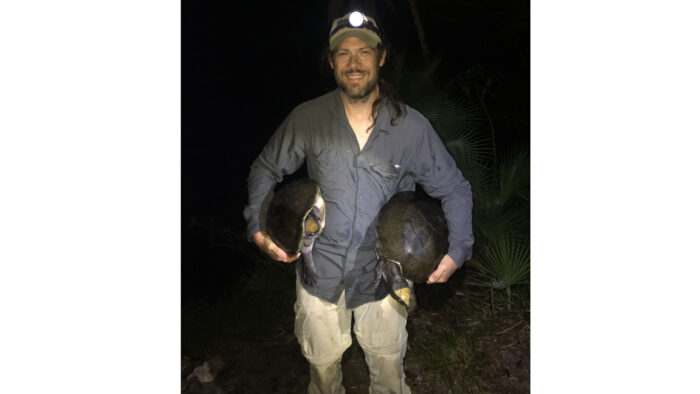 “Conservation of Hicatee is important, both ecologically and in efforts to preserve biodiversity,” Ligon said. “Ecologically, turtles often make up a large fraction of vertebrate biomass, even greater than that of fishes in some systems, so their ecological impact is potentially huge.”

“Additionally, Hicatee are the last living member of a once species-rich family of turtles that inhabited South America, Central America and Europe,” Ligon added. “The loss of this one species would also mean the loss of an entire family.” 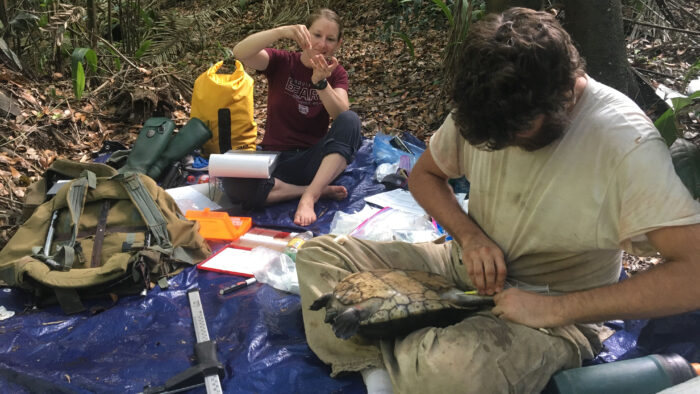 Ligon had a lot of help when he was in Belize, including MSU students, alumni and others.

Pop and Sareno will visit Ligon’s turtle ecology lab at MSU in August. They want to learn more about Alligator Snapping Turtle conservation efforts and how they might be applied to conservation of Hicatee.

Ligon’s research was supported by grants from the Belize government and the Delta Foundation. He also received logistical support from BFREE and the Wildlife Conservation Society (WCS), among others.