The Missouri State University Office of University Advancement expanded its West Plains team of professionals with the recent hire of two new advancement team members, Elizabeth Smith and Rachel Peterson, and the promotion of one internal candidate, Katie (Davis) Dudden. Each has a strong tie to the West Plains area and offers a depth of experience to benefit the organization.

Elizabeth Smith is the director of development for West Plains and stepped into her role December 1. She began her career in Jefferson City where she worked in economic development for the state. She then moved into the non-profit realm in a fundraising and management capacity.

In 2010, Smith began as the executive director for the Hawthorn Foundation where she assisted the governor in economic development work, making significant contributions through fundraising and membership growth. 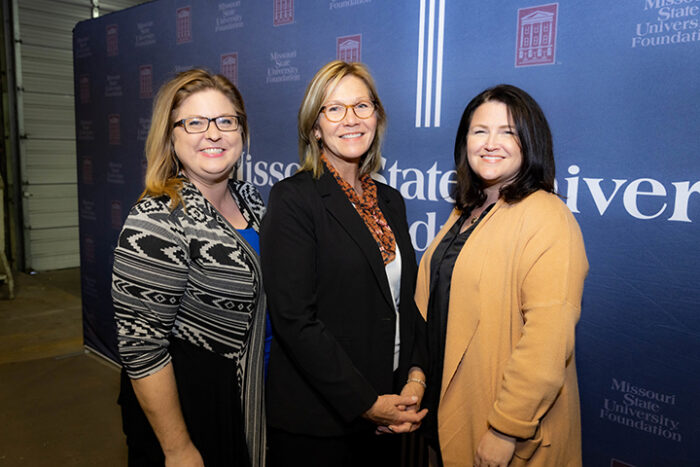 Smith brings to the university a strong background in non-profit management and in higher education. In her role at Missouri University S&T, she served as chief of staff for several years prior her most recent position as regional director at the University of Missouri Extension. At Missouri State University, Smith will direct the university’s fundraising efforts and increase partnerships in the community.

“We are ecstatic to have Elizabeth on board,” said Brent Dunn, vice president of university advancement. “She fits well into the culture of the Missouri State University development team and has the personality to connect with community and corporate leaders to continue to advance our West Plains campus.”

“I look forward to making a positive impact on the capacity of Missouri State University to serve the students, community, and the State of Missouri,” Smith said.

Smith earned her bachelor’s degree in political science/public law and a Master of Arts in public administration from Northern Illinois University. Currently relocating to West Plains, Smith is married with five children and five grandchildren.

Rachel Peterson will start at Missouri State University Advancement in the West Plains office on December 13 where she will assume the role of assistant director of annual giving and alumni relations.  In this role, she will build-on and create programs to connect alumni to MSU-West Plains and seek philanthropic gifts in support of the institution.

A veteran employee of MSU-West Plains, Peterson has worked at the university since 2000 in student services, admissions, and recruitment. She is actively involved in the university community; currently she serves as the Staff Senate President, and she has been a Grizzly Cheer Team coach since 2003.

Peterson is a MSU alumna and is currently pursuing her graduate certificate in applied communication. She lives in West Plains with her husband and has two adult children.

Katie (Davis) Dudden was promoted to assistant director, donor relations and special events on July 16, 2021. In this role she will steward and administer donor funds benefitting the West Plains campus, working closely with privately funded scholarships and plan and execute University and Foundation events. Katie began working at MSU-West Plains in 2020 and has been an integral part of the advancement team. Dudden earned her BS in marketing from MSU in 2003. Throughout her professional career Dudden, has worked in a variety of leadership roles in marketing, events, and volunteer management, earning multiple awards from her work in photography and design.

“I look forward to stewarding donor-funded scholarships and the opportunity to help empower MSU-West Plains students to achieve personal success and enrich our local and global communities,” Dudden explained.

Dudden is a West Plains native and resides in the community with her daughter.

“These three are a strong addition to the West Plains University Advancement team and are joining at an ideal time as the university continues to grow and advance,” said MSU-West Plains Chancellor Dennis Lancaster. “Elizabeth, Rachel, and Katie will be instrumental in continuing to move the West Plains campus forward.”

Missouri State University Advancement aids the university in achieving its single purpose “to develop educated persons” by providing financial support from the private sector, promoting public support, and encouraging volunteerism. University Advancement supports the MSU network of campuses, including MSU-West Plains, through the Missouri State University Foundation, a 501 (c) (3), not-for-profit corporation that encourages private financial support for Missouri State University and manages an endowment on behalf of the university. The Alumni Association fosters continued student support and community connectivity after they leave the university. The Alumni Association is a non-dues paying organization, and all alumni are viewed as members. One of the main goals of the Alumni Association is to maintain current records of all alumni. Currently, the alumni population includes more than 130,000 graduates and former students. For more information about ways to support MSU-West Plains, call 417-255-7240 or visit missouristate.edu/UniversityAdvancement/