Ancient Athens can be credited for so much of the foundation that is today’s society: drama, both tragedy and comedy, and democracy with laws made by the people. Dr. Edwin Carawan, professor of modern and classical languages at Missouri State University, noted that the ancient Athenians also created the art of speech writing and rhetoric, both of which have inspired his publishing projects, which have focused on the intersection of law and rhetoric.

“The Athenians had quite a list of statutes written down on everything from business deals to prosecuting a killer. The really interesting thing is these rules sort of shaped the rules of rhetoric or the art of argument – the way you persuade people to take your side in a case,” Carawan said.

While the inscribed laws list the do’s and don’ts of Greek society, Carawan focuses more closely on the speeches delivered in those days. While it is now standard practice for most politicians to have a speech writer on staff, speech writing for profit was something the Athenians created. 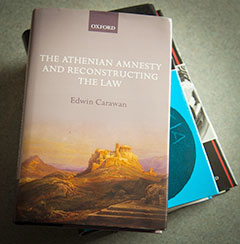 Dr. Carawan noted that the ancient Athenians created the art of speech writing and rhetoric, both of which have inspired his publishing projects.

Based on these speeches, Carawan derives what the layperson presumed about the laws and how statutes were interpreted, giving Carawan a deeper understanding of the culture. This cultural understanding is what motivates him to each new research project, recognizing the differences in lifestyles 2,500 years ago and the metamorphosis of ideas and beliefs over time.

“I find I use this obsession of mine all the time,” he said. “When reading Plato’s “Apology” with students, these concerns come very prominently into discussion. Looking at the trial of Socrates and the charges against him, we discuss popular thinking on issues like freedom of speech and freedom of conscience.”

Civilization gives him plenty of ground to cover

Carawan’s most recent book, “The Athenian Amnesty and Reconstructing the Law” (2013), addresses how the law system was rebuilt after a divisive civil war between the 400 and 300 B.C. After that war, people had to not only reestablish statutes, but they also had to decide which punishments and obligations carried over from one regime to the next. His first book, “Rhetoric and the Law of Draco” (1998), focuses on homicide law.

Research for his next book has already begun in which he will investigate constitutionalism at Athens, particularly looking at the question of the sovereign governing body being accountable to a higher power. From his early research of the 400 B.C. period, he has noted the only higher authority seems to be the best interest of the people. 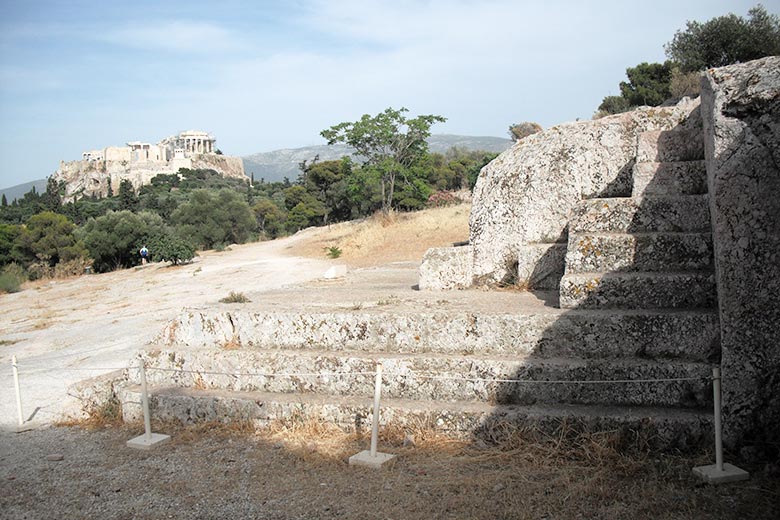 “The really interesting thing is these rules sort of shaped the rules of rhetoric or the art of argument – the way you persuade people to take your side in a case.” — Dr. Edwin Carawan

“What interests me is that in the mid-300s B.C., there are a number of important speeches that seem to be reaching for something that most people haven’t got yet – a kind of contractual idea. That people, when they make decisions, form certain obligations,” said Carawan. “The idea that a higher authority could arbitrarily change any of those commitments is puzzling and problematic to many of the speech writers.”

Sharing his passion with students, scholars

It was during his own college years that Carawan became fascinated with political theory and ancient literature, and his passion for and curiosity on the subject is endless. Part of this interest stems from the inherent uncertainty when looking at historical texts and accounts of the same event.

“There’s always something that bothers me in the body of inherited opinion – something that has become what I like to call the canned goods just doesn’t smell right. So you go back and look at the evidence again and see what the other approaches might lead you to,” he said.

He hopes to share this passion with many more students, and one way is through a study abroad program to Greece that was recently established.