Can you change your personality?

At the head of a long board room table sits the CEO. She is a textbook Machiavellian personality. She flatters a subordinate to gain information one minute and twists the information to exploit that employee and use it for her own personal gain the next.

Does she feel empathy for those she squashed to get to the top?

The studies of Dr. Amber Abernathy say no.

In this research project – one of approximately 20 that she conducts at any given time – individuals were randomly assigned to watch one of three video clips. These videos, selected because they almost universally strike a chord of empathy, included five minutes of babies crying, a bullying scenario and a heartbreaking scene from “Legends of the Fall” in which one brother dies in the other’s arms.

Although the individuals reported feeling empathy, their skin and physiological responses showed no change. According to Abernathy, this could be due in part to false reporting by the subject to improve his or her image. She doubts it, because Machiavellians don’t usually care too much about others’ opinions of them. Or it could be that Machiavellians don’t know what true empathy feels like.

Abernathy, who teaches personality courses, says that although Machiavellians are known to be high in manipulation and neuroticism, they have positive qualities as well.

“They get things done,” she said. “They’re very goal-driven.”

This study, published in Adaptive Human Behavior and Physiology, is inspiring another study to test for conscientiousness in Machiavellian personalities. 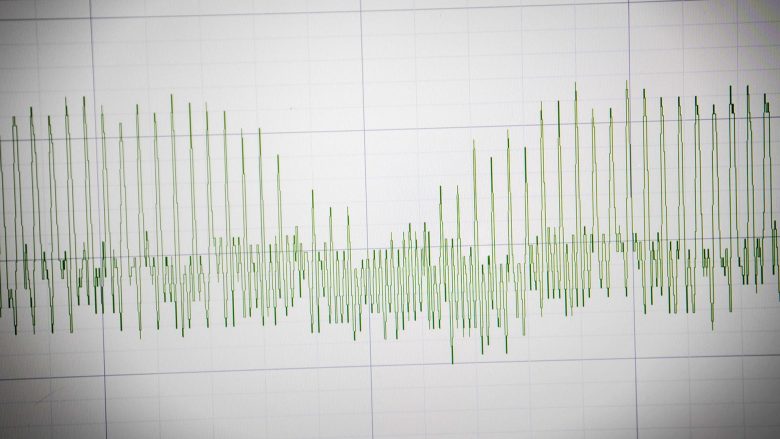 Biofeedback is one way Dr. Amber Abernathy can prove that mindfulness has physiological effects. Photo by Kevin White

“How do you get on top?” asked Abernathy, who has published numerous peer-reviewed studies on dominance.

She’s talking about perceived popularity. Females use relational aggression, like “gossiping and backstabbing, where males might use physical aggression,” she said.

In another study published in Adaptive Human Behavior and Physiology, she administered a survey to a group of adolescents to determine dominance. After that, the participants played a reward allocation game in order to study how their personalities would affect their physical bodies. She pre-tested each individual’s saliva for cortisol, a stress hormone, then continued to test it at regular increments.

“The dominant female would get more stressed out at the beginning of the game. Not because of the game, but before the game,” she said. “Mid-game, the girl would realize, ‘I got this,’ and her cortisol would decrease.”

She noted that the reactions from males in the scenario were completely opposite. What was novel, though, was that Abernathy discovered a correlation between the social positioning and stress level of the individuals that caused them to respond differently.

Her overarching research goal is to increase people’s conscientiousness, which is one of the big five personality traits in psychology. But she doesn’t want to just look at what conscientiousness is related to. She “actually wants to help people to work to change their personalities.”

This is a controversial topic, according to Dr. Jennifer Byrd-Craven, who served as Abernathy’s advisor at Oklahoma State University. Byrd-Craven sees personality as stable across the lifespan, while another of Abernathy’s research projects revealed that through structured goal-setting, participants increased conscientiousness (thus changing their personalities).

Byrd-Craven, who has also served as a co-author on several publications, supports Abernathy’s work wholly.

“I have no doubt that she will make significant contributions to our understanding of how personality and biological factors are related to leadership and overall health.” 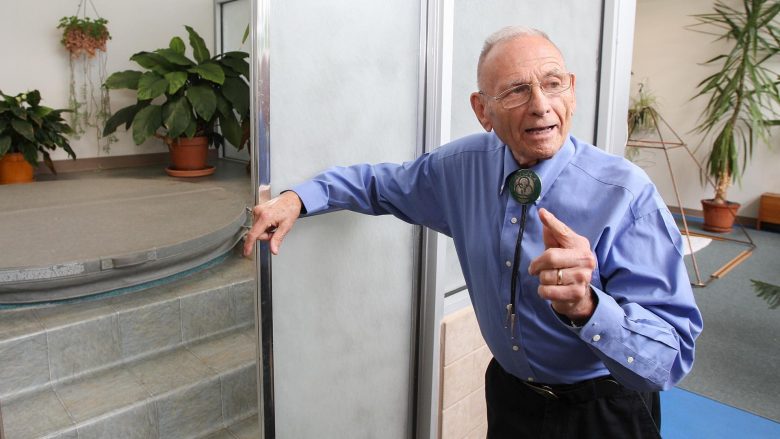 Connecting the physical and emotional

Abernathy likes to connect the dots between the physical and the emotional. She recently completed a study in which individuals made intentional choices toward becoming more conscientious for five weeks, and results showed improvements in health and energy level.

“If you are organized, responsible, neat, tidy, prepared,” which is indicative of conscientiousness, she said, that can reduce stress. This could account for some health benefits, like relieving tension headaches.

But conscientious people also, “tend to be better at health practices,” like brushing teeth, regular doctor visits, taking medicine, and drinking herbal tea, she says as she stirs her cup.

“Basically, your life view of how things are going can overcome what you’re actually physically feeling” — Dr. Amber Abernathy

Dr. Norm Shealy agrees. He’s the developer of the TENS Unit (predominately used for nerve related pain conditions), a world-renowned neurosurgeon and chronic pain specialist who has narrowed his focus to holistic practices.

Shealy maintains that 80 percent of disease is the result of lack of responsibility for healthy lifestyle. Because of this connection between conscientiousness and health, Shealy established – in his late wife’s honor –  the endowed chair Abernathy now holds.

“Amber is a ball of fire,” Shealy added. “Hopefully Amber will develop tools to help everyone become more conscientious.”

Check how you stack up in the big 5 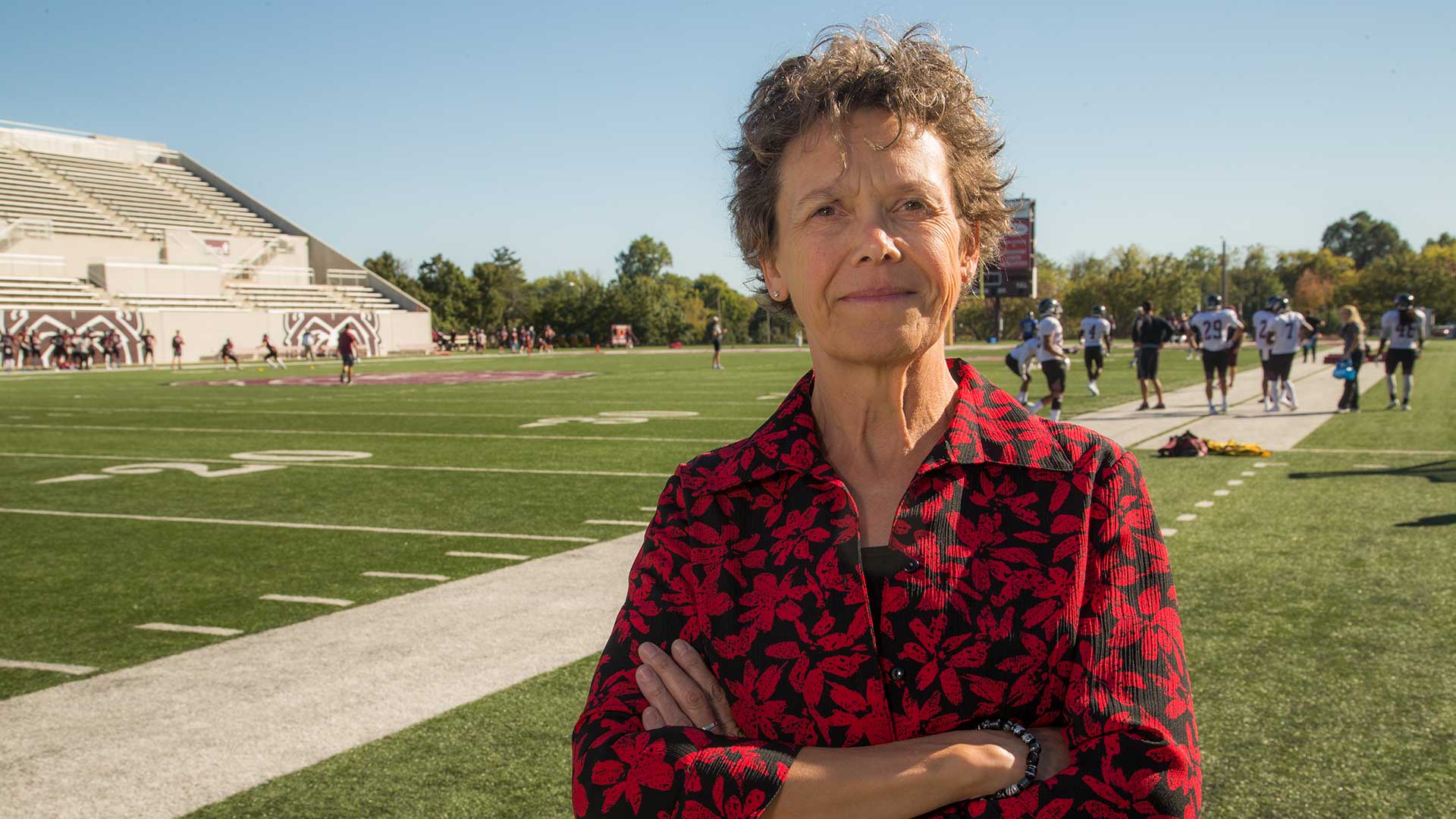 Risky business: The future of football in the United States

Would you allow your child to play football?

If you said yes, Dr. Pam Sailors encourages you to reconsider.

Professional and college football is one of the most-watched dramas in the U.S., but it’s become known as a risky activity.

“I’m torn about this. It’s kind of like ignorance is bliss in many ways. It’s hard for me not to watch football, but I feel kind of scuzzy about it if I do because it’s like watching people in a fight club or something. Because you know they’re hurting one another and you’re taking some sort of pleasure in it.” — Dr. Pam Sailors

Sailors, associate dean of the College of Humanities and Public Affairs, focuses her research on philosophy of sport. She reviews previously published pieces, then adds her own ideas to the discussion.

She’s written more than 60 papers, presented at about 50 conferences and appeared as an expert source in more than a dozen media publications.

Sailors published Personal Foul: An Evaluation of the Moral Status of Football in 2015. The paper was the first to use philosophical argument to challenge the ethical acceptability of football, both amateur and professional.

“Pam’s research is novel and makes not only an important contribution to the literature, but is also applicable to real-life scenarios,” said Dr. Charlene Weaving, an associate professor at St. Francis Xavier University in Nova Scotia. “She has an ability to make ethics come alive.” 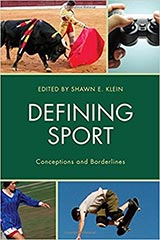 Playing football is ethically problematic for three reasons, Sailors said: the likelihood of brain damage, objectification of players and a culture that entitles players to free passes for some social offenses.

When it comes to the likelihood of suffering brain damage, Sailors specifically referenced chronic traumatic encephalopathy, CTE, or brain deformation caused by repeated subconcussive blows to the head.

“We know now that smoking causes health problems. We don’t let kids do it,” she said. “We don’t even say, ‘We’ll just let them smoke a little bit until they’re 18, and then they can choose.’”

Sailors cited one National Football League, or NFL, survey that showed almost half of retirees said they suffered from severe pain as a result of playing. The game’s head injury risk could affect its popularity.

“We still have boxing, but it’s not as popular as it once was,” she said. “I think football may be on a similar track unless there are some radical changes. The changes might be so radical that we wouldn’t even think it was football anymore.”

Why make millions when others make billions?

Football players should be paid appropriately for taking on those health risks, Sailors said, but that isn’t happening in the NFL or university teams. She cited a 2013 report which stated the top 10 NCAA football programs banked more than million and did not pay their athletes.

“I know professional football players make what seems like a lot of money, but compared to what the owners make, and the number of years they make it, they don’t,” Sailors said.

“College players are not supposed to make money. I think there’s just a huge profit being made on the backs of people who are the ones who are having the bad health consequences, but they’re not getting their fair share of the profits.”

A culture of acceptance, no matter the offense

Finally, there’s the issue of players seemingly getting free passes for bad behavior off the field. Sailors described it as a problem with football culture, exemplified most recently by Oklahoma running back Joe Mixon.

He was a first-round draft talent whose stock fell after video surfaced of him hitting a woman in a restaurant. The Cincinnati Bengals still drafted Mixon in the second round and will give him an opportunity anyway.

Sailors noted in “Personal Foul” that a culture of violence and “idealized masculinity” contributes to such behavior, especially against women.

These issues are not unique to football, she said. But here’s what is.

“Other sports have brain injury trauma problems, take advantage of players for profit and have a culture of entitlement,” Sailors said. “But what makes football unique is it’s got all three.”

The next step in Sailors’ project is determining what this means for spectators and fans of the game.