Hope in the fight against HIV

With the development of a cocktail of prescriptions, survival rates skyrocketed.

Still, about 50,000 people in the United States are infected with the virus each year. And one out of every eight people who is HIV positive doesn’t know it.

Dr. Amy Hulme, assistant professor of biomedical sciences, studies the inner workings of the virus and how it replicates. She hopes her work will lead to the development of a vaccine or better drugs to prevent transmission.

In the last 10 years, she published 11 articles on this research in publications like the Journal of Virology. She also served as a peer reviewer for this journal.

Hulme is fascinated by HIV because it does a few things that really should not work. It is unique among viruses because it mutates, making it difficult to predict the usefulness of medication.

It is also unique because it is one of only two human viruses classified as a retrovirus. HIV gained this classification based on how it copies itself inside a cell. First it transfers the RNA genetic material of the virus into DNA – a process called reverse transcription. That DNA then gets inserted into the cellular DNA. 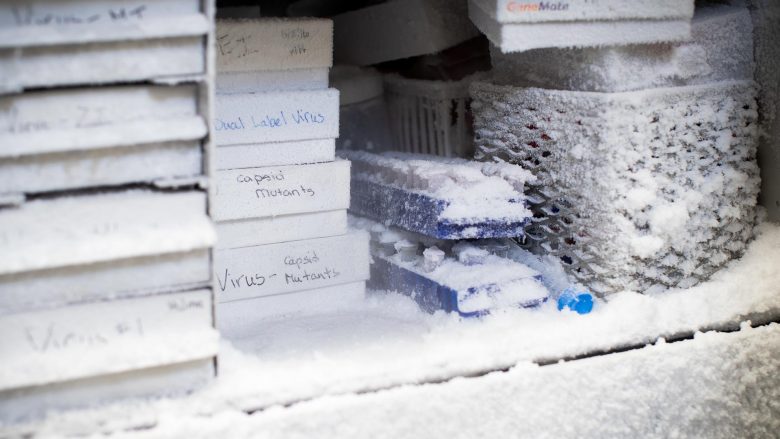 In Dr. Amy Hulme’s lab, she studies how HIV replicates itself in cells. Specifically, she looks at the how and when the capsid (or coating) comes off. Photo by Kevin White

Or at least that’s what the scientific community originally thought – that it was a linear progression from the uncoating to reverse transcription. No one truly knew how and when this uncoating occurred – or the significance.

Her post-doc adviser, Dr. Thomas Hope from Northwestern University, believed that the virus entered a cell and the coating fell off immediately. Many others in the field thought uncoating happened before reverse transcription.

If the coating stayed on, would the DNA ever become one with the host cell? Hulme knew that the biological community would benefit greatly from further studies on this step. After all, blocking the uncoating step might mean a medicine or vaccine could be developed to prevent HIV.

Hulme established an experimental technique using an instrument called a flow cytometry. This device analyzes particles in a fluid as they pass through a laser. Since she developed this new technique, it has been included in numerous studies – by her and others in the field – to dissect the how and when of the uncoating process. 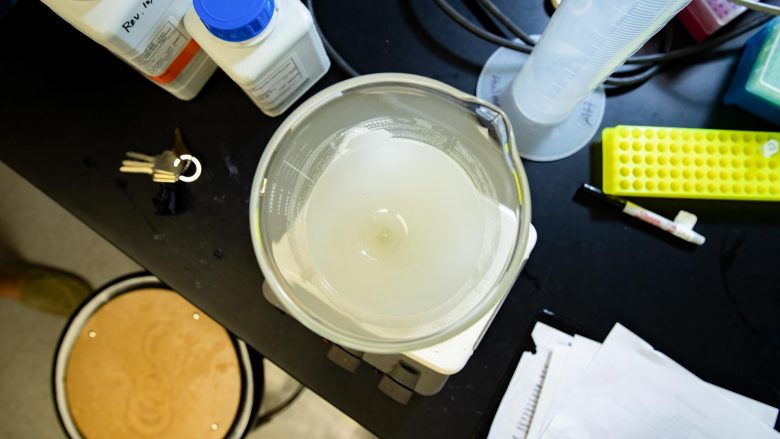 Owl monkeys have a protein that blocks HIV replication, so they have been key to this research.

Hulme delivered a drug to cultured owl monkey kidney cells, which affected how that immunity protein stuck to the coating. Then she removed the drug at different intervals and used a flow cytometry to determine how much of the virus was coated and uncoated at each stage.

If the virus was uncoated, she noted, it could no longer be protected by this restriction protein.

In this method, she and her students label the virus with fluorescent proteins. Then, the proteins will glow under the microscope and can be monitored to detect the coating at different times.

“If you get the same answer with both techniques,” she said, “you can be much more confident that result is a real result, and not due to some weird experimental artifact.”

Uncoating seems to impact a lot of other steps that happen kind of at the same time, and immediately after it. It’s an important step to understand, it’s just very difficult to study. — Dr. Amy Hulme

Her studies determined that the majority of uncoating happened within the first hour.

“When we delay reverse transcription using a drug, we also delay the process of uncoating,” said Hulme, which leads her to the conclusion that there is some interplay between the steps. “It’s becoming very clear that it is a very central step that affects a lot of different steps in HIV replication.”

Hope is proud of the impact Hulme has had on the field.

“She had great success tackling a major research mystery in the HIV life cycle,” said Hope. “Because her approach was unique, it was controversial in the field at first. But ultimately, she was correct.”

Now that there is more understanding on the process, Hulme is beginning to look at how untreated AIDS makes its way to the brain and causes neuro-cognitive disorders.

Explore the department of biomedical sciences