She studies swimming and scampering species

Under rocks and logs, in burrows and underwater, Dr. Alicia Mathis finds fascinating creatures to study. Mathis, head of the biology department at Missouri State University, focuses her research on the behaviors of tiny amphibians and fish, but also on the second largest salamander in the world, the hellbender, which is listed as an endangered species.

Although she sees the beauty in the way they move and communicate, so much of their lives are hidden from the average hiker. Sometimes these animals are hiding from predators, while other times, they only seem hidden due to their small size and cryptic colors: Terrestrial and stream salamanders are only the size of an earthworm.

So, to me, it’s incredible. I have to emphasize, we’re talking about an animal the size of an earthworm and yet they can do all of this incredible stuff.

Mathis argues that these species each are intricate and fascinating despite their size.

“We have all these ideas about the challenges animals encounter and how they have adapted to meet those challenges,” she said. In a natural habitat, these challenges include: avoiding predators, finding mates, dealing with competition, and locating good habitats and food. “What can animals do to increase their probability of survival and reproductive success? That’s really the bottom line as far as biology is concerned. Everything, from the way your cells work to the way ecosystems work boils down to this.” 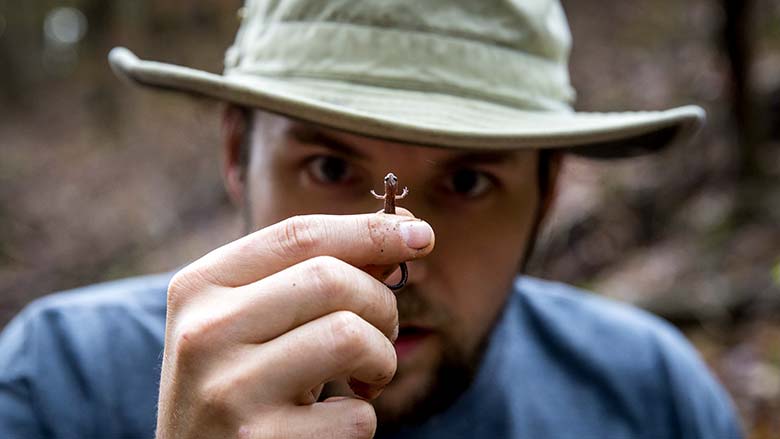 Even if you find these creatures a little creepy, Mathis says they can serve as a model for addressing questions about sensory behavior in other species, including humans.

In the field of behavioral ecology, or the study of how animal behavior evolves due to ecological changes, she delves deeply into aggression and territorial behavior, predation responses and pheromones. The methods of communication she’s seen are far more sophisticated and complex than people might assume.

Terrestrial salamanders, for instance, which abound in forests, are ideal for studying issues of competition and territoriality, according to Mathis. They defend territories, fight over patches of forest floor to maintain access to food sources and females guard their eggs. 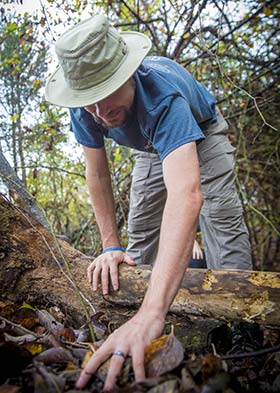 “It turns out that there’s some interesting social behavior going on. In some species where males and females form pair bonds, they pay attention to whether their partners have been cheating on them.”

Unlike a peacock that can flaunt its feathers or a frog that can croak its displeasure, these terrestrial salamanders don’t advertise themselves visually or vocally. Instead, they produce territorial pheromones like many mammals, and Mathis studies how these salamanders can communicate chemically only by olfactory cues.

“Then we start getting into weird stuff, like they can tell what type of diet the other animal has been eating: high-quality or low-quality? They can tell whether the other animal is parasitized or not, which might tell them something about the condition of their opponent, and it might tell them if they should hang out with that other individual. Then they can differentiate and respond differently in each context.”

The study became the basis for Dalton’s thesis, as well as a conference presentation and an article in Chemoecology. Over the years, Mathis and her students have co-authored over 70 journal articles and book chapters, made over 100 conference presentations and received over $125,000 in external grant funding for her work. 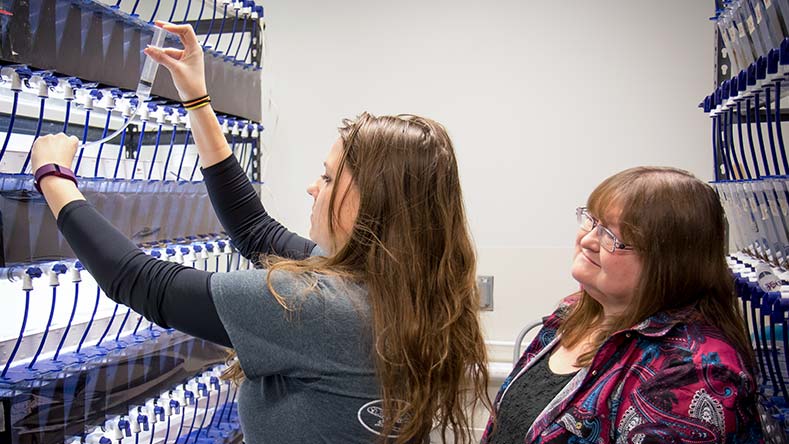 At Missouri State, many biology undergraduates and almost all graduate students perform research under the supervision of their advisers. Mathis enjoys exploring the answers to the research questions her students pose.

Though a microscope isn’t needed to study the responses of these animals, she and her graduate students have had to employ creative techniques to follow some of these animals in her studies. 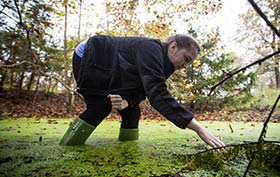 “We have done some field work, including snorkeling and following darter fish while using an apparatus to expose them to the chemical cues we introduced in the water, which was pretty cool,” she said. “And we’ve gotten verification that they were responding the way we’d seen them respond in the lab.”

While snorkeling through streams and ponds, digging past water table levels in streams that have run dry, and camping out next to the waterways to observe the nightly behaviors of these animals is exhilarating, most of the work takes place in a lab that simulates their natural habitats. Their practicality is a primary reason these animals are Mathis’ first choice subject in her 350 square foot lab.

“For some of them, their natural habitats include burrows, so being in a really small space is something they like,” she said. “They also adapt really well to the lab and show no signs of stress with people walking in front of the cages.”

Her post-doc work led her to Canada, where she continued her chemical communication research, but she expanded it to learn more about interactions between predators and prey. More specifically, she looked at how chemical cues help stickleback and minnows (more appropriate research subjects for that region) survive predatory encounters. When minnow skin is scratched by a predator, it releases an alarm pheromone, which conveys to other animals that there’s an active predator in the area, causing the fish to flee, seek shelter or school tightly together.

“Clearly minnows that respond to that chemical are going to increase their likelihood of survival. But one of the most eye-opening discoveries from the study was that there could be cross-species responses,” she said. “It’s not only that minnows can respond to alarm cues from other minnows, but they could also respond to other really distantly related fish, like stickleback. They can respond across very large taxonomic divisions.”

At Missouri State, she and undergraduate student Michael Lampe demonstrated that terrestrial salamanders can respond to alarm cues from earthworms, which is significant since they have similar predators. And current graduate student Kelsey Anderson is looking at the responses of darters – little stream fish – to salamander alarm cues. 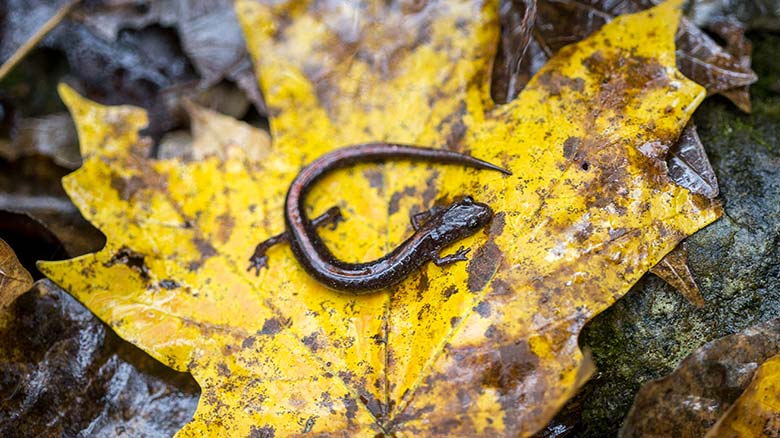 Though she started some of this work as early as her dissertation, she’s conducted follow-up studies using Ozarks species since she came to Missouri State in 1993. It’s a “treasure trove of salamanders,” she jokes.

At that point, she also decided to merge some of her previous interests and studies to understand how predation risk influences territorial behavior and answer this question: Does experiencing high risk of predation influence the way an animal defends its territory? 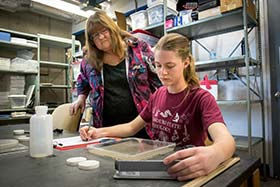 One study always leads to the next – innate curiosity is essential to being a scientist, said Mathis – so she then studied antipredator behavior in a pond breeding salamander, the ringed salamander, which is a species of conservation concern in Missouri.

The free-swimming larvae of the ringed salamander are just like tadpoles, and are in grave danger in the pond with major predators like birds, other salamanders, snakes and aquatic insects surrounding them. But how do these larvae recognize predators and survive until metamorphosis? Smell, said Mathis.

In addition to communication and territoriality, Mathis has also examined how these animals learn. For instance, how do they learn which animals pose a threat?

“We’ve deduced from what we’ve seen in a couple of different species that they’re actually learning from each other – so social learning. And we’ve got a couple of studies that show they can learn while they’re still embryos,” she said. “These eggs are basically bathed in information; many smells are surrounding them. We had one experiment that showed that if you housed the eggs in water that predators have been in, the larvae spent more time hiding in vegetation once they hatch than if they weren’t exposed to cues from predators while they were embryos.”

When studying chemical communication in these animals, the naked human eye usually can’t see the emitted pheromone. However, for one salamander species in particular, the hellbender, it’s a dramatic frothy white secretion.

Missouri is the only state to call both currently recognized subspecies of hellbenders home, and Mathis has been researching them since 1997. In the last few decades, though, the population of hellbenders in Missouri has declined more than 75 percent.

“When you see these animals and how fabulous they are and how they deal with regular challenges, and then you see environmental challenges being layered on top of that, it’s a huge concern. You have to wonder how long they can continue dealing with these new challenges. It has quite significantly impacted the way I study animal behavior.”

Agricultural runoff and pollution are just two of the concerns for waterways, and Mathis found that hellbenders are great models for environmental studies not only due to their practicality, but also their pickiness for the perfect environment. She noted hellbenders require fast-flowing, cool, clear water to get the proper amount of oxygen, so they serve as an indicator for environmental health and subsequently, public health.

“Biology – it’s very complex in the way that every detail has to work together to produce an outcome, and that’s what interested me in the first place,” she said.

My work is the kind of thing that people generally have some kind of familiarity with because it’s covered on nature documentaries, and people love that stuff!