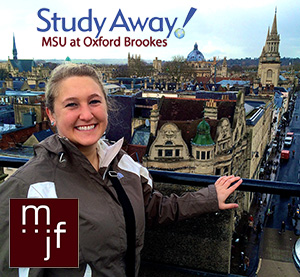 At Oxford Brookes University (OBU), I am currently enrolled in Issues in World Cinema, Independent American Cinema, and Preproduction for Independent Filmmaking. At first, I was really intimidated about coming to OBU, because IT IS OXFORD and has a very prestigious reputation. I have found that the course load is essentially the same as taking class at MSU and is something any MSU student is capable of doing.

In my class, Issues in World Cinema, we must watch a movie each week and read articles that are related to the movie of the week. My grade in this class is made up of a 1,500 word essay, one test, and attendance. For Independent American Cinema I have to give a presentation about an Independent American Film, take a test, and write a 1,400 word essay. In Preproduction for Independent Filmmaking I’ve been assigned to develop a story line and create a budget for a film and then present it to the class.

In Preproduction for Independent Filmmaking we have learned many skills that will be helpful in our careers. For example, we learned how to make fake blood and create a fake wound, how to handle stunts on set, and how to scout a location. I think this course is the most exciting and interactive class I am currently taking at OBU. 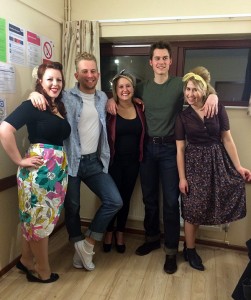 Outside of classes I have met so many different people from all over the world. I live with five other people in a flat on campus. We all share a bathroom and a kitchen, but we all have our own rooms. I live with a girl from Norway, England, and Hong Kong. I also live with two boys from Australia and France. We all get along exceptionally well and enjoy talking to each other and learning about each others countries and cultures.

Until next time,
Andrea Welker

“I haven’t been everywhere, but it’s on my list.” —Susan Sontag