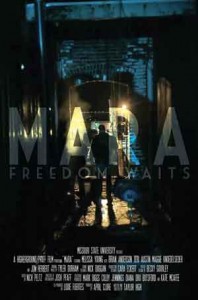 The 2014 student film “Mara” has been selected to screen at the Kansas City FilmFest at Cinemark Place on the Plaza, April 15-19.

The short film has been awarded honorable mention in the 2015 Broadcast Education Association (BEA) Festival of Media Arts and is a finalist in the upcoming 36th College Television Awards.

The retro-noir film was a student project that debuted at the 2014 electronic arts student showcase. Set in the dystopian Mara City, the film follows an ex-government soldier on a mission to complete one last job for a mysterious old flame. It was written and directed by Taylor High and produced by April Clore, Wes Walker and Evan Pollock. Executive producers included Missouri State professors Diana Botsford, Mark Biggs and Colby Jennings.

The annual, juried film festival features more than 100 local, regional, national and international films. From second-graders to professionals, filmmakers have the chance to show their work and compete. More than $200,000 in cash and prizes have been awarded since 1997.