The printing presses for Missouri State’s The Standard will be back in action soon as the student-run newspaper heads into the fall semester with incoming Editor-in-Chief Nicole Roberts at the helm.

Roberts, a senior print and Internet journalism major, is from Rolla, Missouri. She graduated high school from nearby Vienna, Missouri.

After an extensive application process last April, Roberts was appointed to the editor-in-chief position by MSU’s Advisory Board for Student Publications.

She has been on staff at The Standard since May 2014, first as a reporter and then as a news editor. She says she’ll use that experience to make a few changes to the paper this year.

In this Q&A, Roberts talks about those changes, what she looks forward to as editor-in-chief, or EIC, and more.

What are you most excited for as EIC this year?

I’m really excited to watch everyone on staff develop their skills and go out of their comfort zones. I always feel proud when someone on staff learns something new, whether it be an unique way to write an article, a different way to shoot photos, or a cool way to design a page for the newspaper.

Has anyone given you advice yet for how to do the job?

I received advice from Jack Dimond (The Standard’s faculty advisor), editors at The Standard, professors, friends and my parents. I guess the best advice was from my mom … She told me to act like how I would want an editor-in-chief to act. This advice forces me to ask myself, “If I were a reporter or content editor, would I want my editor-in-chief to do this?”

Are you planning any changes to the paper this year?

There are two things I really want to focus on this year.

The first thing is improving interaction with students, faculty, staff and The Standard’s readers in general.

I don’t want people to view The Standard as this mystical paper that suddenly appears on Tuesdays and that’s it. I want readers to see that people at The Standard are working throughout the week — not just Monday nights — to create a good paper.

These interactions will also help The Standard staff hear more from students, faculty and staff on their thoughts about things going on around campus and Springfield.

The second thing is I’m putting an emphasis on multimedia this year. The editors have been throwing around ideas on how to improve our social media presence and how to incorporate other media into The Standard articles.

We live in a world of media, so why not take advantage of that?

Why should the campus community care about The Standard?

The Standard is a great way for the Missouri State community to learn about what’s going on around campus. I know that is a pretty stereotypical answer, but it really is true.

There are four sections in the newspaper: news, life, sports and opinion. That means there is a lot of information in all four of those sections that students might be interested in or benefit from.

The Standard is also a great way to build connections with other people at Missouri State.

For example, last semester, I wrote an article about a new radio station that may be coming to campus. Afterward, I had someone ask me for the contact information of the four students I talked to in the article because she wanted to figure out a way to join the radio station they were working on.

That connection might not have happened if I hadn’t pursued that story. 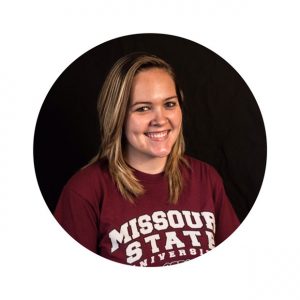 What do you want to do after graduation?

That’s the million-­dollar question. Like almost all college students, I’m not 100 percent sure, honestly.

I guess the best answer I can give is that I would really like to write for a news magazine like The Week, but I know that the chances of doing something like that right out of college are slim, so I’ll probably try to write for a local newspaper and work my way up the ladder.

There are so many options, and I want to try almost all of them.

What advice do you have for students interested in working for The Standard?

I would say to throw away any of their fears about joining The Standard and just do it.

I had never written for a newspaper or even taken a journalism class until I joined The Standard, and to be honest, I was absolutely terrified when I first started working here because I had very little experience. I thought for sure that I had gotten myself into something that was way over my head. Now, two years later, I’m so glad that little freshman Nicole decided to take a leap of faith and join The Standard.

If students want to join The Standard, they can contact Jack Dimond, the advisor for The Standard. When students join, they will go through this training process where they will learn how to write articles, interview people, use correct AP style, and so on. Once they get done with the training, they become part of The Standard staff and will start writing articles for the newspaper on a weekly basis.

*Editor’s note: This interview has been edited for length or clarity.