Since its first season in 2015, Show-Me Chefs has entertained audiences with televised culinary showdowns between area chefs. It’s quickly become a local tradition — with an emphasis on local.

Show-Me Chefs creator Deb Larson, associate professor in the department of media, journalism and film, shared, “It sort of came to me as we were developing the show that most Americans are very disconnected from our food sources and producers.”

Larson said, “I want people to know we have all kinds of food being grown right here in southwest Missouri. Even year round you can buy fresh produce at the farmers markets. It’s a celebration of who we are.”

Over the course of three seasons, more than 130 students have worked on Show-Me Chefs, filming 24 contestants who’ve served up more than 250 meals. Their work was recently recognized with a 2017 College Arts Emmy nomination in the Series-Unscripted category.

It’s a very hands-on learning process, and Larson knows when to step in as an educator and when to allow students to solve problems as they arise. “It’s all about them understanding how to be self-didactic. It’s a big crew, and the standards are high. If they don’t know something, they have to figure it out,” she said. “But they also have a team unit to help them troubleshoot issues.”

This course structure is modeled on a process called instructional scaffolding, which emphasizes providing targeted resources and support for students in a customizable learning environment — with the ultimate goal that students gain autonomy in the field. 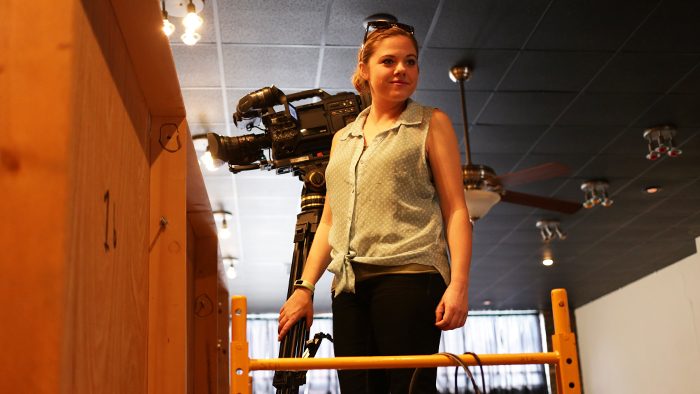 Instructional scaffolding has long been employed through internships and learning from team supervisors or mentors. But Larson has formalized the process in student production by dividing a large team into production units, such as camera and lights, art department, and producing and directing. Each unit is led by a graduate student, who provides guidance to the upper- and lower-division students that make up the rest of the team.

The set offers a complex ecosystem in which to learn. “It really makes you appreciate how many people it takes to make a show,” Larson said. “Every single person’s job is important to the whole.”

An innovative take on public affairs

While the connection between a cooking show and Missouri State’s Public Affairs Mission may not be readily apparent, Larson sees a lot of overlap through community engagement. “We interface with so much of the Ozarks community to produce this show,” Larson said. “There are a lot of local food producers who are out there making a living or enhancing their income through their love of growing food, and we like helping people learn about and support them.”

By showcasing these ingredients, Show-Me Chefs hopes to inspire viewers to eat locally, which Larson believes contributes to a balanced lifestyle. She said, “If you eat local and seasonally, you’ll be better off for it.” 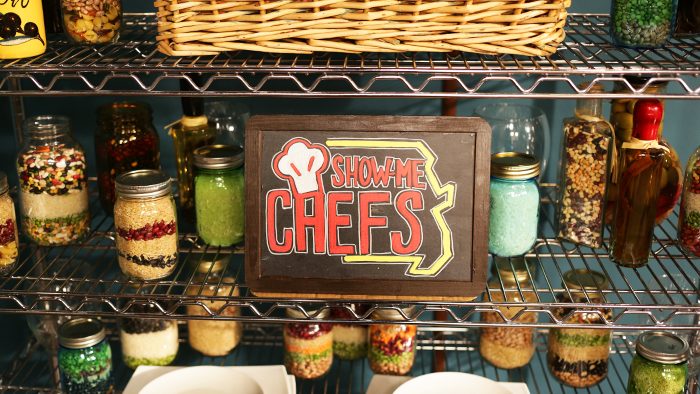 As an additional investment in the community, Show-Me Chefs donates a portion of the proceeds from its annual gala to Missouri-focused nonprofit Care to Learn. According to the Care to Learn website:

For thousands of kids in Missouri, school isn’t just a place for learning. It’s a shelter. A kitchen. A refuge from suffering. For these kids, hygiene needs go unmet. Meals are few. And clothes rarely fit. They come to school distracted by hunger and limited by embarrassment—their education an afterthought to survival.

The Mission of Care to Learn is to provide immediate funding to meet emergent needs in the areas of health, hunger and hygiene so every student can be successful in school. These are the things that stand between children and belonging—basic unmet needs that cause pain and embarrassment.

Larson said donating is important because “we want some of these kids to attend college later. And if they’re made to feel like they can’t learn and can’t succeed, they won’t believe they can do that. So we want to be part of making them feel successful now and in the future.”

Support from the community

These opportunities exist because many aspects of the Missouri State and Springfield communities provide support. Larson is grateful for resources provided by the university, the College of Arts and Letters and the departments of communication and media, journalism and film.

Individuals can learn about opportunities to get involved by following the Show-Me Chefs Facebook page (which also serves up tasty, behind-the-scenes sneak peeks and information about the October 2017 Show-Me Chefs Gala).

The Missouri State campus is a source for two Show-Me Chefs ingredients: beef and wine from the Darr College of Agriculture.

Larson praised this cross-campus collaboration. “It’s great working with Darr,” she said. “We want everyone to know that we have these programs. The College of Agriculture raises very good cattle, and the quality of the meat is excellent. We have award-winning wineries, and how cool is that? Sharing them on the show is a natural fit for us.”

And for viewers who get inspired and want to try Missouri State beef and wine? Rhonda Breshears of the Darr College of Agriculture shared that Hy-Vee and Horrmann Meats sell both beef and wine and that the wine is also available at the Brown Derby International Wine Center.

It’s the perfect way to dine like a Show-Me Chefs judge!