Kevin Agee has always relied on his intuition to lead him in the right direction.

In high school, he knew college was part of the plan — eventually, and he had confidence he’d know when it was time. So after graduating, he spent a couple of years working.

“There were times when I’d go to bed feeling like maybe it was time for college. But I’d wake up the next morning, and the feeling would be gone,” he says. “In December 2005, I went to bed with this same feeling. When I woke up, it was still there, and I knew it was time.”

A lifelong Springfield resident who’d grown up cheering on the Bears, Kevin had no doubt where he’d apply. He arrived on the Missouri State campus in early 2006 and ultimately chose a major that built on his interests.

“I wanted to create things,” he says, “and I’ve always wanted to be a writer.” He’d maintained a blog for years — contributing almost every day — so he knew he could handle deadlines.

Journalism seemed like a natural fit. And in many ways, it was. He was successful in his courses and enjoyed his time on staff at The Standard.

But because the department of media, journalism and film understands students need to experience this career path before graduating, journalism majors are required to have at least one applied learning experience within a professional setting. So Kevin embarked on an internship at a newspaper, where his intuition began whispering to him again.

He still loved writing. He still enjoyed the mechanics of developing the story. But, he says, “I didn’t like the process of tracking down sources and stories. I know now that reporters form relationships that make this process a little easier.” Even so, he suspected he might never feel at home in his original career choice.

“Because of that internship, I knew I didn’t have the right temperament to be a reporter,” he says.

He confided these doubts to his internship advisor, who guided him toward an adjacent career that better fit his personality. Kevin finished his internship credits at Missouri State’s office of athletics communications, where he found his true calling in media relations.

It felt more like the team setting where Kevin thrives. And all the skills he’d practiced as a journalism major — clear writing, research methods, attention to detail — were huge assets as he contributed to the Bears’ public relations strategy.

And for Kevin, the whole experience was just as valuable as it would have been if he’d loved his first internship as a reporter.

“To some people, college is about going to class every day, getting as good grades as you can and moving on with your life. But the most valuable experience for me was that internship, that ‘failed’ internship. I believe mistakes and missteps lead us to where we need to be.” 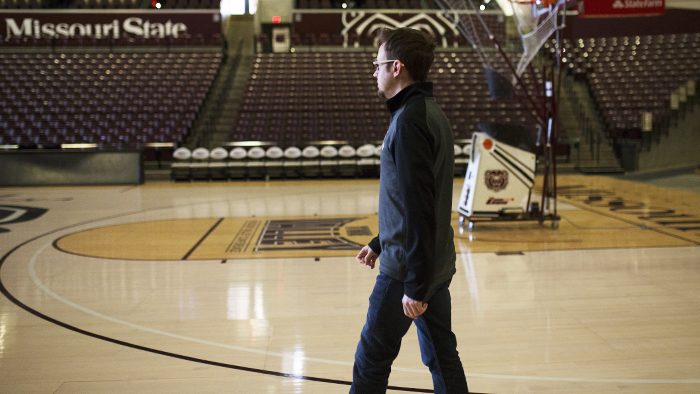 A few months after graduating, Kevin got the chance to return to the office he’d loved. Rick Kindhart, director of athletics communications, asked him to come back as a research assistant.

“They needed to compile a list of teams and championships for sports that were no longer active at Missouri State. It was a chance to make a little extra money, and it let me know that people in that office liked what I did during my internship,” Kevin says.

In some sense, he says, “It was a big flashing sign in the road, telling me ‘go this way.'”

This short-term research experience eventually led Kevin to a graduate assistantship, which supported his studies in the Master of Professional Studies program and allowed him to continue working with athletics communications.

After two years the term of his assistantship ended, and he had to seek employment away from the office he’d enjoyed so much. “I came very close to moving very far away because I needed a job,” he says.

But once again, his intuition intervened. “I went out and looked at it, and I just knew it wasn’t for me.”

Kevin stayed local and found part-time work creating sports-related content for a digital platform. “It was valuable,” he says, “because it was hard to be the writer, photographer, videographer, everything. It really helped me sharpen my skills.”

And then, after a few months, he found a posting for a joint position in Missouri State’s offices of communications and web and new media. “At that moment,” he remembers, “I knew that’s why I’d said no to the out-of-state job.” 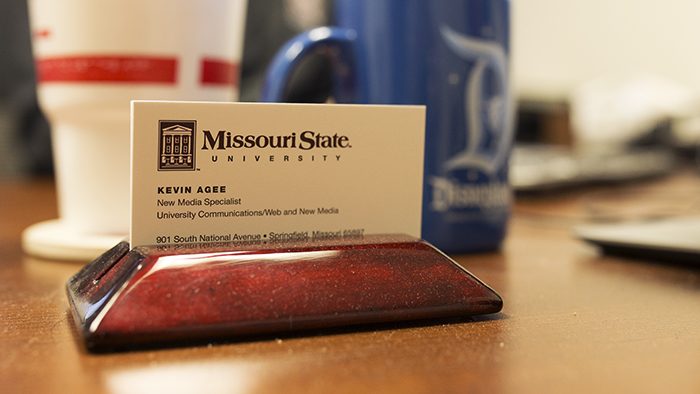 On the road to @MissouriState

After an in-depth interview process, Kevin joined Missouri State’s marketing and communications division, creating content and managing the university’s presence on Twitter and Facebook. He believes all the twists and turns of his journey brought him to a position that’s a perfect fit for him — one that leverages the writing skills he learned as a journalism major, project management from his Master of Professional Studies program and perhaps most of all, his love for the institution he calls “home.”

“A lot of students know what they want to do, and I think I had a sense of that also,” he says. “But I knew where I wanted to be more than what I wanted to do.”

As the voice of @MissouriState on Twitter, Kevin has earned attention for his witty, sometimes irreverent, always engaging style.

Related: If you'd like to learn why @MSUcampushawk terrorizes squirrels, @CNASatMSU has one heck of a biology department. https://t.co/buqtFuD7XO pic.twitter.com/uk1EfLvFl6

Ultimately, though, he says his voice isn’t the important one.

From Kevin’s perspective, “student voices matter 100 times more than our voices. They’re the ones living the experience. So when a student has a stumbling block of any kind, I care, and I’ll do whatever I can to help resolve it.”

Sometimes this means pulling in other units — from Residence Life to registration to academic departments and colleges — to help smooth the student experience. This process is made simpler by Missouri State’s active digital outreach, which often allows problems to get sourced and solved right on social media.

For Kevin, it’s all in a day’s work and part of the campus community he loves. “I don’t want to be anywhere else,” he says. “I want to be home.”