So I know that my last blog covered Singapore, but I would like to do another one on one of Singapore’s land marks, the Merlion. The Merlion is a  mythical creature that has the had of a lion and the body of a fish. The fish body alludes to that Singapore is a port city and is completely dependent on trade, especially back in the Temasek days. Temasek means “Sea Town” and was the earliest name of present day Singapore. The lion head is linked to the tale in the Sejarah Melayu, which descibes how the Prince of Palembang happened upon a lion upon setting food on Temasek. He renamed Temasek the island Singapura, which means “Lion City”. The Singapore Tourism Board meshed the two stories, and established the Merlion. With the exception of souvenirs, which must follow specific specifications, local citizens are not allowed to recreate any artifacts that feature the Merlion or anything that resembles it without first getting permission from the board. According the the board, anyone who is caught recreating the Merlion will face a $1000 fine per artifact they have. There are 7 Merlion statues placed throughout Singapore, all different sizes, the largest towers a huge 8 meters tall located in Merlion Park. The smallest statue is 2 meters tall and is referred to as the “Merlion cub”. Tough Merlion statues are found in Singapore, they have also been found in Shenzhen, China, and in Japan. I think these statues are absolutely beautiful, and can’t wait to see them with my own eyes. 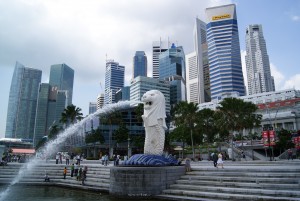