During this year’s Public Affairs Conference, theatre and dance students learned about social and political performance as well as large-scale puppeteering from the one of the oldest not-for-profit theatre companies in the nation.

In April Peter Schumann packed his Vermont troupe Bread and Puppet Theatre into a school bus filled with puppets, and after two 18-hour days on the road, descended on campus. Over three days they offered workshops along with 50 years worth of advice to several students who went on to perform in the culminating conference shows. 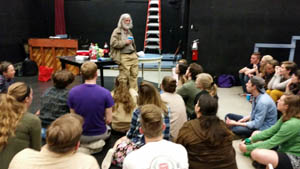 Assistant Professor Melanie Dreyer-Lude helped coordinate the Bread and Puppet events with Dr. Kurt Heinlein. She said the workshops were great opportunities for students to test their skills and expand their knowledge of what theatre can be.

“Students learned how theatre can be a metaphorical story as well as a literal one; that theatre can be political and change minds; that they have the endurance, talent and training to mount a show in three days.”

Being part of a ‘living and breathing sculpture’ 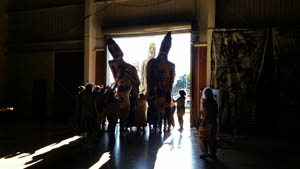 Senior Nick Oswalt, a theatre studies major, said the experience helped him learn to think on his feet, to be more selflessly part of a team and to use his voice and body in new ways.

“We were not building characters so much as we were all part of a larger-than-life, living and breathing sculpture,” he said. “This avant-garde performance art really showed me that since life oftentimes doesn’t follow a through-line story, art doesn’t have to either.” 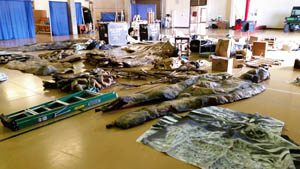 Bread and Puppet performances often explore difficult political and social issues and draw mixed feelings among audiences. Something Oswalt noticed when talking to people after the show.

“It was very clear that several were confused. Some loved it and some were grasping to find a narrative within the show. I don’t believe anyone left our show feeling indifferent to what they experienced. To see everyone at least thinking and discussing afterward, that was rewarding and unique.”