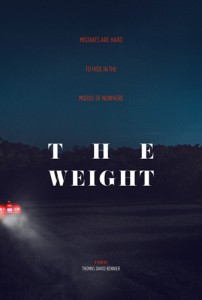 Several Missouri State alumni, students and faculty are involved in making the SAG-AFTRA union-supported movie “The Weight,” being filmed in nearby Greenfield, Missouri.

MSU connections to the film

Alumnus Thomas Rennier is directing the film, a noir thriller set in Dade County Missouri. His wife Jenna Rennier is also an alumna and is the film’s location scout. Greenfield is her hometown.

Dr. Kurt Heinlein, professor and coordinator of the acting program, is the film’s stunt coordinator, with senior musical theatre student Taryn Haley as his stunt assistant and performer.

Reagan Drake, a sophomore in acting, has earned a spot on the cast.

Other MSU ties include:

More about the film

Written by Thomas Rennier’s brother, Christopher Rennier, the film follows Julie, a recent divorcee who stumbles onto a small-town crime ring while trying to find her missing ex-husband.