Two months before Missouri State’s 2015 acting showcase in Los Angeles, Alicia Douglas was in her hometown of St. Louis for a cattle call audition — an opportunity to be seen by many casting professionals from across the U.S. hiring for theatre, television and film.

Douglas, now a musical theatre alumna, was excited when she was invited to a callback, but knew a February ice storm would hit soon.

“I thought, ‘I can beat this. I can be ahead of the storm.’ So I did the callback, said ‘Hi’ to my dad and then I left. I was fine up until about halfway to Rolla.” 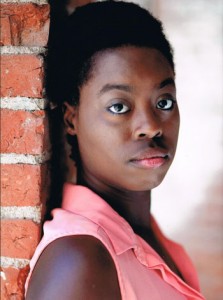 A few hours later, Douglas was in the hospital unable to walk after a car accident left her with two pelvis fractures.

“I basically T-boned a truck. And I honestly, to this day don’t know how I got out of the accident.”

Doctors were able to stabilize her bones without surgery, but warned that recovery would be long and painful as she was learning to walk again.

“I grew up as a dancer. I’ve been dancing since I was five … I didn’t know how I was going to make it. You think, ‘how am I going to do this career if I can’t walk?'”

Driven by her desire to make it to LA with her class, Douglas surprised them all when she was on crutches by spring break and back in class to prepare for the showcase. She even made the dean’s list that year.

Douglas,who graduated in December 2015, partly credits her theatre friends and faculty for her recovery, who supported her when her family — who live in St. Louis — couldn’t be here.

“It was the worst thing I’ve ever been through in my life. There was a time where I thought I probably wouldn’t be able to do this career. … The seniors and I had our own group message, and they said a lot of encouraging things. They kept me alive, I would have to say.”

Embracing the next challenge

Douglas recently returned from the 2016 musical theatre showcase in New York. Despite already graduating, the theatre and dance department invited her to participate in the week’s events: “That was really rewarding to be there with my BFA family.”

The accident, recovery and performing in both showcases has prepared her for the next stage in her journey, she said — be it traveling, graduate school or jumping into her career. She knows she can face any challenge.

“My senior year taught me determination and confidence in myself. I’m stronger than what I thought, you know. You don’t know how strong you are until you’re faced with difficult situations and the only thing you can do is just get through it, no matter how hard or painful it is.”