Each year, Missouri State arranges for acting, musical theatre and dance students to perform for and network with industry professionals in hotspots such as New York City and Los Angeles.

Hannah Green lightly hops up and down, her high heels clicking the floor to a steady beat. A few feet away, Nick Driscoll’s mouth is awkwardly poised as he quietly emits didgeridoo-like noises.

Others around the room are engaging in similar rituals, and the florescent light against a bright neon green accent wall offers no cover for the palpable tension.

Easing into a zone of energy and anxiety, one by one the 15 Missouri State musical theatre seniors walk through the door marked Studio 2. On the other side is a panel of casting professionals waiting for what could be — what hopefully will be — career-launching performances.

The musical theatre showcase, most recently held in March 2016, is one of three showcase events coordinated by Missouri State’s theatre and dance department to put university seniors directly in front of talent professionals who can offer advice — and maybe even a job.

In April, students travel to Los Angeles for an acting showcase, with events focused on the television and film industry. And each spring semester, the dance program sends students to performance conferences for similar experiences in their field. 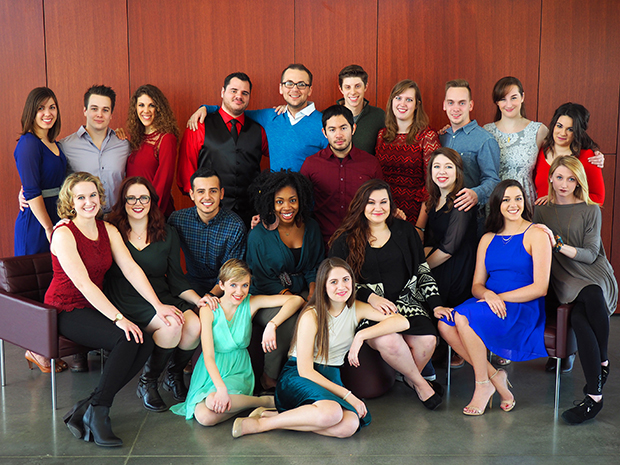 Acting Program Coordinator Dr. Kurt Heinlein said the exposure is invaluable, since it could take years to get an agent or to develop relationships with casting directors.

“This gives our students the opportunity to be seen before they even get out of school. It could save them five years of pounding the pavement.”

Heinlein said the trips also allow students to become acquainted with the scenes and cities in which they may eventually work. They also take industry workshops and connect to alumni living in those cities.

Sophomores and juniors often join the upperclass students to offer support and experience the city and workshops, too.

Other Missouri State visitors to the New York showcase include students in design, technology and stage management, the Missouri State Jazz Ensemble, and art and design students who show their works in galleries.

Heather Luellen, staff music director and accompanist, organizes the New York showcase. She said each program’s showcase is tailored to what works in that respective industry.

For live theater, Luellen wants to give students a preview of what happens in a real audition room.

“It’s great for the students to experience being in one of those spaces in front of a real casting director. We simulate that in classes all the time, but to really have that experience in New York is a fantastic way for them to be prepared when they actually move there.”

Anything is fair game, from the students’ appearances to song selections, talent, decorum and more.

Travis Holt, a senior musical theatre student, said the panel thought his songs were too similar.

“Since then, I’ve been building my repertoire with songs that show who I am as a person. I’m finding my type as an actor and working on how I can showcase that in an audition.”

The panel also said they saw him as a young romantic lead and encouraged him to embrace his Native American heritage when looking for roles.

A handful of students were advised to add comedy to their routines. According to one comment, “It has to be moving or funny. Everything else is just boring.”

The critiques given this year were pretty tame compared to some in the past. Luellen said this portion of the showcase is sometimes the most heart-wrenching part for students.

However, this is the real industry and she said the critiques are a good opportunity for students to see beyond the glitz and glamour.

During each year’s New York trip, students also perform a cabaret show accompanied by the MSU Jazz Ensemble. Their audience for the Cabaret and Connection event is largely alumni and friends of the university.

They wrap up the week with workshops, stage tours and more.

The Los Angeles acting showcase, in its seventh year, is thriving with a traditional showcase model, Heinlein said.

Students perform two-person scenes on stage for alumni and industry professionals, such as casting directors and agents. To be considered for the showcase, students must audition and spend the year leading up to it preparing in class.

“It’s really an artistic and curricular capstone experience for these students,” Heinlein said. “By prepping for the showcase, they learn about the industry, they learn about marketing, they learn how to be in business as an actor, not just how to perform.”

Students also participate in workshops, table reads, sitcom tapings and more. They spend time with working alumni, ranging from Academy Award winners to recent graduates, who share advice about what it’s like to begin in this industry.

Acting senior Leah Hawkins performed two scenes at the showcase. The experience has shown her a career in acting is possible,

“It’s scary to take that first step, but after being out there, doing the workshops and meeting with alumni, I feel more prepared. I can trust in my acting skills and know I have the tools to be a professional performer.”

Students start their day at 8 a.m. and end at 11 p.m., taking classes in various styles and performing in concerts adjudicated by dance professionals from across the country.

The adjudicators meet with students for two minutes in speed-dating-style feedback sessions. The judges comment on the choreography and determine which student performances will be presented in a national gala concert.

Barnes said the conference illustrates the possible career opportunities in dance, which may not be evident in Springfield.

“Students don’t know what’s out there. This is a way of exposing them to the enormous diversity in the dance world.”

Professional dancers often lead unconventional lifestyles, Barnes said. Few are paid well for performing, so they take on day jobs. They must be versatile and have a passion for dancing. Those are lessons students glean from the conferences.

“I left each adjudication feedback session with pages full of notes, advice and ideas for how I can choreograph successful and meaningful pieces in the future. I came back to school rejuvenated, refreshed and inspired to continue my work as a collegiate dancer.”