This week on our Student Spotlight series, we’re featuring Victoria Dickson, a senior B.S. Theatre Studies major with minors in General Business and Management. Victoria has spent her time both onstage and behind the scenes, fully exploring all areas of theatre through the B.S. Theatre program. She explains how the program has helped her grow throughout her journey here at Missouri State: “I love the BS/BA program because it allows me to learn about all aspects of theatre. I entered college not knowing exactly what I wanted to do, but by trying out the different aspects of theatre I’ve found what makes me happiest.”

In trying out these different aspects, her favorite roles have been onstage and in the director’s chair. Last year, she did both in a way that furthered her as an artist and gave her new experiences. She reveals, “I think my favorite onstage role was Twelfth Night, which was directed by Lisa Brescia. I was in the ensemble and was so lucky to learn first-hand how to do Shakespeare the right way. It was an amazing experience, and I know the whole cast feels the same way. Offstage, my favorite production has been Seminar written by Theresa Rebeck. I directed the show and really learned how to take an idea and bring it to life. Plus, since the cast was small, we all got really close and are great friends now!” Missouri State has helped to develop Victoria’s interests and skills in various parts of theatre, deepening her love for it.

Victoria stays busy here on campus with various activities and organizations. She is the Music Director of the Hibernotes, a co-ed a cappella group on campus, and says, “They’ve become my family here at MSU and I love singing with them.” She is also part of honor’s fraternities Phi Kappa Phi and Gamma Pi Alpha, but insists that her main focus remains here in the Theatre and Dance Department. Her love for theatre runs deep explaining, “I first got my start in theatre in Kindergarten; I was the “Mother Pig” in our production of The Three Piggy Opera. From then on, I was hooked. I’ve been doing theatre ever since!” Even when she’s involved in other things, theatre is first in her heart.

Victoria isn’t exactly sure what life after MSU will look like, but she has goals that she would love to pursue and achieve: “I know I’ll be moving to one of the coasts and start pursuing my goal of becoming a casting director.” Having Victoria as a part of the T&D family has been a delight, and we know she’s bound for great things, whether it be onstage or behind the scenes. 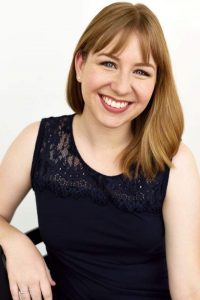