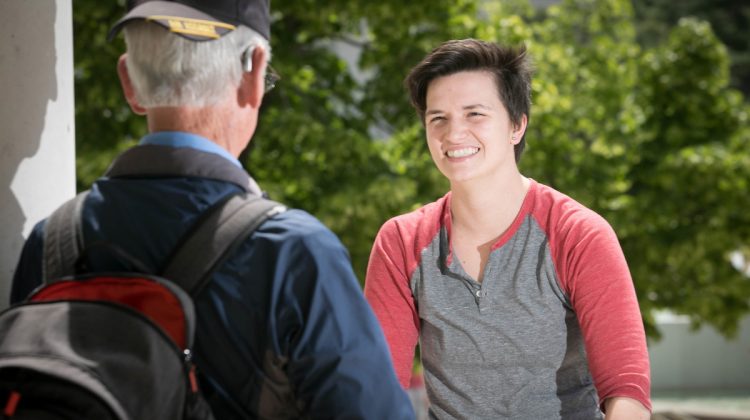 After 9/11, Deidre Ashley’s older sister brought home a packet about joining the Marine Corps. Only in the fifth grade at the time, Ashley watched the enclosed video and read the documents. Though her older sister never ended up joining, Ashley knew what she was going to do when she grew up.

“I served seven months at Camp Leatherneck, Afghanistan, a year at Camp Fuji, Japan, and three years at Camp Lejeune, North Carolina,” said Ashley. “The most rewarding experience was probably the experience itself. Not a lot of people get to experience everything that a service member does.”

When Staff Sergeant Ashley returned home after four years of active duty in the Marine Corps she knew she wanted to attend college. After considering NYU, her state of origin, she chose to attend Missouri State to stay close to family.

At Missouri State, Ashley served as president of the Veterans Student Organization (VSO), which serves to further personal growth and leadership through community and campus engagement by awareness, education and services. Following graduation, she was named an office support assistant in the Oldham Family Veteran Student Center.

“I help veterans understand their benefits and make sure they’re taking the right steps to get their tuition and fees covered by their specific GI bill,” said Ashley.

“Deidre is a hard worker and is a role model for all of the veterans who enter the center,” said Ziegler. “Not only does she train new hires and manage inventory, but she assists with the certification of VA benefits through the VA Once system, which requires 100 percent accuracy.”

After Ashley was informed that a local WWII veteran’s home had been damaged by a fire, she knew the VSO could help.

“I received an email about this veteran’s house being damaged by a fire,” said Ashley. “So I sent a few emails of my own and got a few local veterans together. We assisted in clearing the debris from the fire and spoke with the homeowner about his time in the military. I find that a lot of older veterans like to tell you their stories, and I enjoy hearing about them.”

Since graduating with a degree in criminal justice, Ashley has continued to focus on helping other veterans make the transition from military service to student life. She recalls her experience of being a new student on campus.

“It was a little difficult,” said Ashely. “I didn’t really know anybody. I started hanging out in the veteran’s lounge, started making friends and felt more connected to Missouri State. It’s very comforting to know that we do have a veteran community that we can bond with and become friends with. The veteran culture is very different. We’re so unique.” 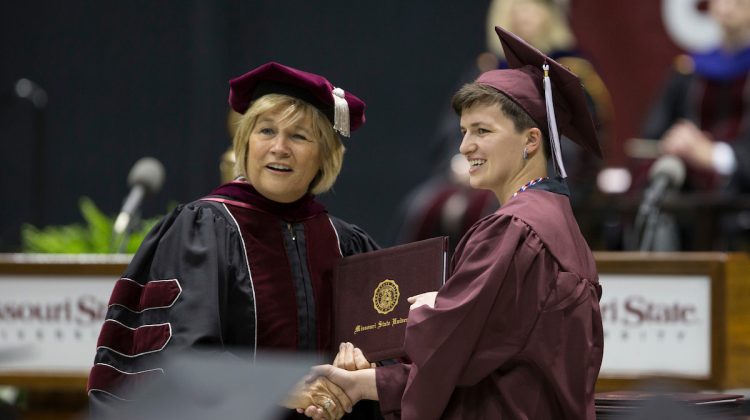 Ashley looks forward to spending her years after graduation continuing to help other student veterans.

“I hope to become a VA school certifying official,” said Ashley. “This person helps veterans and their dependents complete their certification request each semester in order for them to receive their benefits.”

Ziegler says that Ashley is a true #CitizenBear.

“Her willingness to go above and beyond to help any student, veteran or citizen in the community is what sets her apart,” said Ziegler. “She is genuinely compassionate about helping other folks and will often cancel her own plans so she can help others who need it.” 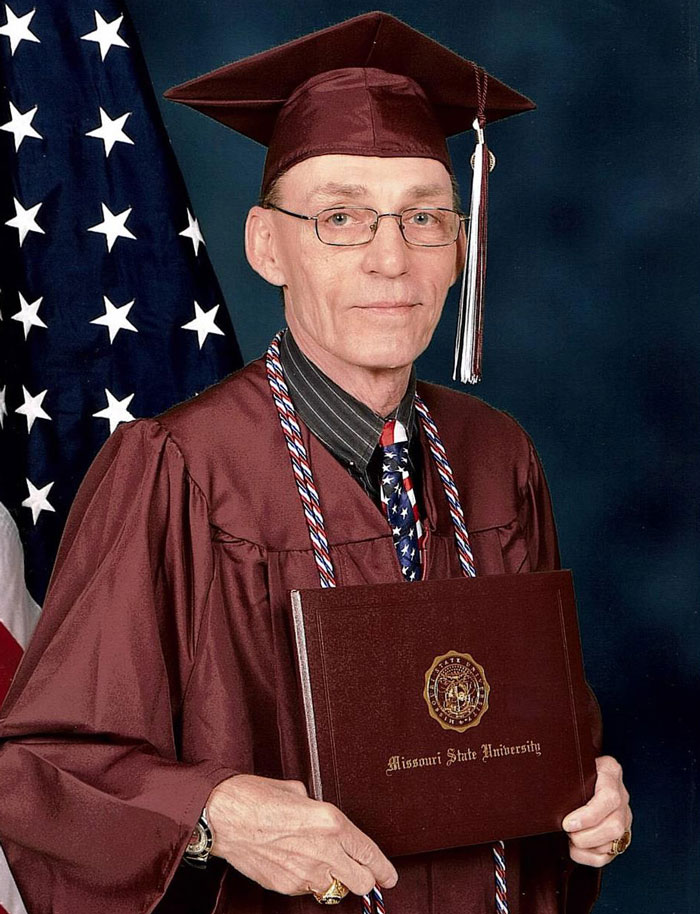 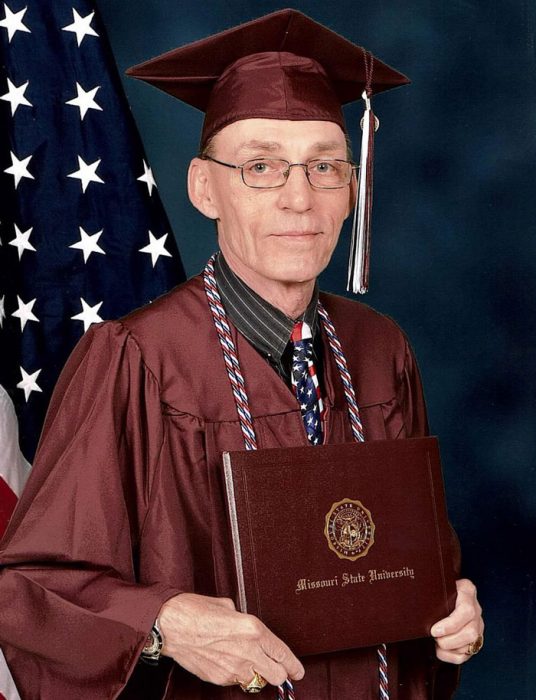 Missouri State student veterans continue to succeed during their college careers and beyond. The latest success story is one involving Mike Davis, a senior psychology major.

Davis recently earned the Recognized Associates Substance Abuse Counselor-1 (RASAC-1) certificate from the state of Missouri. With this certificate, he is able to conduct group therapy sessions, which is what he does at Burrell Behavioral Health, where he is employed. Davis works with adolescents (ages 13-17) as a substance abuse counselor.

“I was given the choice of working with adults or working with adolescents,” Davis said. “I prefer adolescents because adults are set in their ways, so to speak. In this type of work, you’re only able to reach a certain percentage. Whereas adolescents are at a young enough age that you can make a tremendous impact in their lives.”

For Davis to get the RASAC-1, he had to earn an associate’s degree, complete 280 hours worked as a counselor, pass a Missouri background check so he can be qualified to work with children and have a written recommendation from his supervisor. Once all of this was completed, he applied to the state of Missouri certification board.

Davis plans to earn his baccalaureate degree in May. Once he graduates, he will earn the RASAC-2, which would allow him to conduct one-on-one therapy sessions.

Davis wants to further his education after completing his undergraduate program. He wants to pursue a Master’s degree and become a licensed professional counselor for the state of Missouri.

Davis is a veteran of the United States Marine Corps who served during the Vietnam War.

The MSU veteran student community prides itself in the fact that many of its members have gone on to successful ventures after furthering their education. Davis is no different.

Now that the holiday slumber has passed, it’s time once again for another semester at Missouri State University. If you are a first-time student to MSU, welcome! If you are a returning student, welcome back!

Veterans make up a small portion of the total enrollment at MSU. Veteran Student Services is here to provide assistance for all of our veterans on campus as well as in the community. VSS is here to help veterans and dependents find resources both on and off campus to make their experience at MSU more manageable. VSS also has an orientation checklist for all incoming students to assist with enrollment and registration prior to attending classes. The checklist can be found on the VSS website.

We have a few changes coming to VSS in 2016. The most notable of which is that the office has hired a new director, CPT James T. Craig.

CPT Craig has served in the U.S. Army for 25 years. He currently serves as an assistant professor of military science at Missouri S&T, and has also served with military police. He has completed deployments to Kuwait, Iraq and Bosnia during his military career. Craig will assume the role of director in June. Until then, all questions and inquiries can be directed towards Raeleen Ziegler, our military/veterans transition coordinator, who currently serves as the interim director.

Another notable change to announce is that the GI Bill certificate of eligibility can now be accessed online from the e-benefits website, as opposed to applying for and receiving it through snail mail.

During their time at MSU, veterans and dependents can opt to join the Veteran Student Organization, a campus organization comprised of and managed by veteran students. The VSO strives to further personal growth and leadership through community and campus engagement by awareness, education and services.

GEP 101 Course: For Veterans/Military/Dependents (New Students): This course is designed to assist military members, veterans, and dependents as they transition into the MSU community. Offered in the Fall term, this course is a great way to help students develop better study habits, learn about office and campus resources, better connect with the MSU community, and enhance academic skills. Contact the Office for Veterans Student Services for assistance with registration and/or consult your Academic Advisor.

If you have any questions about how to register for this course please contact Veterans Services at 417-836-6199 and/or VeteranServices@missouristate.edu.

The summer term can be a difficult period to navigate. It is important that all students planning to utilize VA educational benefits confirm through the Department of Veterans Affairs whether their class enrollment will be fulltime, part-time or less. Only the VA can determine exactly what status a student will fall under. The guide provided in this link is only meant to serve as a helpful reminder, it will not be able to accurately determine your exact enrollment status for the summer 2015 enrollment period.

If you have any questions or concerns please do not hesitate to contact the Office for Veteran Student Services at 417-836-6199.