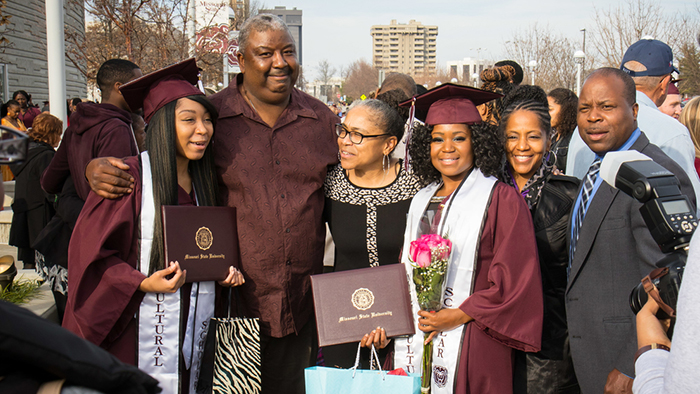 To promote the event, Web and new media utilized a variety of communication strategies, including the development of a social media kit, live social media posts, and live streaming the ceremonies.

The #BearGrads social media kit contained a variety of tools that assisted university departments and individuals in sharing their commencement experiences. These items included:

Statistics from the five days leading up to and including commencement day:

The most popular page was the fall 2015 commencement hub, which was viewed 4,271 times in the week leading to May 15. More than half of all traffic came from mobile and tablet devices, representing a small uptick in that category from the fall 2014 ceremony. Other statistics included:

What a great day. We're so proud. Thank you for joining us today to celebrate 1,501 #BearGrads. pic.twitter.com/R0qQN0v4Pa

The top two Facebook posts of the week separated themselves from the pack.

A video produced by Missouri State Photographic Services reigned supreme as a native upload on Facebook. The post:

The second-most popular post was a photo of student commencement speaker Kathryn Blair, which: 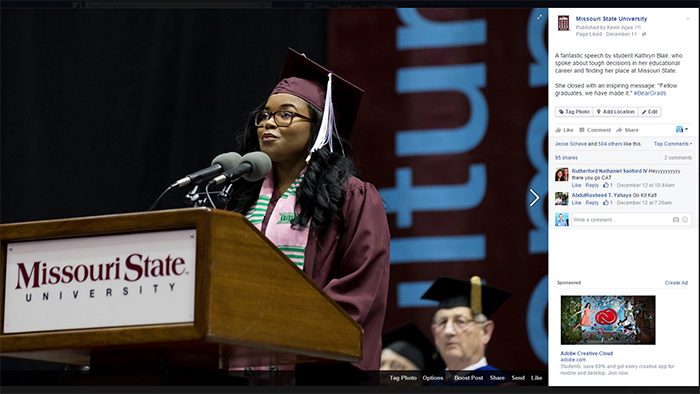 Missouri State’s Instagram channel shared four photos throughout the day, including one overhead image that displayed the joy #BearGrads felt on their day.

Of course, students drive social media success, and this year was no different. Some highlights of student-submitted social media content that appeared on the #BearGrads Tagboard.

“Oh the places you’ll go” Closed a big chapter in my life this past weekend. Thank you to all my amazing friends and family for supporting me all the way through, couldn’t have done it without you all! Can’t wait to see what’s next! #beargrads #onceabearalwaysabear 🎓🐻🎉 A photo posted by Leslie Byrum (@leslie_byrum) on Dec 15, 2015 at 7:31pm PST

Lil bro done messed around and got himself a bachelors degree. A combination of discipline, hard work, determination, and …consistency can go a long way. Congratulations on the accomplishment, bro. #beargrads #latergram #Clarendon @missouristate

In the words of Elle Woods, “We did it!” #BearGrads