Outlandish fashions, dance music and fads are iconic images of the 1970s, but for those who lived it, the decade was more than leisure suits and disco.

Over the next three months, Missouri State is bringing the 1970s into full color to demonstrate the profound political, societal and economic changes that took root during that time with the event series “The ’70s Experience: Always Being Now.”

MSU’s art and design department, College of Arts and Letters and College of Humanities and Public Affairs will host nearly 20 events to offer meaningful commentary about the 1970s.

The schedule will include a traveling photography exhibition from the Smithsonian, a theatre production of “Hair” (fully clothed!), film screenings and workshops.

Carolyn Cardenas, art and design department head, said Missouri State’s upcoming Public Affairs Conference, “Building Healthy Communities: Mind, Body and Soul,” inspired the University’s artists to draw parallels between a time in which many professors — herself included — came up as artists and the era in which their students are emerging.

“In a time when we are searching for diversity, this show reminds us that our journey somewhat repeats what has come before us. Civil rights, gender considerations, economic parity, environmental concerns and global perspectives teach us to value our differences, seek reasonable solutions and help those in need.”

Central to the series is the acquisition of the Smithsonian’s traveling exhibition “Searching for the Seventies: The DOCUMERICA Photography Project.” The exhibit’s striking color photographs are a portrait of America in the early- and mid-1970s.

The DOCUMERICA Photography Project was created by the Environmental Protection Agency to illuminate the decade’s environmental awakening, and the troubles and achievements that came along with it.

Shot by a number of well-known photographers and journalists of the decade, the exhibit depicts scenes across the U.S., from African-American life in Chicago to urban renewal in Kansas City, and from commuters in Washington, D.C. to migrant farm workers in Colorado.

Cardenas said the exhibit reminds us of lessons gleaned from the decade.

“I was an art student at Kansas University in the 1970s, and the need to find meaning in our lives and in our communities was ever-present. It was not unlike today’s millennials looking for success, and how they might try to right social and environmental ills. ‘Searching for the Seventies’ is an historical documentation of this search, and its era of experimenting with mind, body and soul remains the same path for young artists today.”

The Smithsonian exhibit will be on display March 4-April 19 in downtown Springfield at Brick City Galleries, 327 West Mill Street.

Photography students from MSU’s art and design department will

contribute to the exploration of themes found in the DOCUMERICA project with their own unique exhibit, to be showcased Feb. 19-March 23 at the Student Exhibition Center, 838 E. Walnut Street.

“Always Being Now” features photographs of life in Springfield and surrounding areas made students during the Fall 2015 semester. The photographs deliver a visual expression of world views of the millennial generation, exploring issues related to culture, the environment and identity.

Missouri State’s theatre and dance department will bring the iconic musical “Hair” to life on the Coger Theatre stage April 7-10.

Don your bell-bottoms and fringe for this block party

Alas, a 1970s-themed event series would not be complete without — you guessed it —disco and leisure suits. MSU will host a couple of events on April 8 to indulge your disco fever. 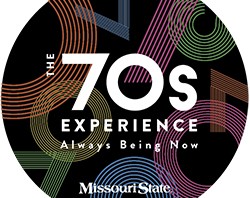 Down the street, there will be a costumed block party at Brick City’s south parking lot (215/305/327 West Mill Street) where “Hair” will have its cast party. The celebration of this production and semester-long project is open to the public — ’70s attire is encouraged.

Other notable events throughout February, March and April associated with this series include:

Visit “The 70s Experience” website for a complete schedule and event details.