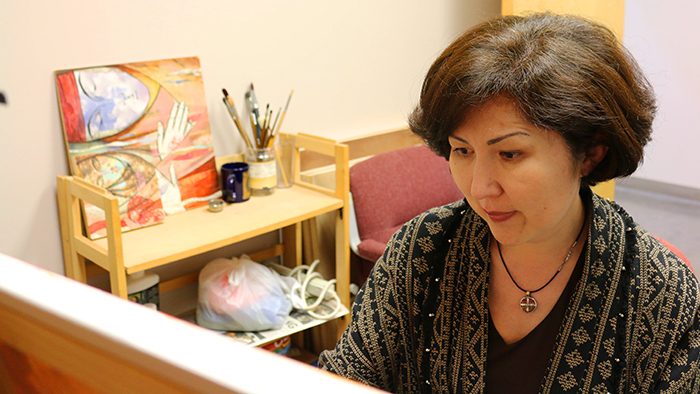 When Ainura Ashirova arrived at Missouri State to pursue her Master of Fine Arts, she’d already established herself as an effective arts administrator. She’d spent many years working for the British Council in her native Kazakhstan.

“I traveled to London often,” she said, “and I was a very successful arts manager.” Ainura also worked with the United States Embassy and Consulate in Kazakhstan, bringing American artists, performers and educators to her country.

“But,” she said, as she encountered great art and engaged with artists all over the world, “I came to a point that I wanted to do something on my own.”

In college, Ainura had trained as a set designer, and as a young professional, she’d worked in graphic design, so she had a foundation in classical artistic techniques and principles. “But I always felt I didn’t experiment enough, which is why I decided to try something different.”

After exploring painting, “I was excited about my improvements and eventually came to the idea of getting a degree.”

She first encountered Missouri State at the U.S. Education Fair in Kazakhstan. “I was just collecting information, but I felt something special actually,” she said.

Ainura spoke to Paula Moore, who told her about the Master of Fine Arts program and connected her to art and design interim department head Vonda Yarberry, who supplied more information about the MFA in Visual Studies and encouraged Ainura to apply.

About the MFA program

Missouri State’s Master of Fine Arts curriculum is designed to stimulate personal innovation and growth. For Ainura, this type of exploration was just what she was looking for. An early class in art theory pushed her to examine her artistic instincts and how they connect to her cultural heritage. “It was hard,” she said, but ultimately helped propel her to new achievements in both painting and mixed media collage.

“That is the meaning of this school,” Ainura said. “They stimulate you and allow you to experiment.”

According to Yarberry, “This approach reflects who we are as a department. We offer an intense amount of personalized attention on a student’s individual path of discovery.”

A look at Ainura’s work

Although Ainura was already an experienced international traveler, there were moments when coming to another country to complete her degree felt daunting. She knew nothing about Missouri but was encouraged by the U.S. Consul General to Kazakhstan, who has Midwestern roots. “He told me I would like it,” she said.

Such reassurance, combined with the warmth and accessibility of the faculty and the strength of the program led Ainura to choose Missouri State over three other graduate programs. Receiving a graduate assistantship helped, too. Overall, “it was the best and most interesting offer,” she said.

She laughed remembering other “small signs,” particularly one that occurred as she and her family observed a New Year tradition — just before she decided to attend Missouri State. They were eating chocolate eggs, each of which contained a toy or prize. Ainura and her family made a game of relating the toys to their expectations for the upcoming year. “And I got a small bear,” she said. “I didn’t know that MSU has the bear as a symbol, so I said, ‘a bear means strength and wisdom, and that’s good.’ But then when I decided to go to MSU, I realized it was exactly like the bear I see here at every corner of Springfield. Can you imagine?”

So far, Ainura has enjoyed being a Bear. She likes Springfield’s friendliness and is happy that it’s smaller than her hometown, Almaty, which means she can be almost anywhere in 10 to 15 minutes.

And she’s glad that her son is with her as she works toward her degree. “I wanted him to have this experience as well. I was thinking I would be learning art while he would be learning English. It will be an adventure for us.”