Dolls are popular tourist-trade items throughout Mexico and northern Central America.  The styles of the dolls have changed over the decades, with some adopting a more generic or international “stuffed toy” form; the dolls continue, however, to be adorned with traditional dress, and this has provided a valuable record of changes in these traditions over time.  Some dolls are also portrayed engaging in specific activities and with particular objects, from carrying a homemade backpack with camping materials to sitting at a traditional backstrap loom; these dolls provide a valuable record of traditional activities.  As such, these dolls provide not only educational souvenirs and an important record of traditions, but also a steady source of income for struggling communities and an impetus to continue to record changing traditional practices. 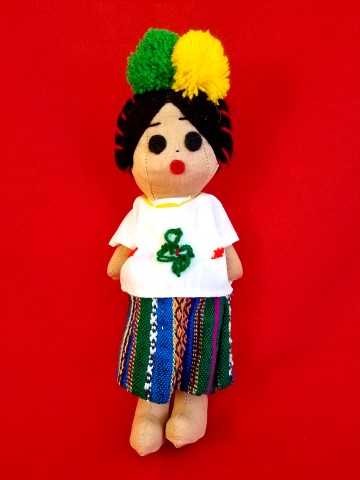 These two dolls are typical of handmade dolls that are produced in 21st-century indigenous cooperative workshops, and they wear the traditional Maya garb of Sacatepequez, Guatemala.  The female figure wears a huipil, or popover blouse, with a very simplified version of an embroidered design; a long, hand-woven, multicolored skirt; and a colorful wrapped headdress.  The male figure wears a woven straw sombrero; a hand-woven, multicolored shirt; white woven pants; and a woven belt and apron.  These heavier garments are more typical of the cooler highland regions of Guatemala. Researched by Ngozi Ekeke 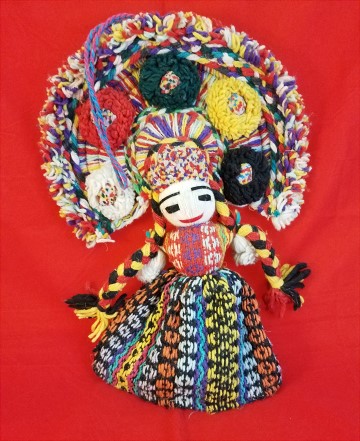 These two dolls are made of imported acrylic yarn, but they depict dancers in the traditional Zapotec Mestizo Dance of the Feathers, a dance performed during the Guelaguetza, an important annual cultural festival in Oaxaca.  The Dance of the Feathers derives from an earlier Aztec-style dance that was adopted by the Zapotec after the Aztec conquered the Oaxaca region in the Postclassic period (900-1521 CE).  The Zapotec version of this dance has developed into a reenactment of the Spanish conquest of Mexico.  The feature that most clearly identifies these figures as performers in the Dance of the Feathers is the huge, rounded headdress; however, what is unusual about this pair of dolls is that this costume is generally only worn by men, as this is traditionally a male dance. Researched by Ngozi Ekeke

The style of this doll, with its soft-stuffed body, round eyes, triangular nose, and V-shaped mouth, is typical of dolls produced by descendants of the Otomí cultures of Central Mexico.  The yarn or ribbon-wrapped pigtails, the embroidered blouse, and the long, multicolored and lace-trimmed skirt are also typical of this style of doll.  Researched by Ngozi Ekeke