You are here: Home / Alumni Spotlight / Entrepreneur and trailblazer wants Broadway to be accessible to anyone, anywhere

Jessica Ryan, ’03, has always given her all on stage. Her giving nature carries over to the behind-the-scenes work of show business.

She lives in New York City, the hub of the theatre world. She is the chief executive officer and co-founder of the studio Broadway Unlocked, and its sister technology company, All Together Now.

Ryan uses technology — including livestreaming, social media and other interactive tools — to connect digital and in-person audiences with theater performances.

She also engages others with digital content as the founder of the production company misterdangerous.

“As patrons of the arts, our heartbeats sync up when we are in the theater together,” Ryan said. “With the intersection we’ve created between arts and technology, more people can share in that excitement.”

There’s a common theme in Ryan’s work: the desire to fuel accessibility.

After her time at MSU, Ryan met Haben Girma — the first deaf-blind person to graduate from Harvard University. Girma inspired this focus.

“We had a long conversation about the ways in which blind and deaf individuals can still enjoy a digital concert if you have the right tools,” Ryan said. “This motivated our team at Broadway Unlocked to use a live interpreter for shows above a certain size. Many also feature live captions with streaming.”

These practices became possible through a partnership with Detroit-based Invest in Access.

While Ryan is proud of these changes, she understands there is more to do. The pandemic further highlighted this.

“COVID-19 has ushered in an ‘accessibility’ frame of mind. More people recognize that factors like financial ability, varying physical abilities and geographic location don’t have to stop them from being a part of live experiences,” she said. “The accessibility questions we are asking with our work show there could be audiences we have yet to find.” 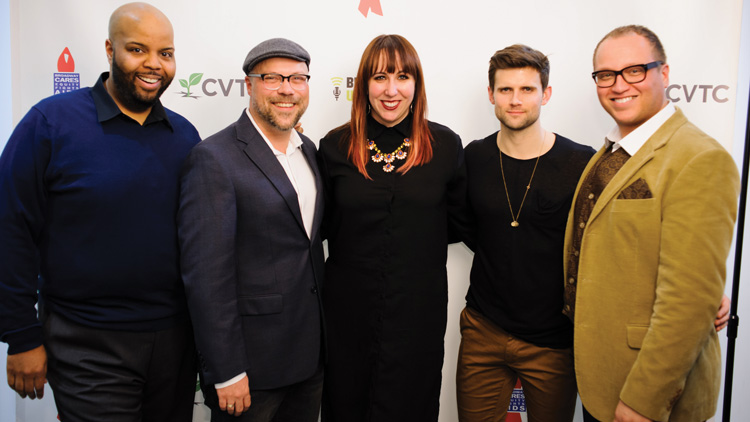 Giving back, moving forward with help from MSU alumni

To find new audiences and fuel more opportunities, Ryan partners with fellow MSU graduates who have built careers on Broadway.

Blackwell serves as creative and cause director of Broadway Unlocked. He is also Ryan’s co-host for the #GiveBack concert.

To date, Broadway Unlocked has raised $250,000 for the Crime Victim’s Treatment Center.

“I’m most proud that this advocacy came from almost all small donors,” Ryan said. “It was a lot of people, with a little to give, coming together to make a huge impact.”

The #GiveBack concert will resume in spring 2022.

Broadway Unlocked will also host a live concert from the Waldorf Astoria in October to benefit Maestra Music, an advocacy group for “the women who make the music in musical theatre.”

A debut digital festival created by Blackwell, called “Uninterrupted.”, will follow in February 2022. The festival will amplify Black voices in support of Black History Month.

“We have this chance to build something strong and long-lasting in the industry through our work,” Ryan said. “It will be an accessibility renaissance.”

Looking back at Missouri State as a source of direction

Ryan always knew her career would take her to the stages of New York City. She considers MSU to be where her professional experience began.

“As musical theatre students, we had the extraordinary privilege of performing at the professional roadhouse of Juanita K. Hammons,” she said. “We also made our own shows at the Springfield Contemporary Theatre and the Landers. These were incredible stage opportunities.”

The ability to perform and show-run prompted her interest in entrepreneurship.

“Such low-risk opportunities to start flexing my skills in that area were so beneficial to my career,” Ryan said.

She also credits the mentorship she received as a driving force in her career.

“They offered the quality advice I needed and were there to lean on as I implemented it within my work,” she said. “I would happily share similar wisdom with any MSU students in entrepreneurship or theatre — particularly women — who ever come to New York or reach out by social for advice.”

Professor: Ryan is “the full package as a leader in musical theatre”

Despite a busy schedule in New York City, Ryan stays connected to her alma mater.

She has participated in Tent Theatre and has helped audition incoming freshmen.

“The event brings together alumni,” she said. “It also connects current students with alumni, agents and casting directors.”

The showcase event went virtual this year among concerns of the pandemic. Ryan’s company All Together Now powered the platform that made the experience available for live viewing by industry.

Robert Westenberg, professor and coordinator of musical theatre, worked with Ryan on the showcase events and applauds her efforts.

“Jessica is a brilliant entrepreneur — one who is on the cutting edge of both creating and delivering live content,” Westenberg said. “She can also act, sing, dance, direct, choreograph and produce. This makes her the full package as a leader in musical theatre.”

Ryan stresses that others in the MSU community can play a part in inspiring change by volunteering their time and knowledge to worthy causes.

“I never accepted that all the right pieces needed to fall into place to make a difference,” Ryan said. “Everyone can help drive change wherever they invest their passion and a strong voice.”

Where should this process start? By getting to know the communities you wish to serve, Ryan said.

“If there’s something you wish to advocate for, sit in the space of that community and ask what they need,” she said. “Learn about their circumstances and find ways to collaborate.”