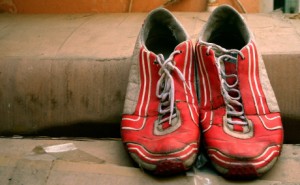 Join MSU as we partner with OTC, Drury, Evangel, and SBU to conduct a massive record-breaking shoe drive for Sole Food.  This project embodies the MSU Public Affairs Mission as well as the 2014-2015 public affairs theme, The Ethical Citizen: Can you make a difference?  The shoe drive will take place on all five campuses, Fall 2014 ending on October 25, the National Day of Caring.

You CAN make a difference!  Clean out your closets, ask your neighbors, tell the grandparents and during Family Weekend, bring your gently worn shoes to donate. There will be drop-off boxes located at family events (exact locations to be announced closer to Family Weekend).

Sole Food is a non-profit organization that collects used shoes (any type without holes in the soles) then sells them to the Shoeman Water Project.  Shoeman then sells the shoes which are distributed in third world countries.  The money raised by selling the shoes is used to buy a water filtration systems in third world countries and the money paid to Sole Food is given to the Friends Against Hunger organization which packages meals for those in need around the world.