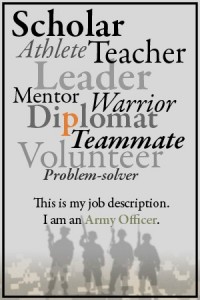 Being a U.S. Army Officer is one of the most highly respected and competitive careers in our country today. However, it is one that is achieved and accomplished by less than .01% of our population. Coach Lou Holtz, General Colin Powell, Sam Walton, Justice Samuel Alito and many others have jump-started their civilian careers by becoming an Army Officer through the U.S. Army Reserve Officer Training Corps (ROTC).

Missouri State students who are second-semester sophomores or Masters students, who are physically fit and have no more than two academic years remaining, could qualify to attend the Army’s Leaders Training Course (LTC). This course is a four-week basic leadership course during the summer and taught at Fort Knox, Kentucky. All expenses (flight, meals, lodging) are paid by the Army, and the student receives nominal pay for his/her time there. What’s pretty cool too, is that students have no obligation after completion – they can walk away without any military obligation if it doesn’t suit them. Successful completion of LTC fulfills the MIL 101/102 and MIL 211/212 “Basic Courses” taught here on campus. The course is designed to give Juniors and Masters students the ability to enter the ROTC Advance Course and commission as an Army Officer in just two years. Not only that, students who attend and complete the Leaders Training Course can apply for full-tuition scholarships, or get Tuition Assistance through the National Guard or Reserves. The benefits are truly impressive.

What do you do at LTC? The course is divided into four phases of training, and although it is a four week training period of intense classroom and field training conducted in the summer at Fort Knox, KY, it puts students on the “fast-track” to having a great career opportunity after graduation.

Phase One: This is a basic “introduction to the Army” to teach cadets skills and knowledge necessary to successfully participate in the next three phases. Cadets have described this phase as “teaching them what right looks like.”  Specifically, cadets learn military customs and courtesies such as saluting, how to wear the uniform and how to march.

Phase Two: This part of their training covers adventure training, which builds both cadet self confidence and unit esprit de corps. Focus is on individual skills as a precursor to learning group dynamics. Cadets learn basic military skills in order to function as a small group member and leader.

Phase Three: This phase is the course’s “Capstone Exercise.” Cadets are exposed to squad level operations where ROTC cadre assess the student’s leadership ability in a field environment. The Field Training Exercise (FTX) is intentionally tough and introduces the element of stress. Throughout the exercise cadets encounter physical and mental obstacles that challenge them as a person and leader.

Phase Four: This portion of the cadet’s training introduces them to the social aspect of the Army. Final briefings are conducted as well as a Family Day in conjunction with a cadet-led graduation ceremony.

Make no mistake. Becoming and being an Army Officer is a challenging journey that requires dedication, commitment and a willingness to learn and improve mentally, physically and emotionally; but the rewards are great, and the profession is highly respected and honored.