Zoe Pixler, Family Orientation Coordinator, sat down with Marli Coonrod, a sophomore from Nevada, Missouri and a member of the Student Government Association where she is Director of Student Affairs: Engagement, to ask the question “What does Student Affairs mean to you?” (First in a series of articles about the Division of Student Affairs at Missouri State.) 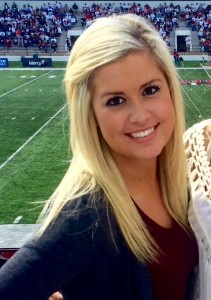 Zoe: How would you explain student affairs to someone that knows nothing about it?
Marli: There is so much to it! One of the easiest charts I have found is through the student affairs website and that can be found by typing in ‘student affairs’ in the search bar on the Missouri State homepage. It is a breakdown of each department that is under student affairs. There are so many, and that is partially why there are two committees for student affairs in SGA. To me, student affairs is centered on student life. I feel like they are the ones that are specifically focused on the students. That is what made me fall in love with student affairs.  Here are these administrators that focus everything they do around us and want to make sure that each student’s college experience is everything we want it to be.

Zoe: What is your position and what are your daily duties?
Marli: I serve as the director of student affairs for the Student Government Association and my daily duties depend on what day it is. I go to meetings a lot with administration. The meetings are usually with the departments I work with which are the Bookstore, Residence Life, Plaster Student Union, Dining Services and Rec Center. Those are the main people I meet with a lot.  I also meet every other week with Dr. Siscoe, Vice President of Student Affairs and give her a report on what’s going on with my position. My other counterpart, Zach Wilkerson is the director of student services. My main goal is to engage with the students. I like to refer to my job as the “fun job” because I get to bring all the exciting things to campus. Right now some of the things we are working on is a survey with Chartwells to get students opinions on adding a new vendor to the PSU. I also have office hours in the SGA office. We have cabinet meetings on Monday nights, Senate on Tuesday nights, and then I also have a meeting with fifteen people that work on my committee.

Zoe: What made you decide to get involved in the SGA and work with Student Affairs?
Marli: I met our current student body president, Ashley Crisafulli, at the beginning of my freshman year and she pushed me to join SGA. I went into it thinking that I would just get a little involved because in high school I didn’t hold a lot of leadership positions. I started watching her and she became one of my role models. I saw everything she was doing and that was exactly what I wanted to be. She pushed me to step up in everything possible. She was the director of student affairs last year and I was on her committee so that’s how I learned about Student Affairs. I also served on AIS, which is Administration Information Services, but I enjoy the student aspect more.  This position is one of the best things that has ever happened to me. It might sound silly, but Missouri State’s motto ‘follow your passion, find your place’ is so true for me. I found mine through SGA. Without it I don’t think I would be as happy as I am now because I love everything about it. I never would have imagined that I would be that invested in something because I never saw myself as a leader before it.

Zoe: What advice would you give a student that is interested in student affairs?
Marli: The first step they could do would be to join SGA and one of the student affairs committees. If they are interested in the aspect of bringing improvements to the PSU, bookstore, dining services or any visual areas people see then student engagement is the one. Then there is also programing and services that Zach Wilkerson manages. That is more like the career center, Taylor Health and deals with more of the services aspect. There are a ton of things under the student affairs umbrella, and I think that is really cool. Just by joining one or both of the committees would get your foot in the door. I remember getting to meet President Cliff Smart through this committee.  There are so many opportunities and it can help you make a lot of connections.

Zoe: What do you think are the important factors for student success at Missouri State University?
Marli: Number one is definitely involvement. That is my thing, I always push student involvement. Statistics have shown that students who get involved in at least one organization their freshman year are more likely to continue on their education path and end up graduating. Here at Missouri State there are over 300 organizations so you are bound to find one for you. And if not, you can create your own! One of the cool things I have been doing with another girl since this past spring is bringing a first generation organization to Missouri State.   Our hope and goal is to organize a mentor-like program of juniors and seniors mentoring freshman and sophomores.   Number two would to not be afraid to spread your wings. This could mean hanging out with people that are completely different than you or trying something new. You’re never going to know unless you try and college is the perfect time to explore.   I think my number three would be to go to class. It sounds super lame, but class is not about learning the material in your classes. You’re going to make friendships and you could be sitting next to someone that has connections that could get you a job in the future. Building connections is very important in college because we all want to get a job after college. College isn’t just about learning about books and history, just sitting in the classroom you can find so many extra perks.

Zoe: How do you think first year students typically respond to the term ‘student affairs’?
Marli: I feel like a lot of people still are not aware of what student affairs actually is. They can pinpoint the buildings and the different departments on campus, but they don’t realize they are all together under this big umbrella of student affairs. One of the things I try to do through my position is to bring awareness of student affairs. The students need to know that everything these departments do is specifically for all of us. Honestly, our university would not be as great as it is if we didn’t have that supportive staff in student affairs.

Zoe: What is your favorite tradition at Missouri State University?
Marli: I would have to say Play Fair because I was a facilitator this past year and it was one of the most fun experiences of my life. I remember coming as a freshman and hardly knowing anyone.  It was during welcome weekend so everything was happening at once and it was overwhelming but you want to participate. I think it’s really cool to see both sides of it play out, as a freshman just last year and then as a facilitator. Welcome Weekend is literally new students’ first experiences at Missouri State and to have the whole weekend dedicated to them is just a really cool experience and so much fun.
Marli (pictured above) is the senior Panhellenic delegate for Alpha Delta Pi, a member of the Ursa Experience committee, the Public Relations Student Society of America and she is a 2015 Emerging Leader.