Take a moment to get to know Scott Morris, LTC US Army, Department Head and Professor of Military Science, Missouri State ROTC.

Tell us about your career path to Missouri State. I grew up in Vancouver, Washington.  I graduated from high school in 1992 and went to college at the United States Military Academy, West Point, NY.  After initially pursuing appointments to the Naval Academy and the Air Force Academy, I was offered a slot at Navy as a football recruit.  In the 11th hour they changed their mind, and at that point a normal appointment to Navy was not an option.  I was angry, so I contacted their rival, the Army Football team, and was offered a scholarship to attend their preparatory school (one year prep schools are how the military academies red shirt athletes since they are strictly 4 year institutions).  As I was preparing to embark on that path, I was offered a direct appointment through the normal House of Representative nomination process when another candidate backed out at the last moment.  So it’s a bit of a long story, but the short answer is that I chose Army because I was mad at Navy! 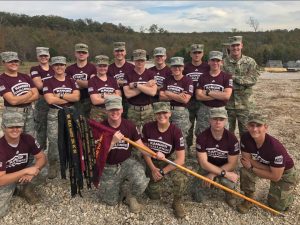 I graduated from West Point in 1996 and was commissioned as a Second Lieutenant in the Army Field Artillery.  I served first at Fort Hood, Texas with the 4th Infantry Division, then after my promotion to Captain I served with the 17th Field Artillery Brigade at Fort Sill, Oklahoma from 2000-2003 where I worked as a Logistics Officer and Battery Commander.  Following that assignment I went to graduate school at Long Island University, C.W. Post.  I earned my Masters in Counseling and Leader Development in 2004 and went on to earn my National Counseling Certification (NCC).  I then served as part of the faculty at West Point from 2004-2008.

Following that assignment the Army sent me to school again, this time at the Command and General Staff College, where I spent a year in classes designed to prepare me for higher level assignments.  I went on to serve as an Advisor to two Iraqi Federal Police Generals as a part of the 3rd Infantry Division in Baghdad in 2010.  My follow on assignment was at Fort Lewis, Washington where I served as an Operations Officer (Director of Operations) and Executive Officer (Deputy Director).

In 2013 we moved back to Fort Leavenworth, KS where I served as Division Chief (Manager) and Lead Planner for an organization that ran large scale training exercises for high level Army staffs (Division and Corps level that have several thousand soldiers assigned to them).

In the summer of 2015 the Army sent me here to Missouri State to become the Department Head and Professor of Military Science.  I live in Ozark with my wife and two sons.  In my spare time I am a Boy Scout Leader and an Assistant Football Coach for my son’s Junior High team.

Why is the ROTC an important program to our students, our university and our country? What does a student gain from being a part of the ROTC at Missouri State?  That’s a great question.  The average person does not understand what the Reserve Officer Training Corps (ROTC) is.  Many are familiar with the Junior ROTC program in high school, which is a citizenship program.  Senior ROTC in college is officer training.  The name doesn’t help clarify things either.  We aren’t exclusive to the Army Reserve.  We actually commission most of our graduating Second Lieutenants into the Active Duty component, and a fair share into the National Guard as well.  The ROTC name and brand are pretty historical at this point so they have not changed the name.  Bottom line, ROTC is the nation’s premier leadership development program.  It produces the largest share of the Army’s new officers (Second Lieutenants) each year and has produced many of our nation’s leaders in both the public and private sectors.  The program’s focus is on developing leaders of character for our nation, in and out of uniform.  Army ROTC is flexible to any personal goals that students have.   Upon graduation from college, graduates of our program can serve on Active Duty, in the National Guard, or Army Reserves.  Though the majority of our graduates compete for and win active duty positions, many also serve in the National Guard and Reserves, which allows them to immediately start careers in business, education, etc.  Army ROTC is also the number one source of scholarship dollars in the United States.  It’s a great way to avoid debt as you start your new career.  ROTC is not a major.  You can major in any subject you want.  Military Science is a minor that you can earn by completing our classes.

Can you share a brief history of the Bear Battalion here at Missouri State? Though there was some officer training at MSU during WWII, Army ROTC did not arrive on campus until 1952.  For the first 20 years or so it was mandatory for every student to take 2 years of ROTC (commonplace across the country as part of the land grant act).  When ROTC was changed from a mandatory class to an elective, The Bear Battalion started to add other partner schools.  We now have cadets at College of the Ozarks, Evangel, Drury & Southwest Baptist, though the majority of cadets are MSU students.  MSU ROTC has a reputation as one of the most successful programs in the nation.  We have produced 14 Officers who have obtained the rank of General Officer, two Mayors of Springfield (to include the current Mayor), and many highly successful leaders in business and education.  This year we’re ranked number one in the region for quality of graduate, and number 42 out of 275 programs nationwide.  Our Ranger Challenge Team has won three consecutive Taskforce Championships (9 cadet team) and 6 out of the last 7 years for the 5 cadet team.  We compete annually against Mizzou, MO S&T, Wash U, Lincoln, Truman, SIU-E, SIU-C, and Pitt State.

As you approach your retirement, what do you want your legacy with the Bear Battalion to be?  An emphasis on values.  Throughout my time as the Professor of Military Science our focus has been on character development.  If the program does one thing right, it has got to be instilling in our cadets a strong moral footing.  Leadership challenges often place people into unfamiliar territory.  When this happens, and you have no experience to fall back on, your decisions will be guided by what is at your center- your values and morals.  Ethical leadership is what is needed most.

What are some of the best lessons you have learned from your time in the Army?

1.       Live by the Golden Rule.
2.       Everything in life worth doing is hard.
3.       You were given two ears and one mouth.  If you use them in that ratio, you will be successful.
4.       Accept responsibility for your actions.  Credit for success belongs to everyone on the team.  Responsibility for failure belongs to the leader.
5.       Disagreement is not disrespect.  Candor is an often forgotten value that is critical.
6.       You can disagree with someone and still work with them, find the common ground.
7.       Little in life is black or white, most is in the gray area that lies between.  This is where leaders operate.  Don’t be afraid to wade into the fog and bring clarity.
8.       If you are not messing up every once in a while then you are probably not trying hard enough.
9.       When in charge, be in charge.  Be bold.
10.   Leaders eat last.

What is your favorite Missouri State Tradition? Why? I’m a bit bias, but it has to be firing the cannon at football games, and at other University and community events.  Last year we re-named the cannon “Major General Marty” after Fred Marty, class of ’63 who had been the Chief of Field Artillery for the Army.  “Mighty Marty” is a lot of fun to fire, and as a career Field Artillery Officer, it’s nice to be around at least one cannon!

What’s the last book you read? Would you recommend it? Why or why not? The Subtle Art of Not Giving a F*ck, a counter-intuitive approach to living a good life, by Mark Manson.  It should be mandatory reading for all college students.  He’s a bit vulgar at times, and in your face as the title implies, but he tackles tough subjects such as resilience.  He delves into what people prioritize in their lives as important… and not be important (and how to decide).  His approach speaks directly to the younger crowd.  I can’t recommend it strongly enough.  All of my students have read it.

(To find out more about the ROTC Bear Battalion, visit missouristate.edu/milsci/.)