Missouri State alumna and daytime TV legend Kay Alden Nelson recently returned to campus to share her expertise with students. Nelson, who is credited for her writing as Kay Alden, has a decades-long career writing for “The Young and the Restless” and “The Bold and the Beautiful,” including several years as the head writer for “The Young and the Restless.”

During her career, Nelson has been recognized by a number of organizations. Her awards include:

She has also been recognized with Missouri State’s Outstanding Alumni Award.

This was Nelson’s second visit with writing students during the 2017-18 academic year.

“Kay Alden Nelson is a model of success for student writers. She’s thrived in a volatile industry, and she has such important insight to share with our students,” Amberg says. 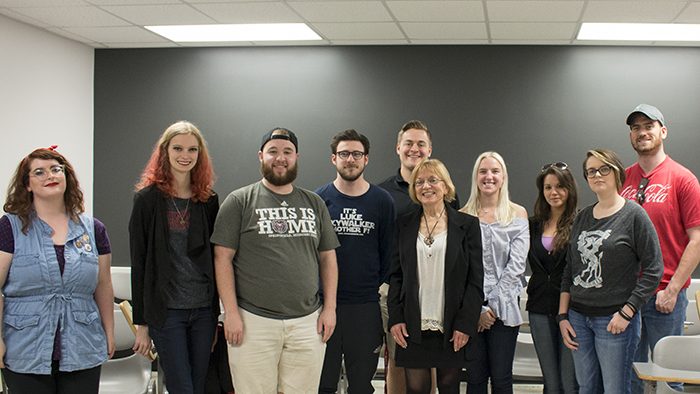 Amberg likes to introduce Nelson by recognizing her volume of produced credits. “We’re in an industry where writers are always trying to get something produced, and even getting your short film on screen is hard,” he says. “When Kay is here, the students get to interact with someone who has more produced credits than the sum total of everyone else they’ll ever meet.”

He says, “Our students find her visits incredibly meaningful and inspirational — not only because of how clearly she speaks to them about the craft and the industry — but also because she’s created characters they’ve known for years. I’m thankful they have these opportunities .”