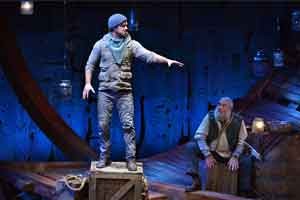 Performances are being held at the Spencer Theatre in the James C. Olson Performing Arts Center in Kansas City, Missouri. For show times and ticket information, visit the website or call 816-235-2700. The play is appropriate for ages 13 and up and contains language depicting scenes of graphic violence.

Castrey, who is also the show’s musical director, plays the Musician. And although he has no speaking parts, the myriad instruments he plays brings a large presence to the stage in support of the Poet, played by Kyle Hatley, KC Rep’s resident director.

Castrey has served as an MFAA faculty member, lead teacher, interdisciplinary arts/arts integration specialist and academy coordinator before becoming the academy director in 2012.

He is an emeritus member of the theatre and dance department, where he provided music and soundscapes for departmental productions and classes for 29 years. He has created more than 70 works for theatre, dance, and video productions, and has performed in almost every imaginable, and some unimaginable, music venues.