Every May, students are invited to participate in the BFA Senior Showcase in Los Angeles, California. At the showcase, students are given the opportunity to perform in front of many industry contacts and hopefully find an agent. The showcase has proven to be beneficial for many Missouri State students.

We caught up with two recent graduates, Sam Valentine and Hannah Duncan, who both performed in the BFA Senior Showcase in May. The two performed exceptionally well and gained professional representation as a result. Being new in a very competitive industry, both have made substantial professional progress. 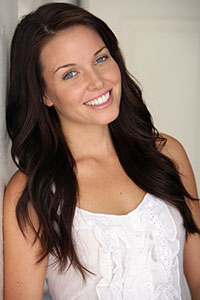 Two days after graduation, Sam Valentine made a solo move to LA. With a great deal of feedback from the BFA Senior Showcase, she started working with a voice-over agent and a commercial agent. It took six months of auditioning through her agents and her own submissions to book that first national paid job, a Discovery channel commercial for the show “Investigation Discovery.”

Upon returning from Paris, where she filmed a promo for an international touring company for students and young professionals, Valentine booked a national voice-over spot for McDonalds. Valentine’s former professor, Dr. Kurt Heinlein, comments, “In a commercial actor world in the digital age, this is a big deal; thousands of actors from around the nation are submitted for national spots.”

Valentine adds, “If I was to give advice to current students looking to move to LA, know that it’s probably one of the hardest things you’ll ever do, but so worth it. For every acting job I have gotten, I’ve probably gone on 50-60 auditions I didn’t get. Be confident in yourself, but without thinking you know exactly how it’s going to go out here.” 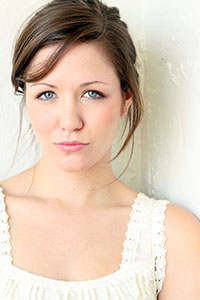 For Hannah Duncan, the showcase also planted a desire in her to move to LA and provided her a great start to working in the city. “The MSU BFA Acting faculty did a wonderful job planning workshops with people in the industry, many of whom I keep in touch with today,” Duncan explains. After graduating from MSU, Duncan shot a commercial, a web series, and then spent the summer north of Denver playing the title role in the play, “Calamity Jane”.

Duncan made her move to LA via a job working for a well-known actor/writer/producer and a new manager she gained through the BFA Senior Showcase and persistent contact. Auditions are scheduled at least 4-5 days a week, with multiple auditions a day. In the first few weeks of auditioning, she booked a commercial, a voice-over spot, and a sketch comedy show in Hollywood. After signing with her current agent, Duncan performed at a Cabaret in Hollywood and shortly after that booked a small role on the tv series, “Men at Work”.

Duncan keeps in contact with other MSU alum working in LA. “There is a small, but mighty group of Missouri State University alums working hard out here, and they are all so incredibly supportive; it’s like having a family.”

Duncan adds a bit of advice on auditioning, “Don’t wait and hope to book, it’s a competitive industry so you may be waiting several years. When you audition, do your best then forget you ever did it. If you get called back it’s a nice surprise, but never wait for one audition. Auditioning is your job and getting booked is a vacation.”

For more information on the BFA Senior Showcase and performance opportunities, visit the Theatre and Dance website.