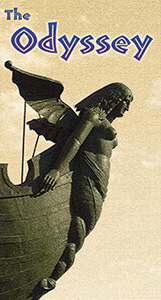 This fresh adaptation of Homer’s epic poem, “The Odyssey,” tells the story of Odysseus, King of Ithaca, and his 10-year journey home from the Trojan War. Weary of battle, he wants nothing more than to return to his beloved wife and son, but his progress is beset by perils, including the Sirens’ song, a witch’s spell, the monstrous Cyclops and the possessive goddess Calypso. Meanwhile in Ithaca, his wife is besieged by unruly suitors who covet his castle and lands. Aided by the goddess Athena and the kindly king of Phaeacia, our hero overcomes all obstacles!