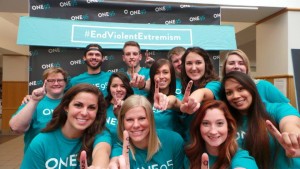 Congratulations to the Missouri State Ad Team! On Friday, they received news they get to present their One95 campaign to the U.S. Department of State in Washington D.C. in June. Out of 23 competing teams, they were the only U.S. team picked. As part of the P2P: Challenging Extremism competition, they will compete against two other teams from Australia and Canada. Like the One95 Facebook Page or Follow on Twitter to find out more.

Every spring the Missouri State Ad Team competes in a national university competition to develop and implement a campaign for a specified client. They are on a quest for their third consecutive first place national title. Last year the Ad Team won the Challenge Your Energy IQ Case competition for The American Petroleum Institute. Two years ago they won the national AT&T Campus Branding Challenge.

Way to go Ad Team and good luck in D.C.!